I thought I would start this posting with more of a “how to” approach rather than “this is the result”.

The technique I use for making buildings has developed over the last thirty years and involves etching detail into an epoxy putty spread over a cardboard or MDF form.

First the tools and I use only five. Top to bottom in the image below they are:

• A pallet knife (in fact I use a rigid butter knife)

• A craft knife with retractable blade 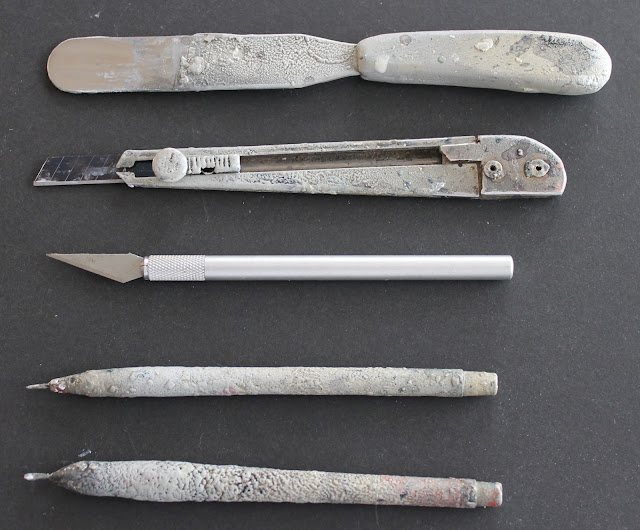 I use two types of putty:

The first is a local product called EmerKit – a fairly course putty that is relatively cheap, safe to work in the hands, easily spreads across large areas and has a work time of about two hours (and cure time of three hours – although a full cure takes 24 hours).

The second is Green Stuff – a much waxier putty for fine or fiddly detail. 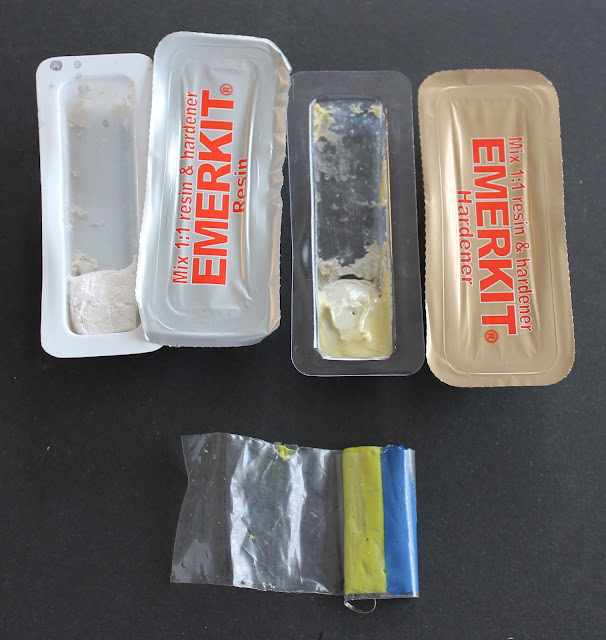 So for this evening’s work I start by mixing up some EmerKit with one part resin to one part hardner. After all of the years of using this stuff I know roughly how much I need to cover a given area, but I nearly always make sure that have some other project ready to go, just in case I mix up too much.

Using the pallet knife I spread the putty over the form to about a 2mm thickness. It is often necessary to wet the pallet knife to prevent epoxy from sticking to the tool. When it was spread across the form I trimmed it acordingly. 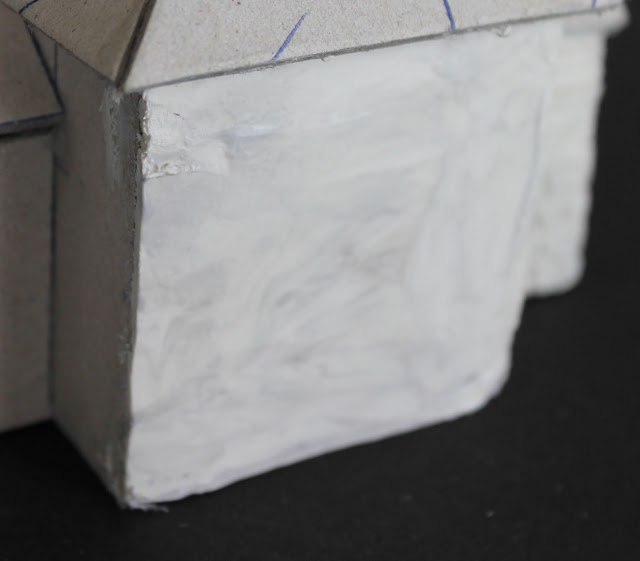 Then, using the craft knife, I sketched out the line of any detail – in this case the upper edge of the stone work and the outline of the window. 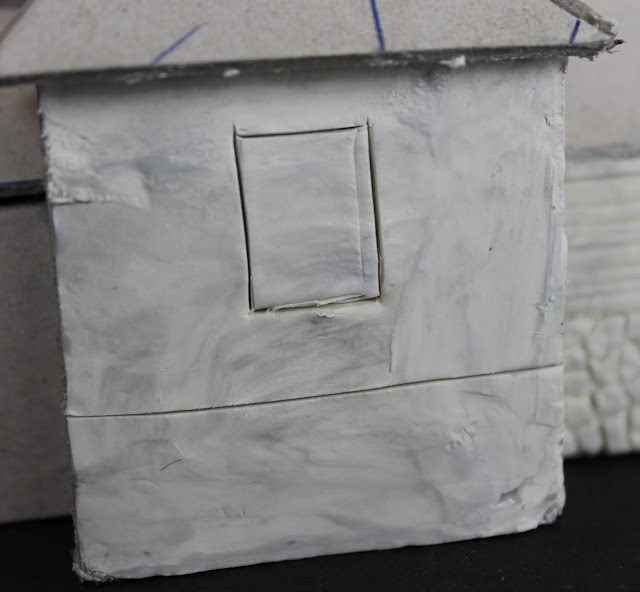 I then cut out and removed the putty from the window area.

Next is the timber texturing. I started by simply cutting a series of fine horizontal lines to emulate wood grain. Then I cut deeper lines to define the edge of the boards. I then had to clean up the edges of the windows. 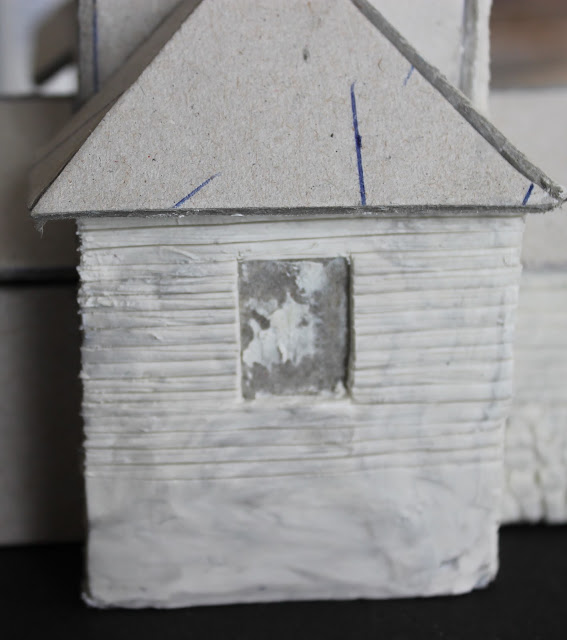 The final step is to use the second of my custom tools (the screwdriver like one) to create the stone effect, simply by pressing into the putty to create the outine of a stone, keeping things as irregular as possible. When this is finished I used the rounded end of an old paint brush to create a few dimples on the stones. 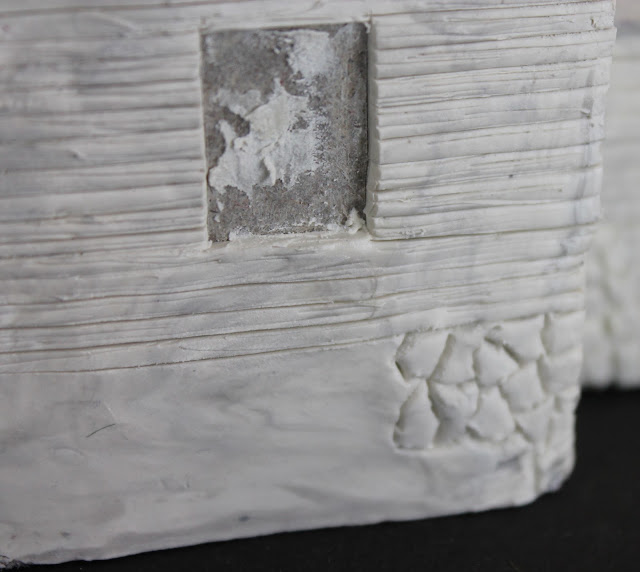 Then the epoxy is left to cure. Curing can be accelerated by heating in the oven (when her indoors is not around of course). That said, care has to be taken with the heating because if the item is heated to more than 100 degrees it can expand and bubble, destroying the surface. I usually set the thermastat to 75 degrees to avoid this. Under heat a workable cure can be achieved in about 15 minutes.

Now for the results for thie evening’s work. 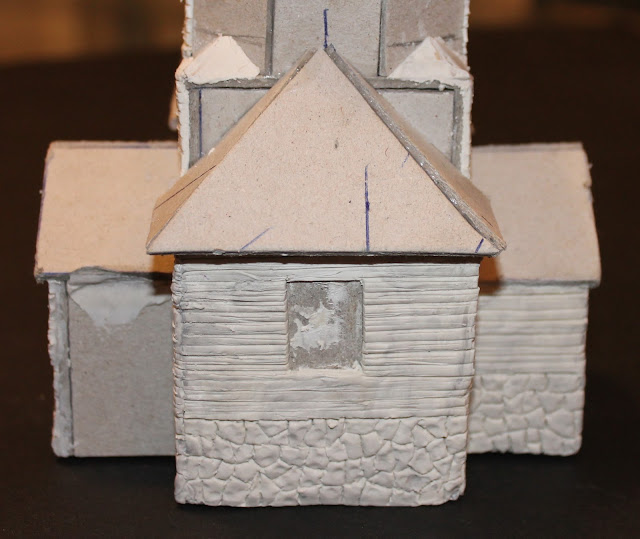 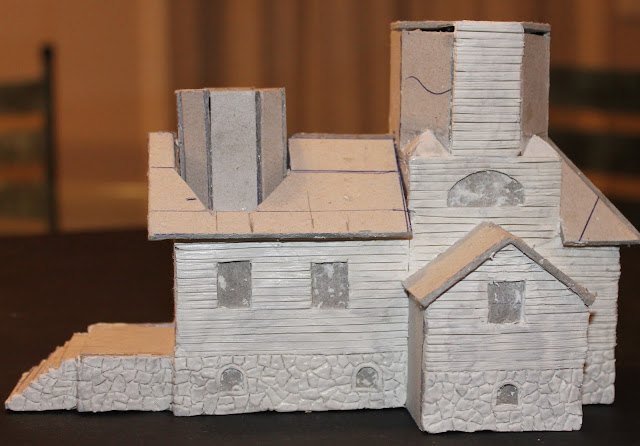 There is only the front door and a couple of small walls to complete on the lower part of the structure. Then it is onto the spires and roof.
Posted by Mark Strachan at 11:48