In the last two weeks I have been completing the WWI armies.
The main focus has been on the British infantry company which is now complete (not based yet), but I have also finished off the last two stands of the Belgians. I am in the middle of painting the artillery - a section of 13pdrs.
The shots below are of the Company command, from the Musketeer Miniatures BEF range. 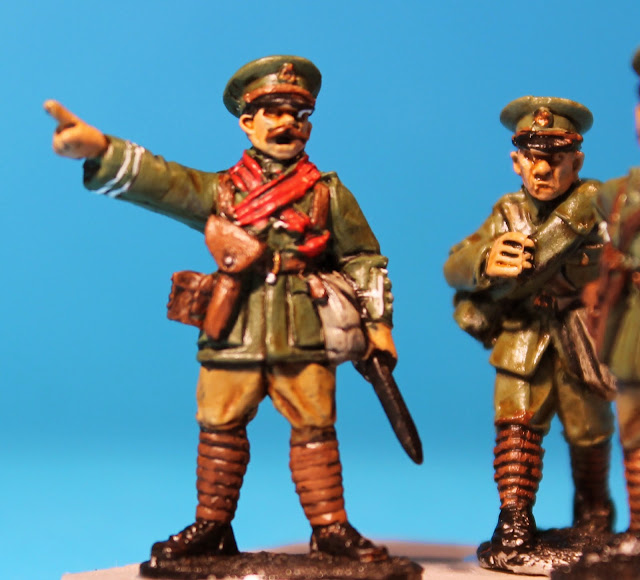 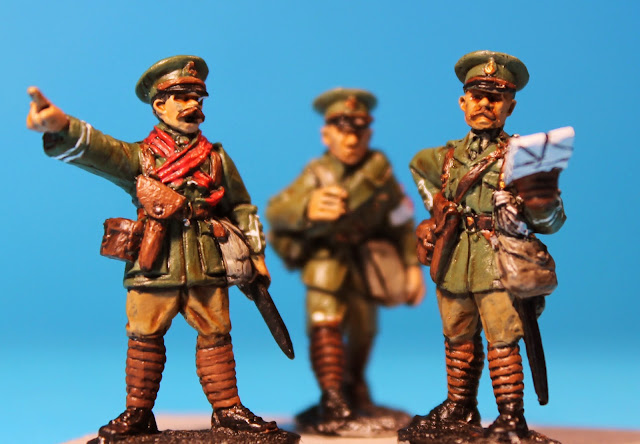 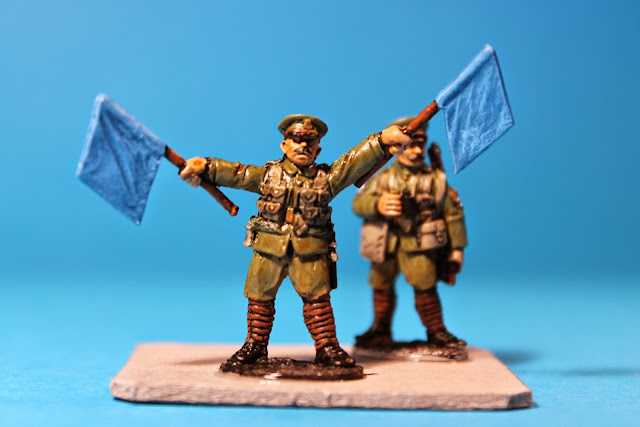 I have also been working on the French high command, the new set from Great War Miniatures 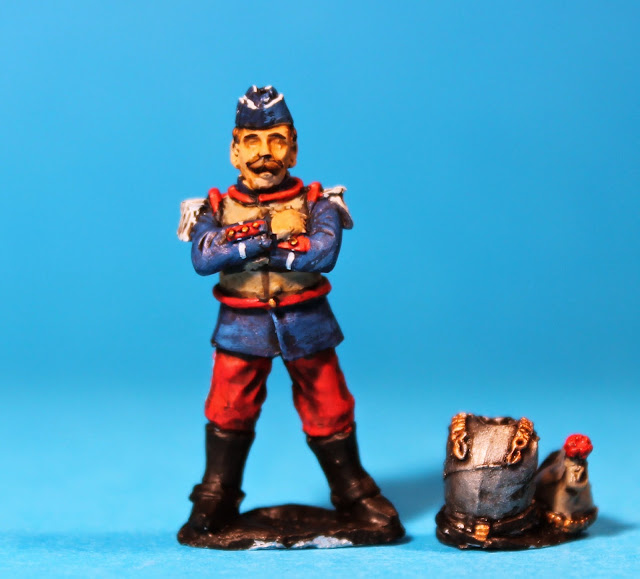 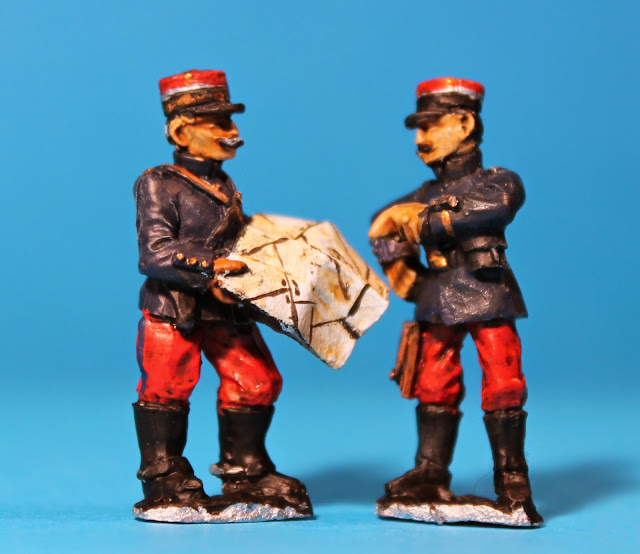 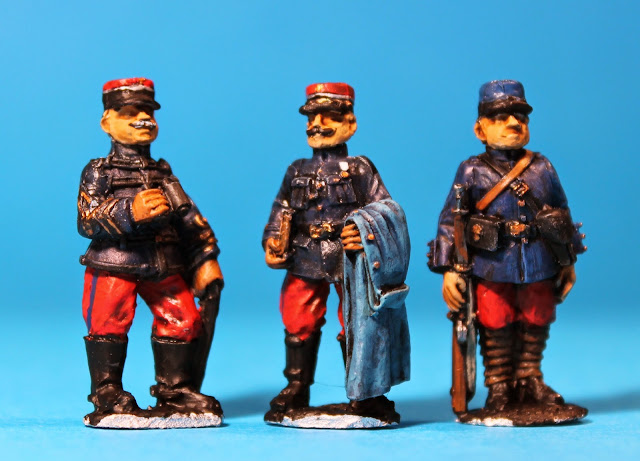 Posted by Mark Strachan at 11:20 No comments:

Email ThisBlogThis!Share to TwitterShare to FacebookShare to Pinterest
Labels: WWI

Now that work on the 1866 navies is complete, I have returned to the early WWI project in earnest.

A parcel of Great War Miniatures containing the last company of German infantry, one 77mm gun and crew, plus the final few Belgians arrived two weeks ago. The Belgians and the gun are complete (including the scratch built limber for the gun) and I have painted the infantry, but not finished the bases. There was a fair amount of cleaning up on the German infantry. This finishes the Germans, giving them:

• one platoon of jägers (on bicycles and on foot)

• one platoon of uhlans (mounted and dismounted) 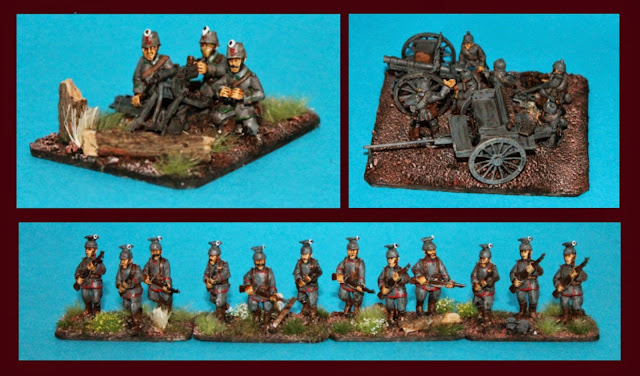 • a platoon of dragoons (mounted only) 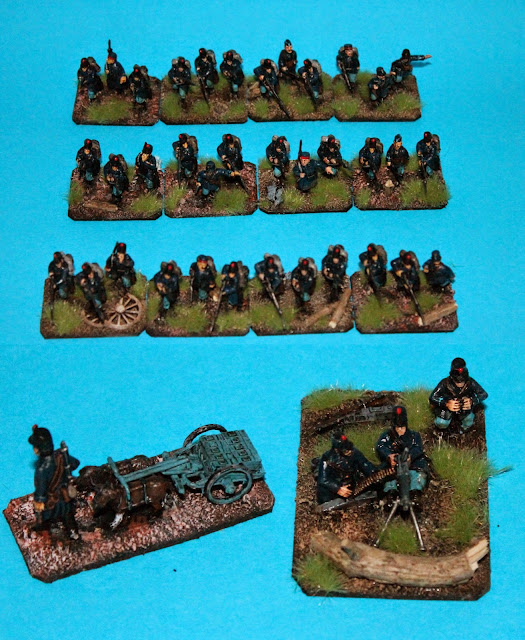 The first of the British have arrived. I have ordered the figures from three different suppliers: Great War, Musketeer and Mutton Chop Miniatures. This means that of the 57 figures I need for the British company, 40 will be different. The Mutton Chop and Musketter figures have arrived already and are stunning. In fact I must say that the Mutton Chop and Musketeer Miniatures models are some of the nipcest figures I have ever worked with.

The whole British force will be:

• a troop of lancers (mounted and dismounted)

While various coats of paint are drying I am working on a few terrain pieces like these barbed wire entanglements.

Also associated with this project is the buildings project. This consists of a town of sixteen intact buildings and sixteen corresponding ruins. All of the intact buildings are finished and there are only got three ruins to complete. A large farm, outside of the original scope of the buildings, is also in progress (in fact it was started about six years ago and gathering dust ever since).
Posted by Mark Strachan at 16:51 No comments:

Today we played an 1866 naval fleet action using my recently completed 1:600 scale Italian and Austrian fleets.
We had four players. Of the Austrians one player took command of all of the ironclads, seven in total, while the other player took control of the wooden ships, one ship of the line, four frigates, one corvette and one gunboat. The Italian fleet was divided into two squadrons, one consisting of seven ironclads, while the second squadron consisted of five ironclads and two wooden frigates.
The Italians moved first. Because they had a significantly larger force of ironclads, the second squadron was held back for two turns. The two opposing fleets were sufficiently distant that it took four turns before the first ships came into range. The Italians turned first and opened fire, but every shot bounced harmlessly off the Austrian hulls. 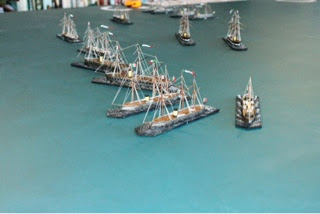 The Italians Turn
The Austrians sailed directly for the Italians aiming to ram them. Don Juan d'Austria slammed into Regina Maria Pia. The Austrian ship did damage, but failed to sink the Italian vessel. The Don Juan was stopped dead, but the Italian slipped away. Meanwhile the Kaiser Max rammed the Re d'Italia, with decisive results. The Italian vessel sank on the spot, although Kaiser Max had her steering damaged and was forced to turn hard to port for two turns.
The Italians soon struck back ramming the Don Juan with the two ironclad corvettes, sinking her on the spot.
By now the Austrian wooden ships had entered the fray. Despite their powerful broadsides, they had little impact on the Italian fleet. It was the ironclads that continued to do the damage. Another Italian ironclad went down. 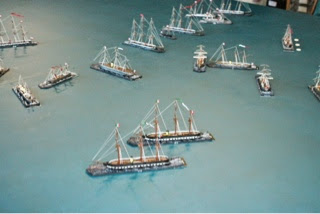 The wooden ships from both sides enter the fight
Then the Austrian frigate Radetsky, that had lost control of its steering accidenally rammed the Affondatore. But this was a wooden ship against an ironclad and result was quite predictable: Radetsky sank, causing only minimal damage to Affondatore. 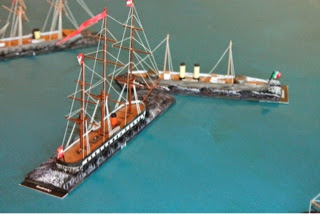 Radetky' fatal accidental ramming of Affondatore
The whole table was now a swirling mass of ships. Three of them had lost control of their steering and were steaming in circles. Most of the broadsides proved ineffective. 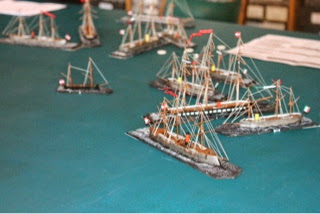 The circling fight
Next it was the Austrian wooden ship of the line Kaiser, that was to suffer. Despite her massive broadside, she found it difficult to do any damage to the Italian ironclads that dominated that site of the table. Kaiser, her paint still soft from the painting table, was consigned to the depths.
Finally the Austrians were able to get a critical hit on Castelfidardo and she sank. Here the game ended. The Italians had lost four ironclads to the Austrian's one ironclad and two wooden ships. Two more of the Austrian ships had taken significant damage, but their remaining wooden ships were now up close to the more vulnerable Italian ships, and were in good condition. One of the Italian ironclads was in a very poor state, two more were heavily damaged and one of the wooden frigates was very low in the water. The Austrians took the honours for the day. 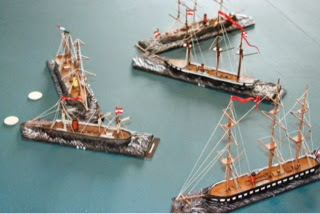 The Austrian and Italian fleets for 1866 are complete and ready for action.
The Italian fleet (below) consists of twelve ironclads and two wooden frigates.

The Austrian fleet consists of seven ironclads, one wooden ship of the line, four wooden frigates, one wooden corvette and one gunboat. 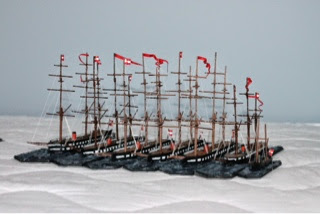 The Austrian ironclad ships
Both fleets will take to the "water" this Sunday in a fleet action.
With this project complete, its is back to the WWI now. The last batch of German ingfantry have arrived and the British have been ordred and shoule start to arrive next week.
Posted by Mark Strachan at 17:04 No comments: