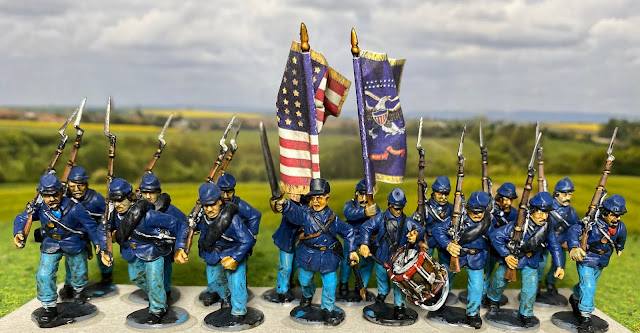 ...and a rather well dressed Virginia regiment that I based on the VMI cadets from the Battle of Newmarket that inspired me when I watched the movie “Field of Lost Shoes”. 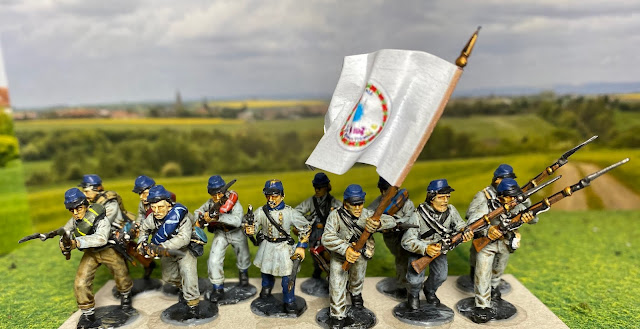 Several more ACW units are in the pile.

Following on from my earlier post I have been making trees to get a break from painting ACW figures.

Readers may recall that in the experimental tree I used a trunk made from Sculpey and I was quite happy with that. But I had a whole bunch of bare trees - sans foliage - that I made way back in 2005 when I put on a refight of Pea Ridge. That battle was fought in the  winter, so I built a collection of winter trees, some from Woodlands Scenics but the most I scratch built - all trunks and bare branches.  players in that game will remember it clearly because when moving troops in the woods they were likely to be stabbed by one of the trees. These have been sitting in the garage since that time and I thought why couldn’t these be repurposed by adding foliage using the same method described earlier.

This was the cause of another experiment where I took the bare tree, that was a wire armature.... 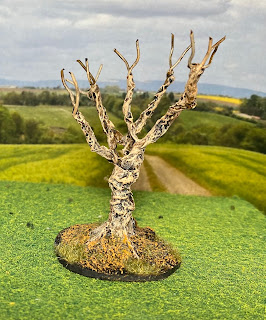 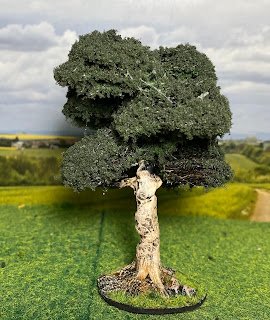 I liked the effect, but it needed some tone. I thought first of applying a lighter green turf, but chose instead to lightly spay the foliage with a bright yellow. Spraying this from a distance provided just enough of a highlight and has the added advantage of helping to secure the foliage. 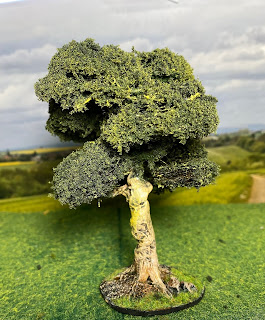 So with this second experiment completed I set about adding foliage to another seven bare trunks.

The same trunks with their coconut matting foliage attached, ready to be sprayed black. 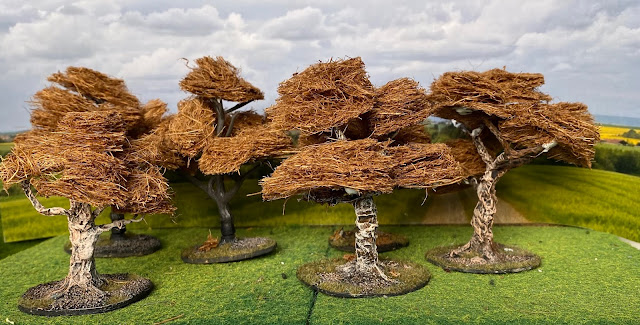 Then with the flock applied

And finally with a light spray of bright yellow.

Soon I had a wood, or at least a copse. 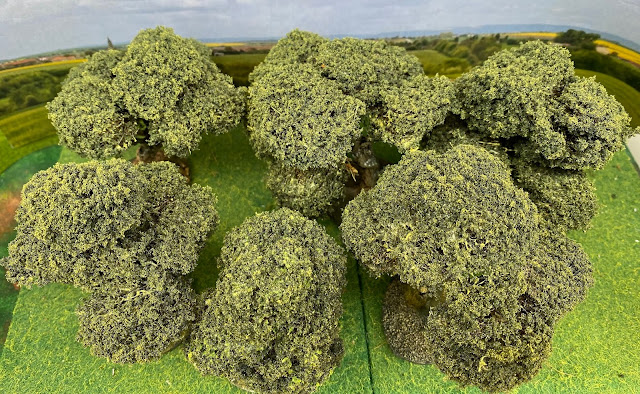 Finally, just in case regular readers were concerned that I was ignoring the ACW project, here is a standard sized Union cavalry regiment and a small Confederate one. 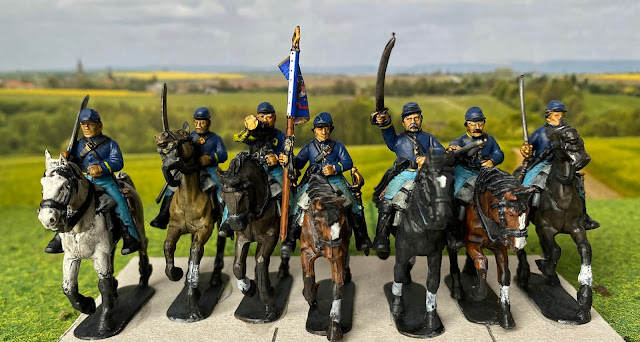 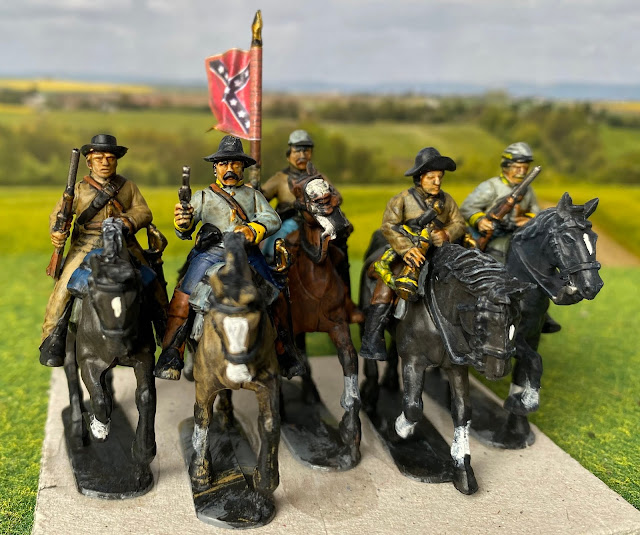 Now that the number of units in this project is stacking I think I need to organise a game to see if the vignette basing idea is going to work, before rebasing becomes too much if a chore.

This weekend I have a quick post to show this week’s effort - a regiment of Union infantry advancing at the right shoulder shift. 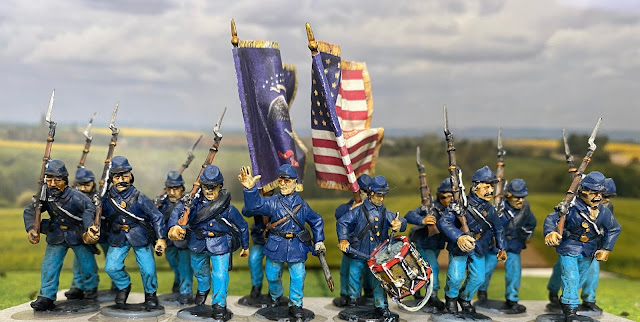 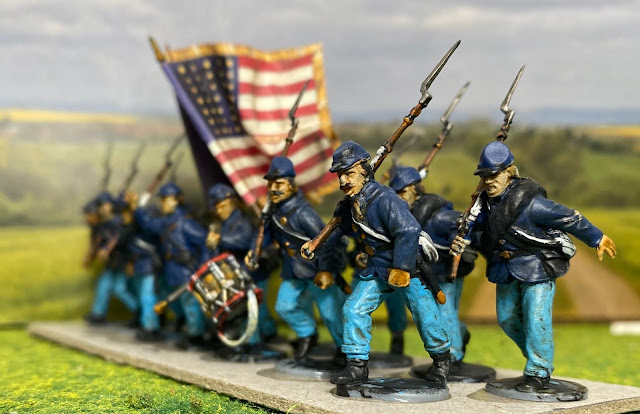 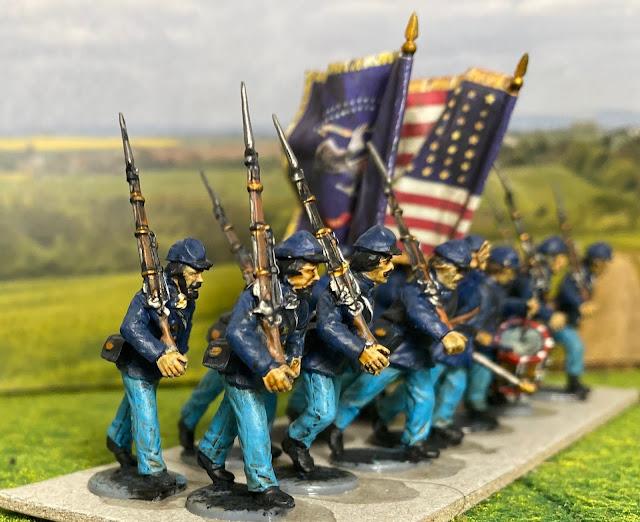 And surprise, surprise, more ACW regiments are to come!
Posted by Mark Strachan at 15:38 14 comments:

After a hiatus of nine months I restarted this Revolutionary French project in February, but due to a purchasing error I was short six grenadier figures (having order the advancing pose when I needed march attack to match the rest of the battalions).

The figures in the correct pose arrived over the weekend and made their way immediately to the painting table. I have to admit it was nice to have something different to American Civil War figures.

With these completed I have now based all three battalions of this Demi Brigade. 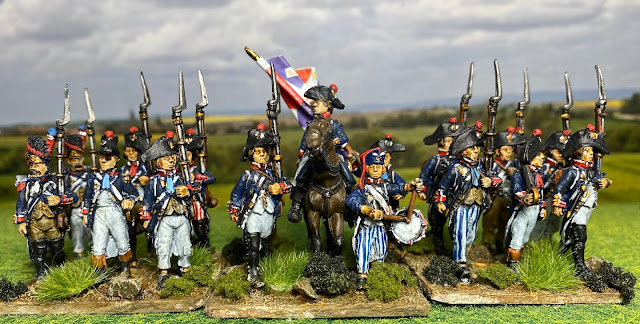 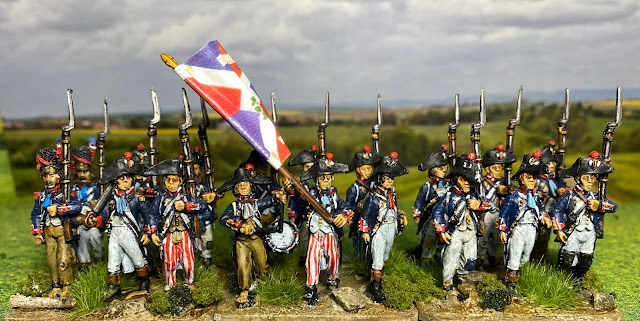 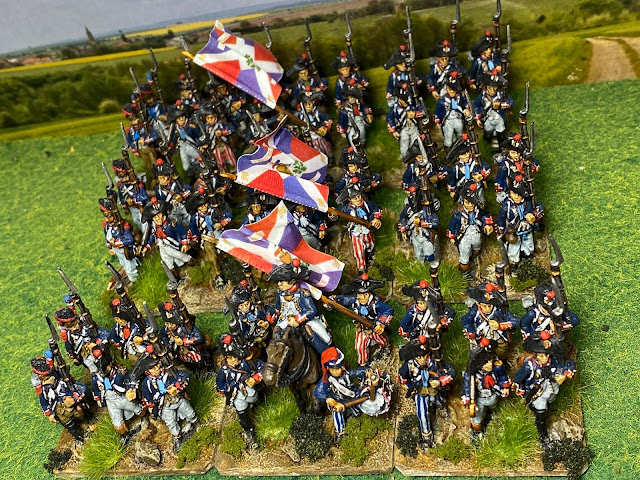 Also completed over the weekend was yet another ACW Union infantry regiment.

It has been a busy week. Last Wednesday was the first day back after my forced holiday and straight into redundancy discussions.

Saturday was ANZAC Day (our Remembrance Day) and with all the social distancing regulations all remembrance services were cancelled and instead we were asked to stand in silence at our gates at dawn. In out little street of maybe 20 houses I think every household participated. We stood there in silence at 06:00 on a cold morning as the sun rose while from the local Returned Serviceman’s Association hall, maybe a mile and a half away, the notes of the Last Post echoed eerily between the houses. It was a strange yet moving moment.

Between the redundancy talks and ANZAC day I have managed to push through three more ACW units.  First is a Confederate gun set. I really like these plastic gun sets. The variety of poses you can get by mixing and matching arms and bodies is superb and the resulting sets look so natural. 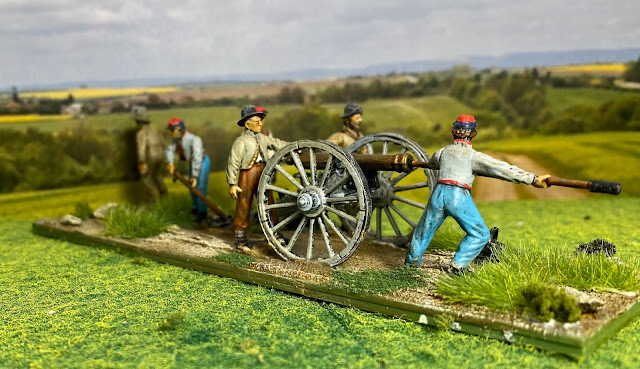 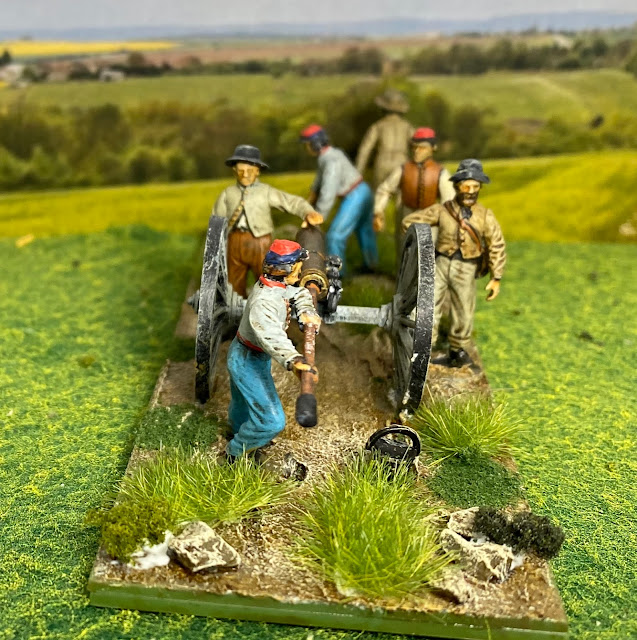 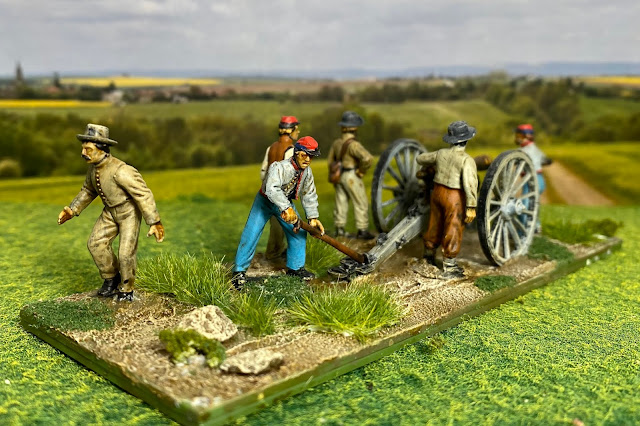 Next is a Confederate infantry unit

And finally a Union regiment from the original Perry plastic set. While this set is excellent, the later sets have just become better and better. I am a huge fan.

With nothing else in the lead/plastic pile to paint here are two more ACW units.

And a Union regiment...

And then there is a repeat of a previous post, well not quite a repeat, but these two Argentine battalions for the Great Paraguayan War had to be rebased because their cardboard bases curled up severely. They now stand anchored to some more sturdy plastic bases.

I really want the lockdown to end soon so that more stock (with a bit more variety) can be ordered.
Posted by Mark Strachan at 12:52 20 comments:

Following on from Turn 1 - Spring 1861 of our strategic campaign game of the American Civil War, turns 2 (Summer), 3 (Autumn or Fall) and 4 (Winter) have been completed. 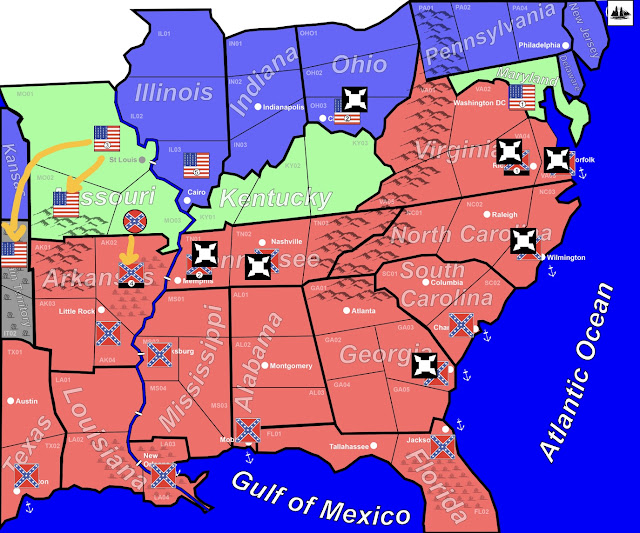 Reinforced, the Union players planned to strike at Norfolk and in the far west to gain control of Missouri and the Indian Territory. Sadly the army in the east failed to activate, but in the west Missouri was secured.

Similarly reinforced the Confederates retreated back into Arkansas and fortified their frontiers. Some of their ports were fortified, but crucial forces on the south coast failed to fortify.

Kentucky remained neutral and neither side was prepared to break it. 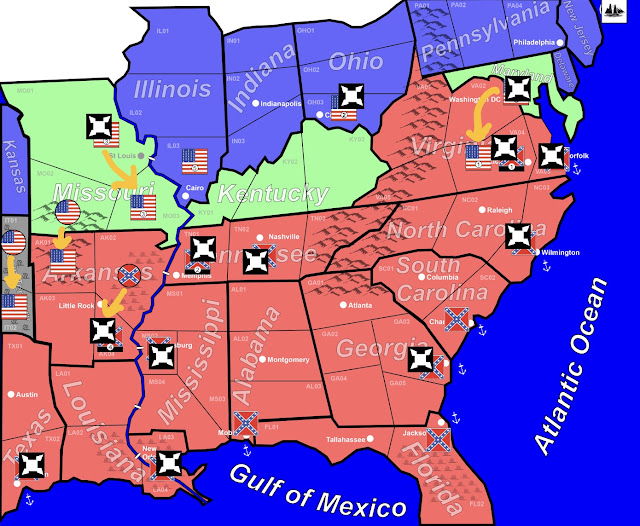 The Confederates continued fortify while west of the Mississippi they fell back onto Little Rock and dug in.

The Union continued to press forward in the west, occupying the Indian Territory and entering Arkansas. The forces on Cairo and Cincinnati decided to stay put, but in The east the Army of the Potomac attacked Richmond...and was repulsed. 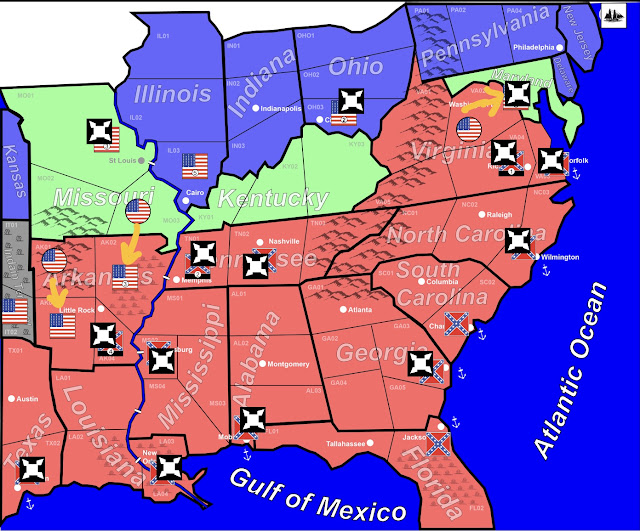 The Confederates fortified most of the Gulf Coast and held elsewhere.

The Union consolidated their position in the west, occupying most of Arkansas. The Army of the Potomac retreated to Washington.

As winter closed, the attrition calculations found that the Confederates had three more brigades than could be supported by their supply grid and had to eliminate them.

As we enter 1862, Kentucky sides with the Union and reinforcements are due to both sides. What the campaign will the year hold?