Wars of the Roses Game

Sunday’s game was a Wars of the Roses battle.

I set this game up along the lines of a game played several years ago where each player has a battle of four units: one of foot knights, one of halberdiers and two of archers. Each comes onto the table at at different location, without having declared an allegiance. Then Henry and Richard arrive on the table, each with a unit of mounted knights and one of light cavalry. The other players then have the option of declaring allegiance to one of the rivals or remaining neutral.

Also available are seven mercenary cards (placed face down) representing five mercenary units. Two of those cards are blank. Whenever a player comes within 200mm of a card it is turned over to reveal whether the unit is crossbowmen, handgunners or pikemen and 1xD6 is rolled and with a score of 4+ the unit will join the player and if failed the player can attempt again in another turn or another player can approach the unit and attempt to take control of the unit.

The game was originally set up for six players, so when we suddenly had ten available, thee was a bit of a scramble to get enough figures together.

So how did the game run? Well as soon as Richard and Henry raised their standards two battles joined each of them and four battles remained neutral. Meanwhile everyone raced for the mercenaries.

Within a couple of turns another two battles had joined Richard, two remained neutral and four out of the five mercenaries were snapped up by Richard and his battles.

It took a bit of time to develop but the serious action developed on Richard’s right between one of his battles and two of Henry’s. One of the neutrals stayed in a fixed position on the Lancaster left while the other moved around their right, intent unknown.

Then one of Richard’s battles decided to attack the neutral battle on Henry’s left and has some initial success. But his opponent rallied and struck back with a force that sent the Yorkists reeling and despatched them from the field. In fact things were seriously in the balance here as Richard faced capture. Only a lucky activation result got him clear of danger. 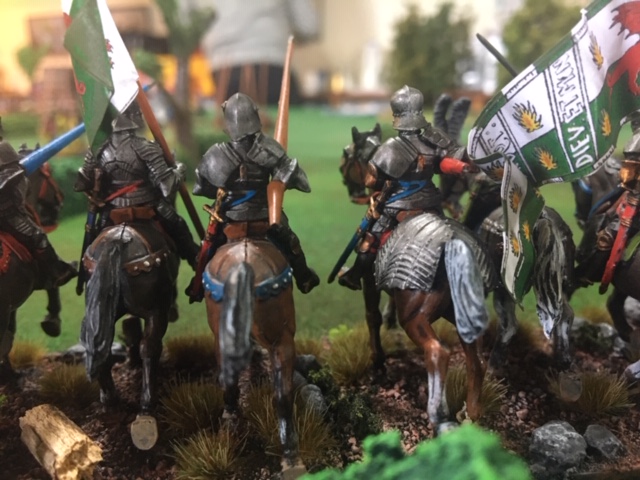 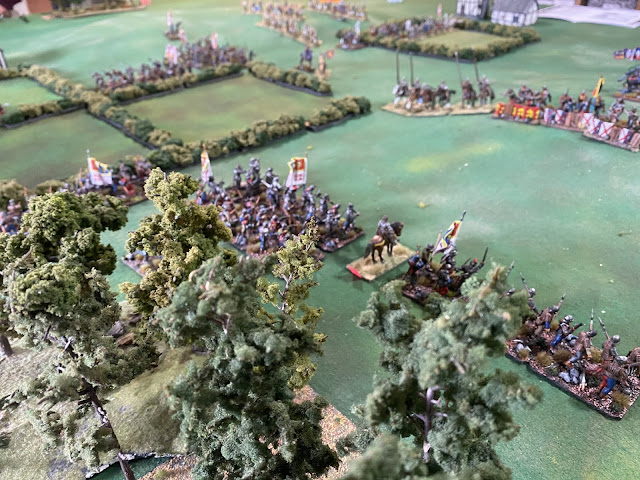 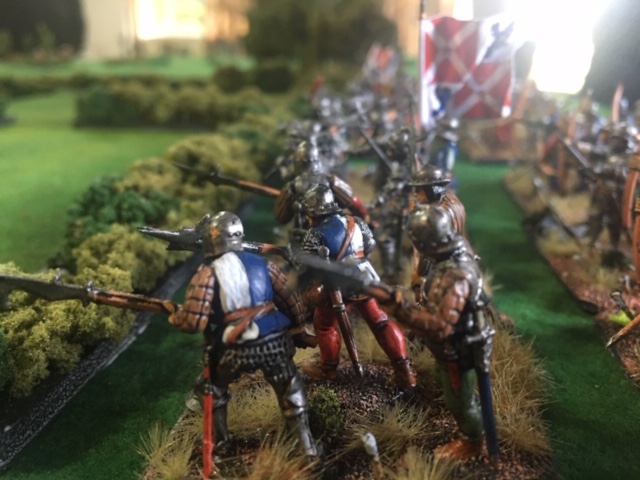 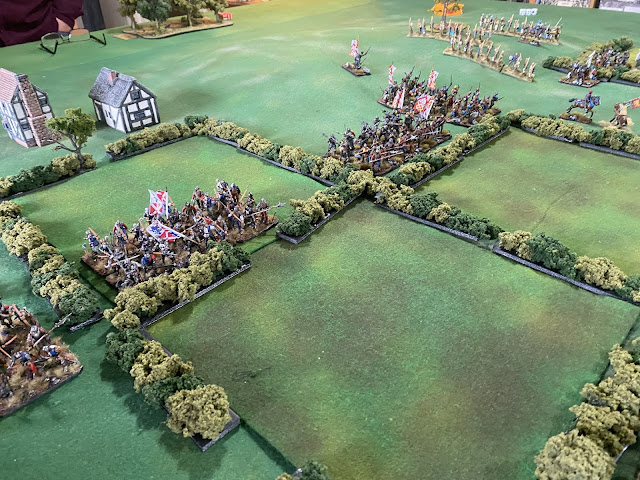 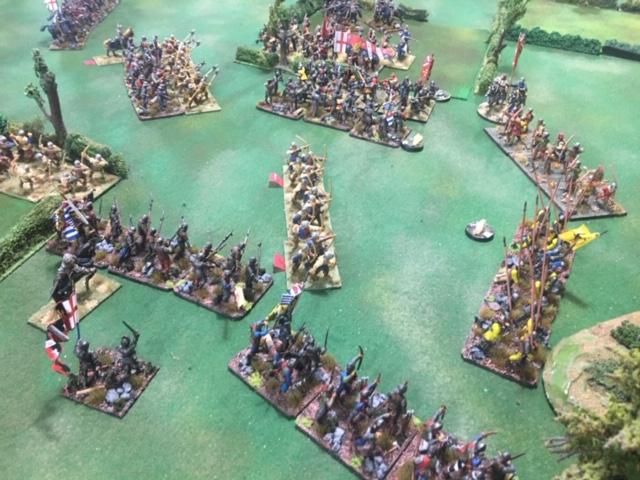 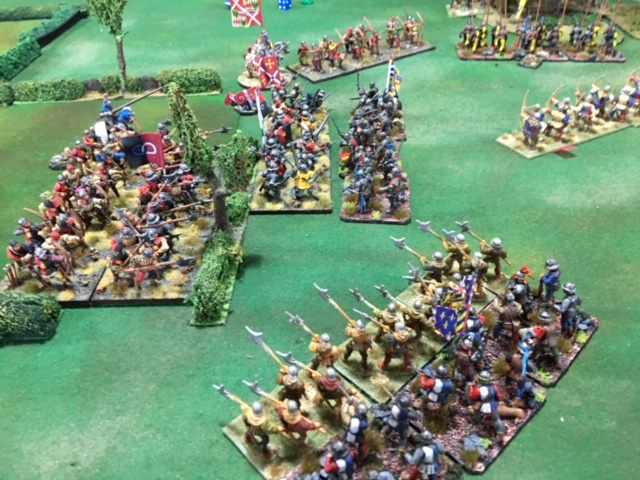 Meanwhile the battle on the York left continued as another of their battles joined the fray until suddenly two of Henry’s battles gave way.

Although one of the neutrals had been brought into the battle on Henry’s side by default, and did remarkably well, no one knew what the remaining neutral was going to do and Henry decided that victory could come another day…if he could keep his head.

Email ThisBlogThis!Share to TwitterShare to FacebookShare to Pinterest
Labels: Wargames, Wars of the Roses

Sunday’s regular game was a large Napoleonic game. It was set in 1813 with an Austro-Prussian force facing off against  Franco-Bavarian force in the broad open fields southeast of Leipzig. The French have been ordered to push through and the Allied troops ordered not only to stop them but to push them back on Leipzig.

There wasn’t much subtlety to the set up with both sides setting up simultaneously on opposite sides of the table and it was always going to be a slogging match. The Franco-Austrians deployed with a French infantry division on the right, flanked on the right by a cuirassier division and on the left by the dragoon division. To the left of the dragoons was the larger French infantry division, then the second cuirassier  division, the light cavalry division, while the Bavarians closed out the line.

On the opposite side the Prussians stood opposite the Bavarians while the centre and left of the Allied line was held by the Austrians.

Battle commenced around 10:30AM an ended around 3:30PM and raged all along the line before we French were compelled to turn back towards Leipzig. Here are a few scenes from the battle (I didn’t take  huge number of shots if the game, but I did note that our Austrian opponent who presents the Bydand blog was taking quite a few and doubtless will present a view from his side of the table). So in a rather random order here is my completely unbiased view of the affair.


I do realise that I haven’t posted much of late. This shouldn’t be taken as a slackening off my hobby efforts, although global supply chain issues have delayed some deliveries. To the contrary I have been very busy preparing terrain and armies for a game later in the year. In fact this project has seen 173 foot and 17 mounted figures painted and 43 pieces of terrain built to date with more than double that number of figures (and a dozen or so terrain pieces) to be completed. Because the era and the armies of the game will remain undeclared until the evening before play, I have not presented anything to do with that project on these pages in case the various members of the group put two and two together and come up with the right answer. Be assured that in the fullness of time all will be revealed.