All quiet on the painting front

I haven't painted a thing since I finished the Crimean Highlanders. Instead I have been working on a couple of scratch built 4.7inch guns for the Russo-Japanese armies and reorganising all of the armies from their shabby cardboard boxes in to new plastic trays, while waiting for the arrival of some Russo-Japanese field guns (and given the past record of this supplier that may be four or five weeks away).
What is interesting about the reorganising is the realisation of just how many figures I have. By far the largest collection is the American Civil War, but a very close second is the Austro-Prussian collection, of which I have Austrian, Prussian and Italian armies. These armies haven't seen the light of day since October 2012, so opening the boxes was like being reacquainted with old friends.
I also dug out images from those games and have included them here.
This first batch, from 2008, was from an Austro-Italian game set in Venetia. 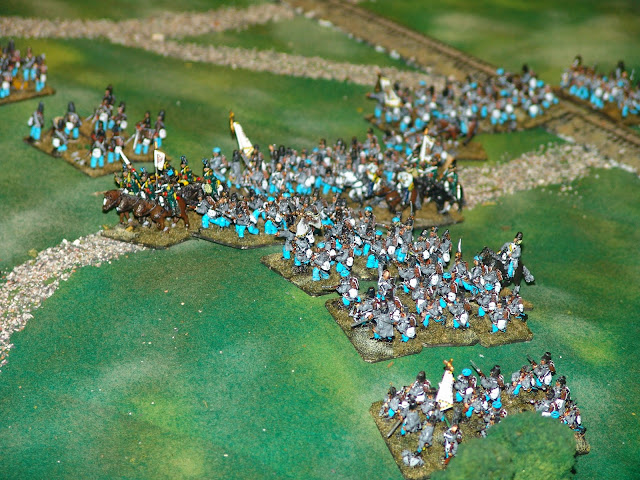 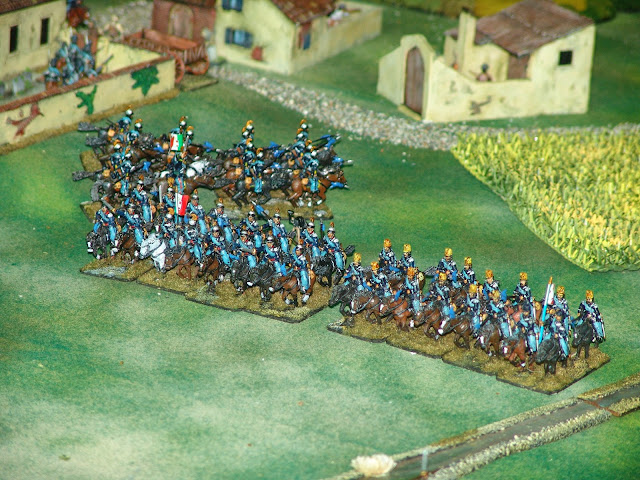 Italian Cavalry, light cavalry on the right, heavy on the left and lancers to the rear 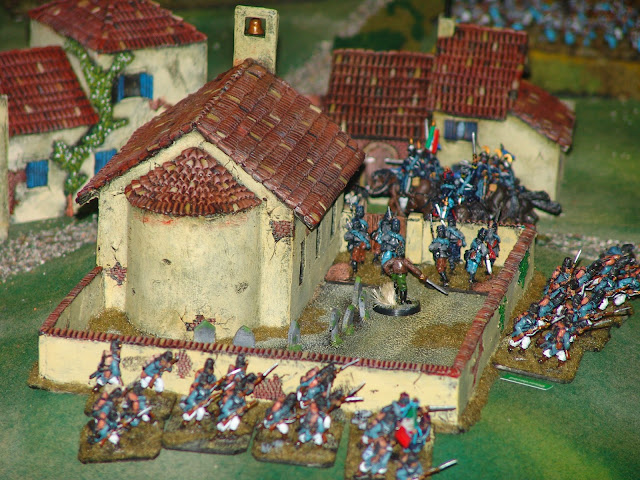 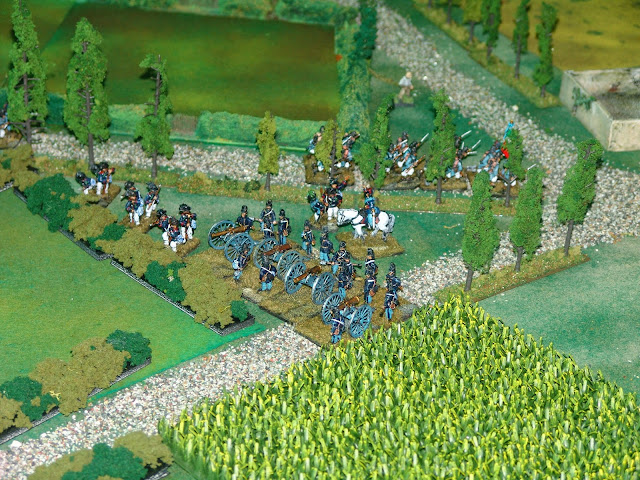 An Italian battery supported by a battalion of Bersagleri 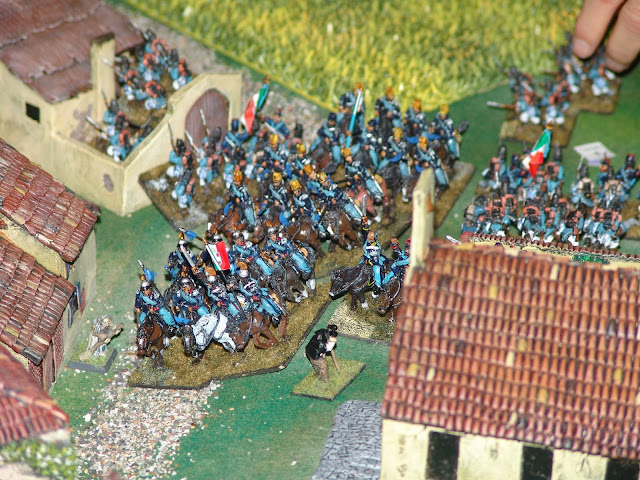 Italian infantry and cavalry pass through the village
This next batch, from 2012, with the Austrians facing thre Prussians, are from a game set in Bohemia. 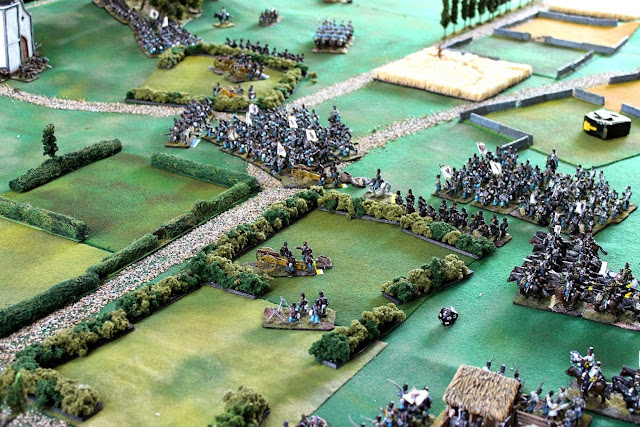 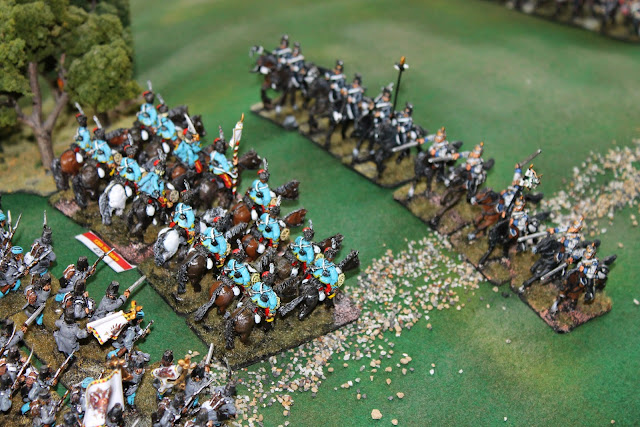 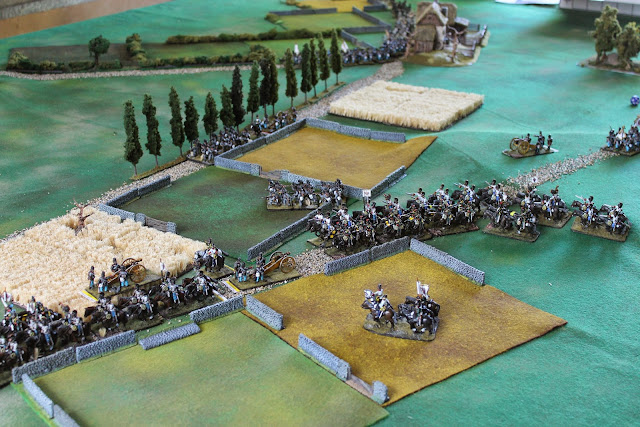 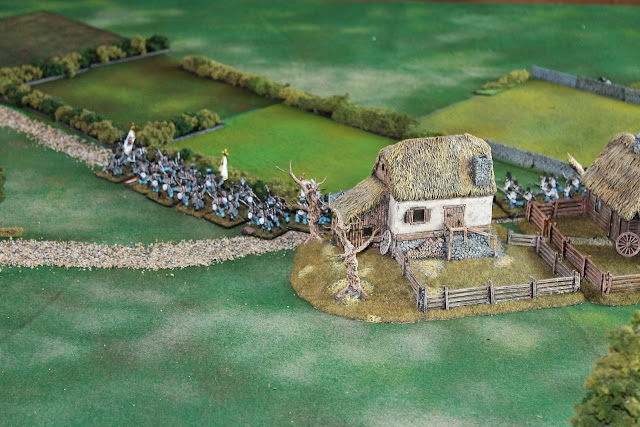 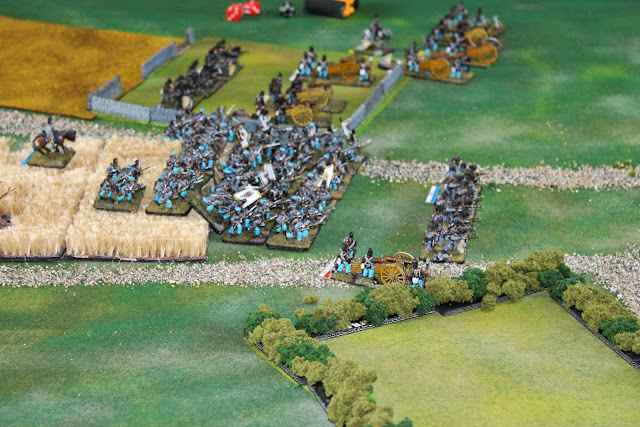 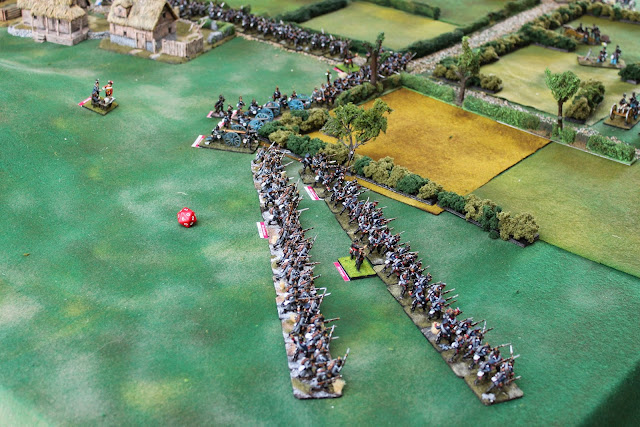 The Prussians counter attack
Posted by Mark Strachan at 18:39 2 comments:

Well the last batch of figures for the British army in the Crimea has been painted. This includes the Highland Brigade (the 42nd, 79th and 93rd Regiments), two guns and their crew, and the divisional command base - the Duke of Cambridge and a highland colonel.
I wouldn't say they were my best painting, I struggled with the socks and the checked effect on the bonnets, but based up and formed in lines they look mighty impressive. 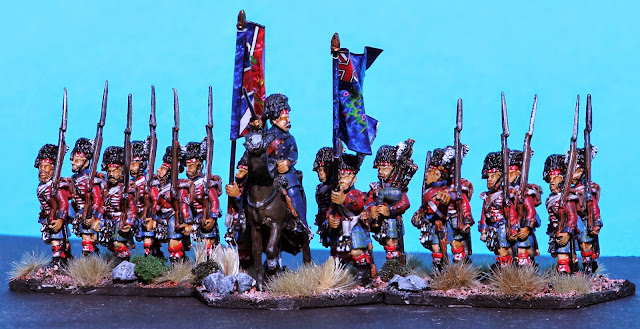 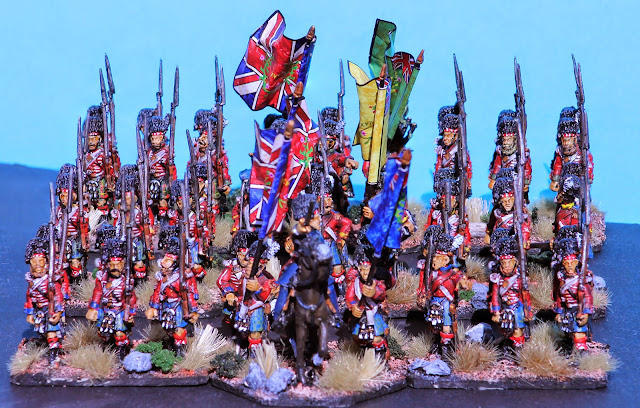 The Highland Brigade in column of battalions (front to back the 42nd, the 93rd and the 79th) 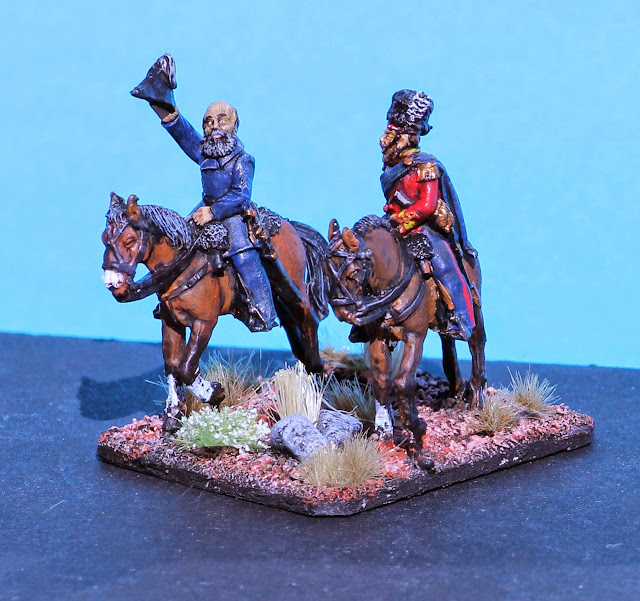 The Duke of Cambridge and his ADC 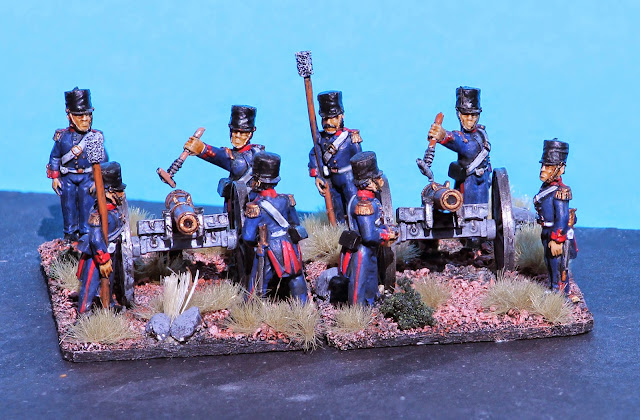 The Artillery
Together with the Brigade of Guards, the Highland Brigade make up the First Division from the Battle of the Alma.
The Crimean army will go on hold for a month or two while I build up some more Russo-Japanese artillery. I need another twelve Japanese guns (some of which will need to be scratch built) and another four Russian. I also want to add some cavalry, mounted and dismounted, to both of those armies.
Posted by Mark Strachan at 13:47 No comments:

In 1986, on my first visit to the UK and Europe, I spent a week at Peter Gilder's Wargames Holiday Centre. Just the other day I was cleaning up some old photos and I found the shots I had taken during that week 29 years ago. All of the pictures were seriously under exposed, but I scanned them and did a bit of PhotoShop work to try an clean them up. They brought back a whole batch of memories about that week and inspired this post.
Memories are a little hazy now, but I remember arriving in Scarborough on the afternoon of the Sunday and meeting up with the other attendees at dinner. I can recall most of the people there. There was one older chap, called Bob, a young chap from Bradford, three blokes from London and two others. After dinner Peter Gilder met us and we all drove in the Centre's minibus to the holiday centre, where for the  first time I saw the setup that I had seen many times in the Miniature Wargames magazine.
The games room was in a long rectangular building with two tables 27 feet long by 6 feet wide, and separated by a gap of 3 feet. Against one wall was another table, 3 feet wide, that could be used as troop assembly area, or for off table manoeuvring. After getting to know our host and the gaming facilities we were given the keys to the minibus and went back to the hotel in Scarborough. That minibus  became our self-drive transport for the week.
There were four games played. The first was a Napoleonic, followed by (not necessarily in order) Pony Wars and the Italian Wars. The last two days were a refight of Austerlitz, played across two tables and involving some 5,000 figures.
The Italian Wars game 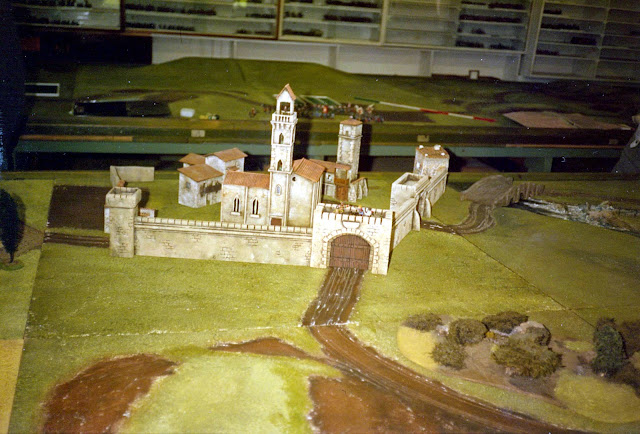 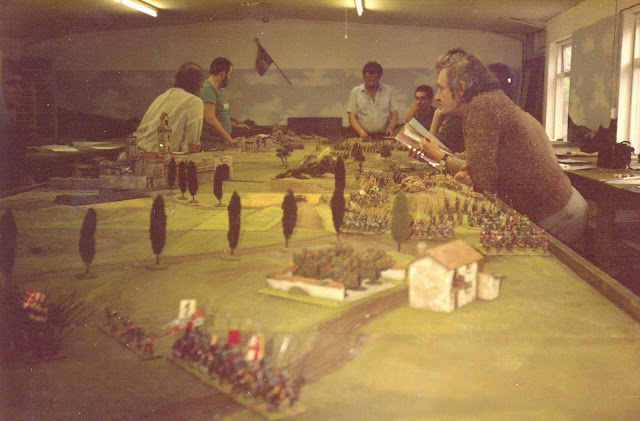 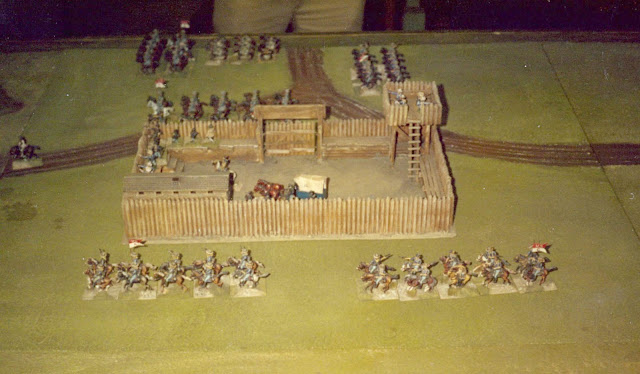 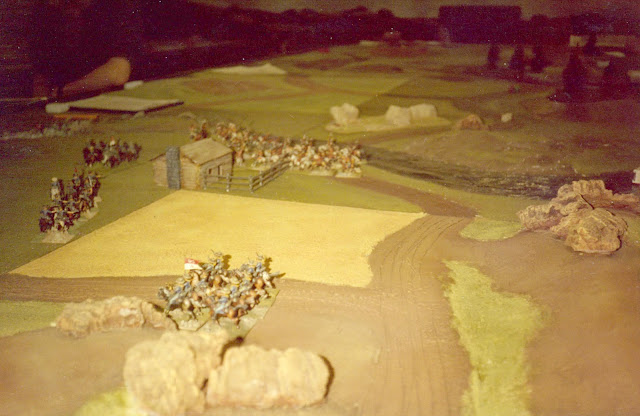 The Napoleonic Games (the final three images are the Austerlitz game) 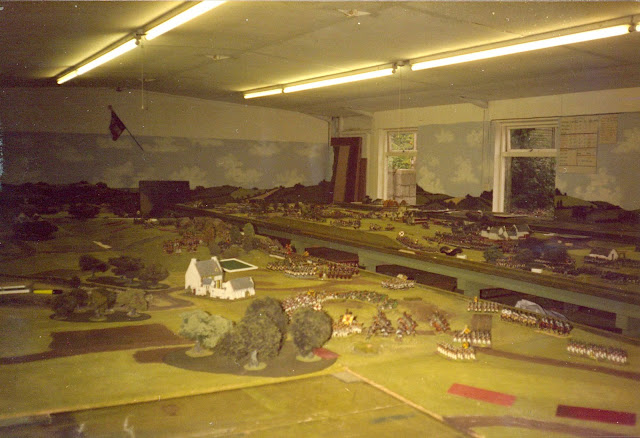 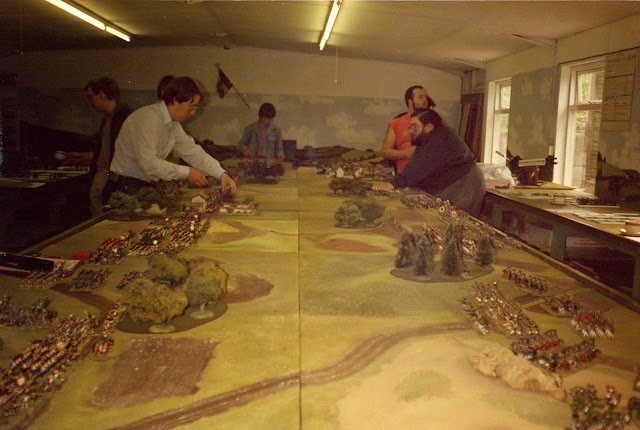 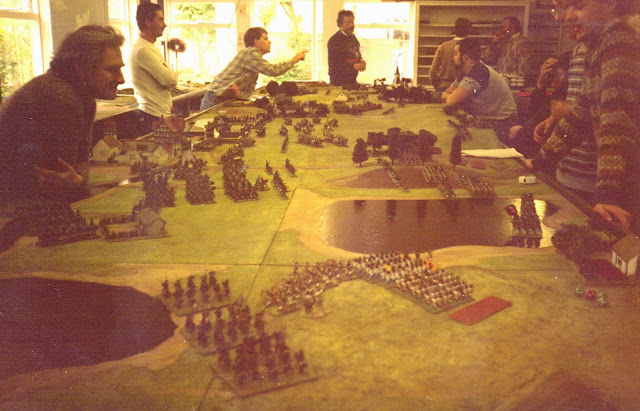 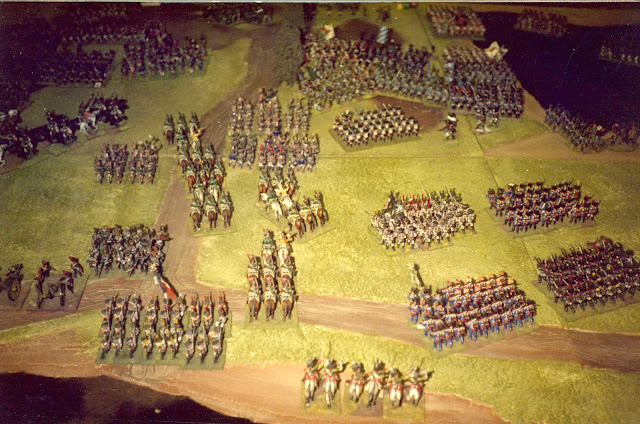 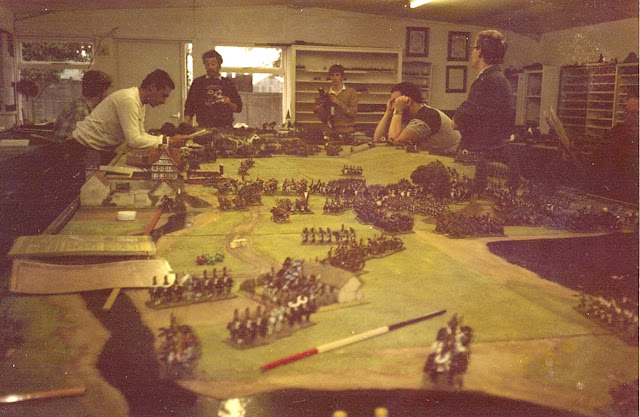 Email ThisBlogThis!Share to TwitterShare to FacebookShare to Pinterest
Labels: Wargames

No time for photographs at the moment. I am too busy painting.

My order for Crimean War British arrived from Great War Miniatures on September 22 and I have been working on them intensely ever since.

I had ordered three battalions (the whole of the Highland Brigade), together with two guns and two mounted figures - Sir Colin Campbell and a highland colonel.

I have finished the mounted officers and the artillery and have done about two thirds of the infantry – the 42nd Black Watch and the 93rd Argyle and Sutherland Regiments. They are starting to look great, but those cursed cross-hatched socks have been driving me insane! I have never been much good at fine straight lines so they are a struggle for me – some are better than others I hope that when they are all based up, my average (or less than average in some cases) work will be concealed by the landscaping on the base.

This purchase completes the 1st Division, that comprises the Guards Brigade, the Highland Brigade and two batteries.

We have a long weekend away next week so I don’t know if I will get any time to get any photos done before then, but I shall try.

I am also working on tidying up some Foundry Franco-Prussian French that someone else had half painted. These are being worked on in the moments when the cross-hatching drives me to distraction.

Posted by Mark Strachan at 08:53 No comments: