I am doing four Virginia regiments for my AWI Americans and these are the last two, the 1st and 3rd Regiments.

Both regiments had a relatively similarly service life. The 1st was authorised in August 1775 as Virginia State troops and was formed of eight companies in October 1775 at Williamsburg. The Third was organised in February 1776 at Alexandria and Dumfries in ten companies raised from Prince William, Fauquier, Stafford, Louisa, Fairfax, King George, Loudoun, and Culpeper Counties. Both were assigned initially to the Southern Department and transferred to the Main Army in mid-1776. 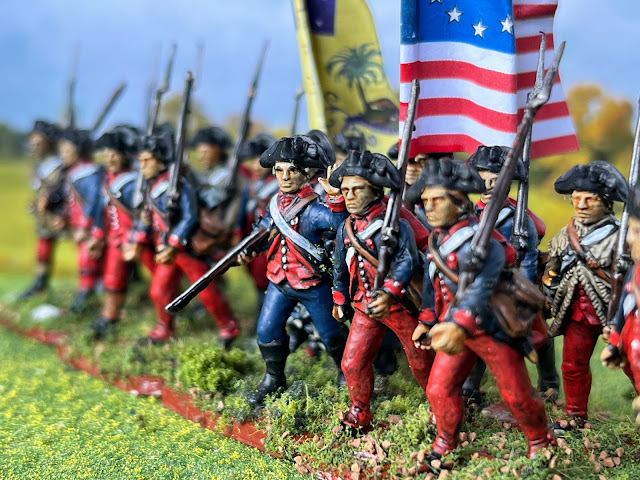 In 1777, after the rigours of campaign, both regiments were consolidated - the 1st with the 9th Regiment and the 3rd with the 5th, but kept their original titles. The 1st was transferred back to the Southern Department in December 1778 and the 3rd followed it in 1779. 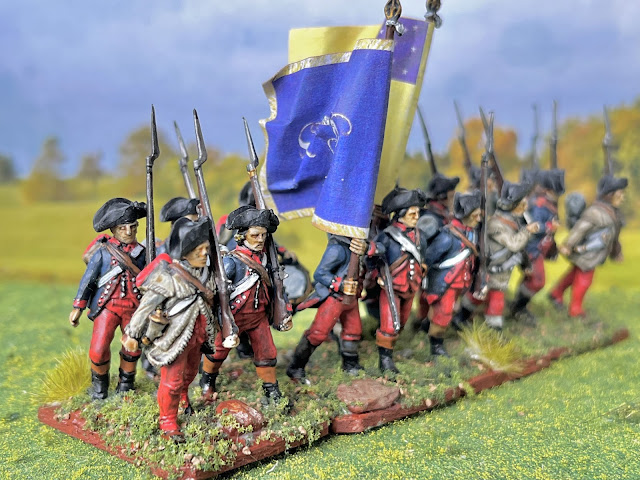 Both regiments fought at Chesapeake Bay, the battles around New York, then though Northern New Jersey, Trenton, Princeton, Monmouth, Brandywine, Germantown and the defence of Philadelphia. Both surrendered at Charleston in May 1780 and were formally disbanded in 1783.

And so my whole Virginia contingent takes to the parade ground. 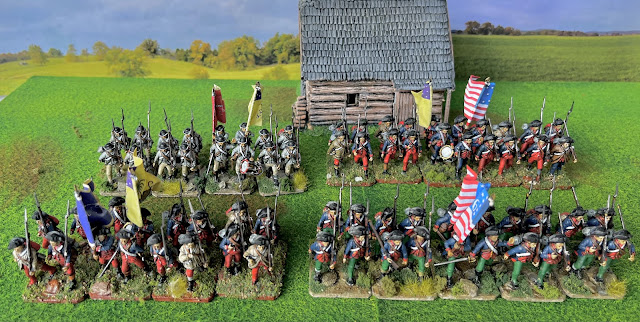 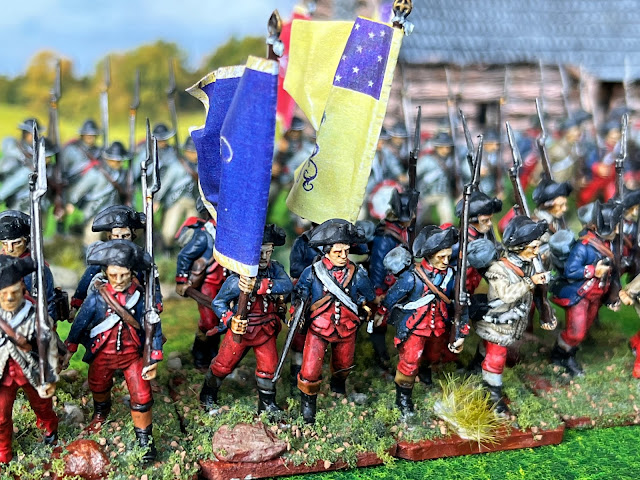 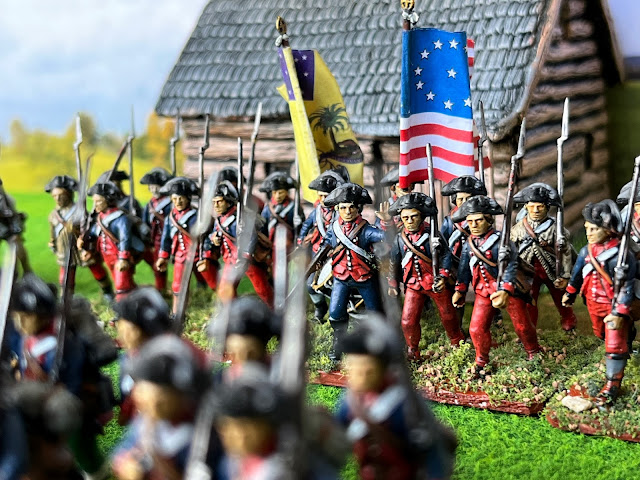 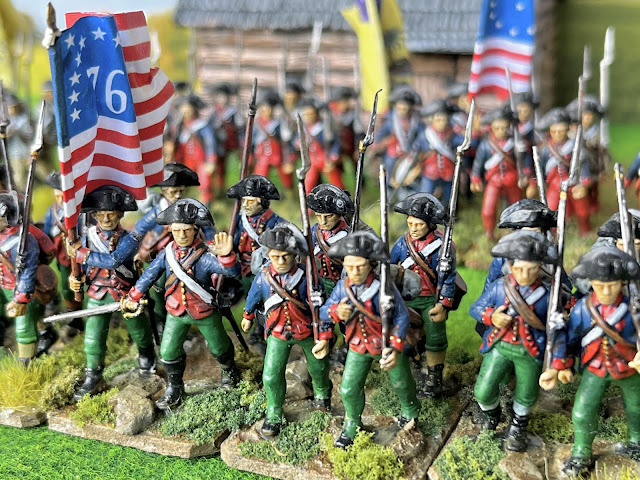 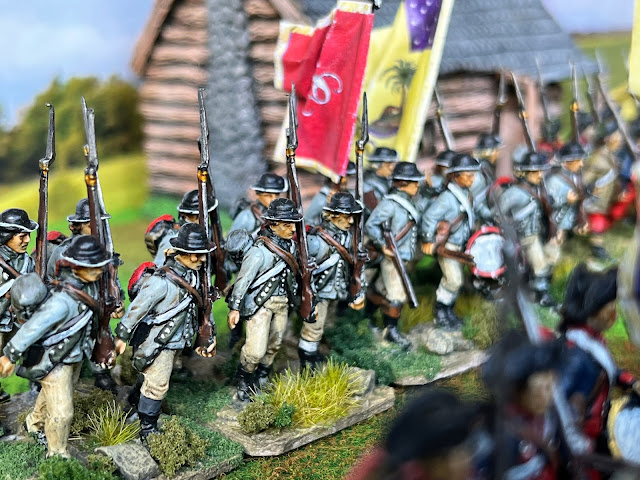 Next in this collection will be a couple of New Hampshire regiments.
Posted by Mark Strachan at 11:34 16 comments: 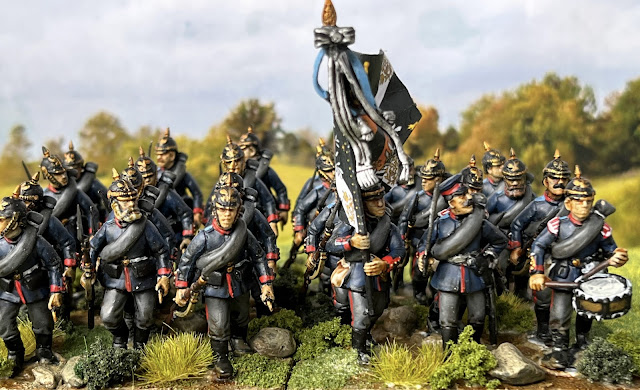 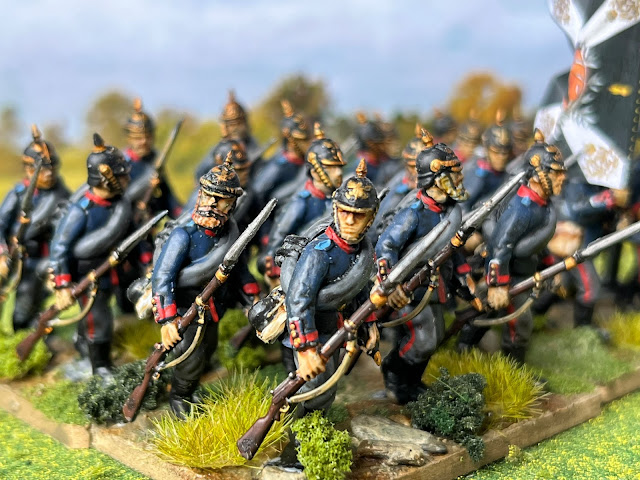 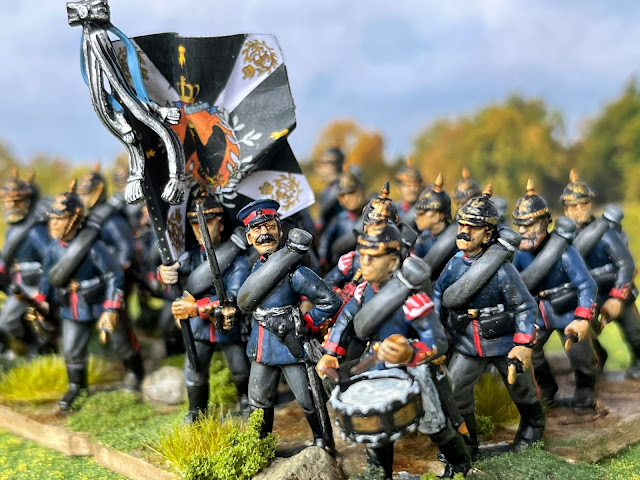 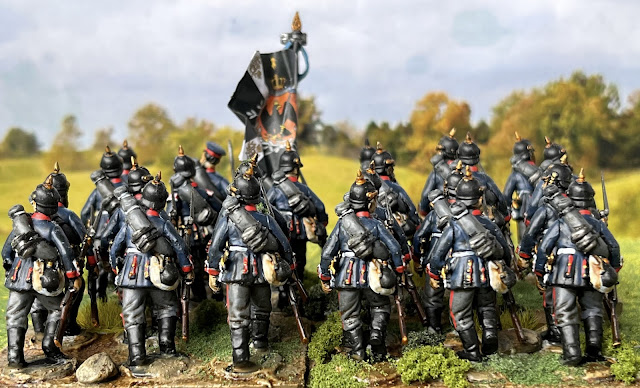 Only four battalions left in this project now.
Posted by Mark Strachan at 21:04 14 comments:

A Spot of Napoleonic Gaming and Another New Unit 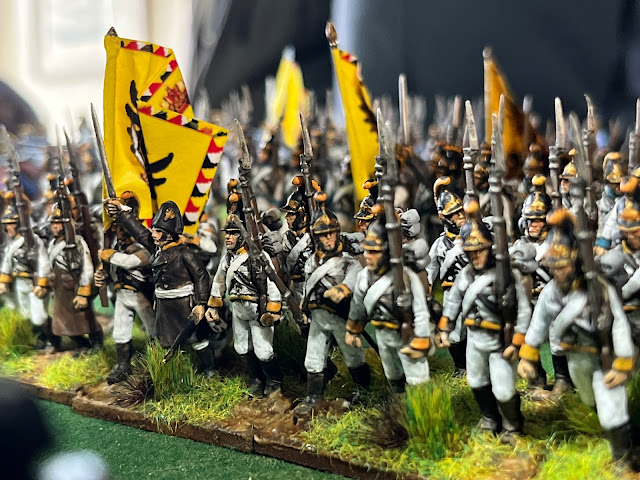 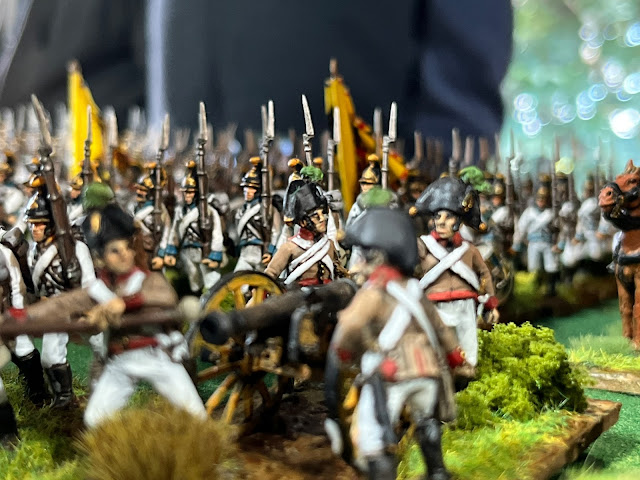 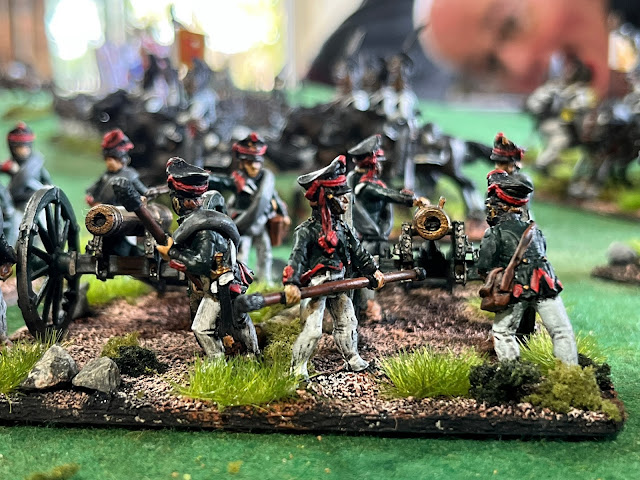 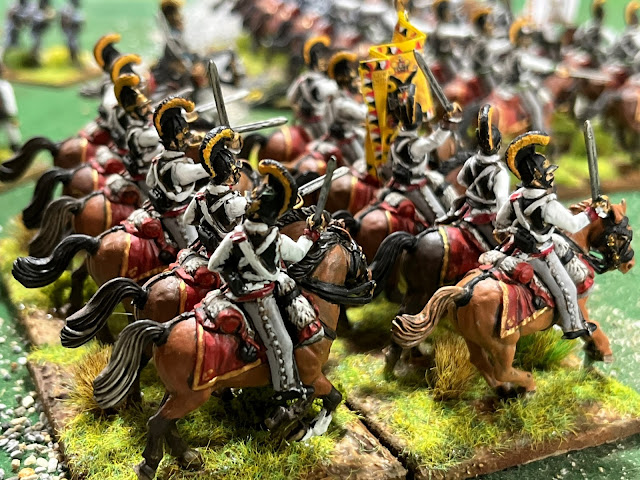 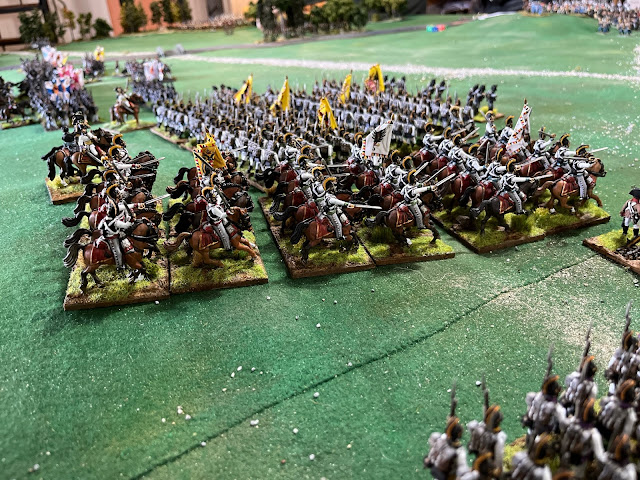 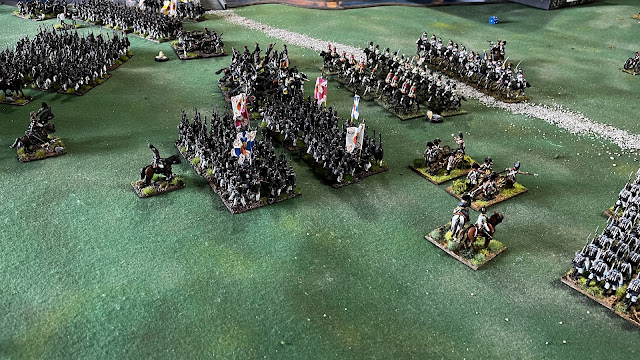 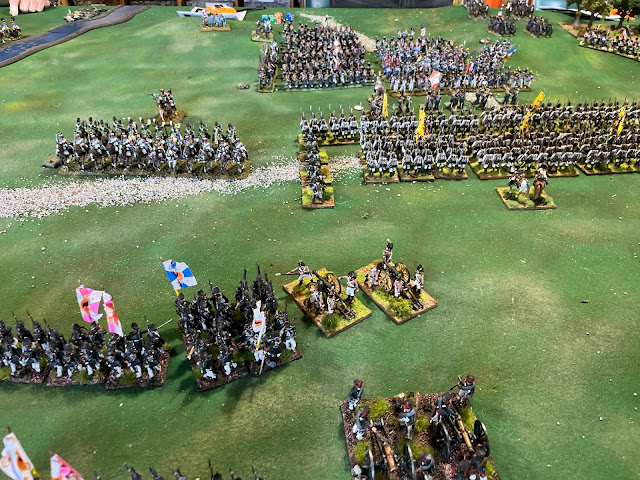 In the end the battle was ruled a draw, favouring the Franco-Bavarians.
I am sure that Keith will have a view from his side of the table…at the other end of the field from me.
Posted by Mark Strachan at 21:52 14 comments:

Organised in the summer of 1775 at Charleston to consist of ten companies from eastern South Carolina it was adopted into the Continenal Army in November. It served the majority of the war in the Southern Department (that part of the colonies south of the Virginia/Maryland border). It fought at Charleston in 1775 and 1776, in Florida in 1778 and at Savannah and Charleston in 1780. In addition to that one company served in the Caribbean in 1778. 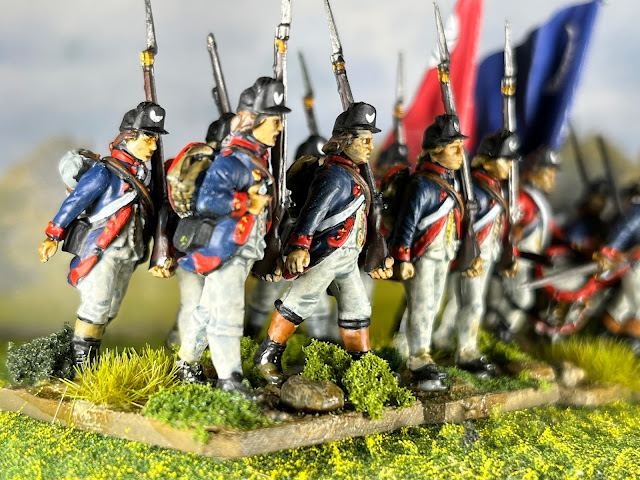 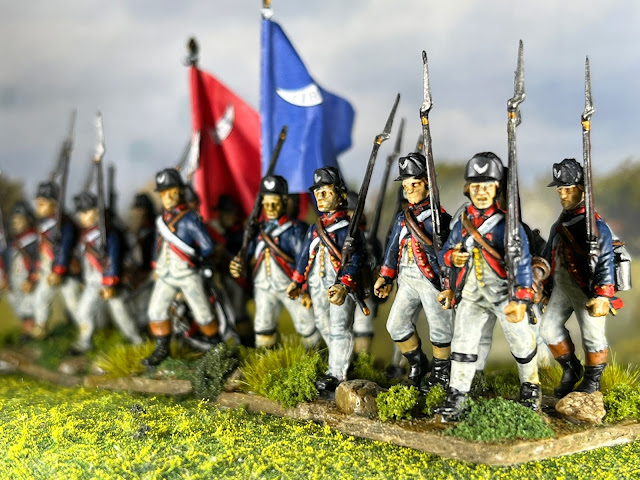 The regiment was consolidated with the 5th South Carolina Regiment in early 1780, but retained the 1st South Carolina title. It surrendered with the rest of the southern army at Charleston in May 1780 by the British Army. Reformed in December 1782 it was disbanded in November 1783. 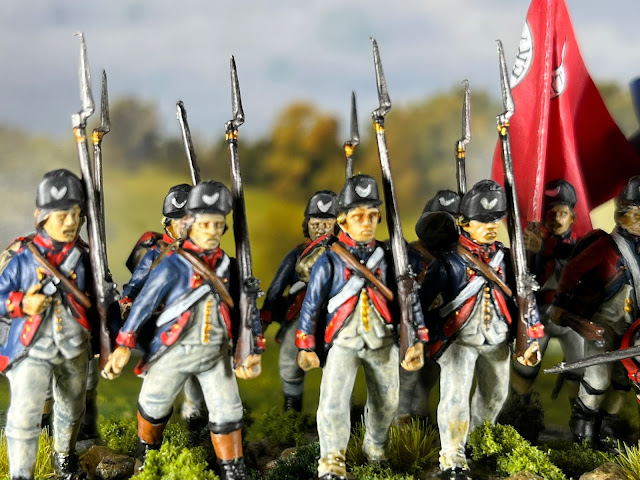 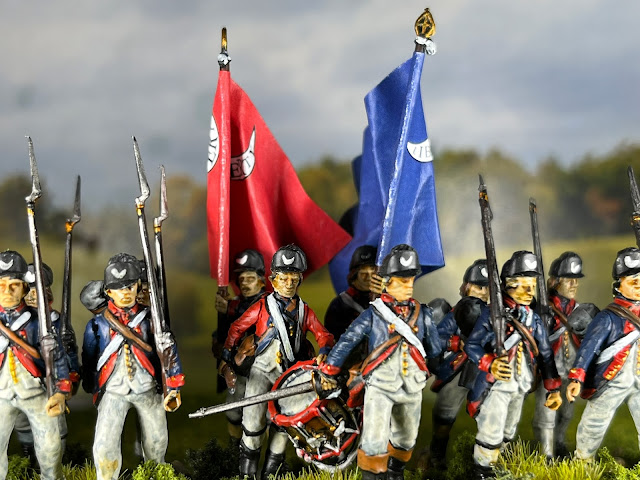 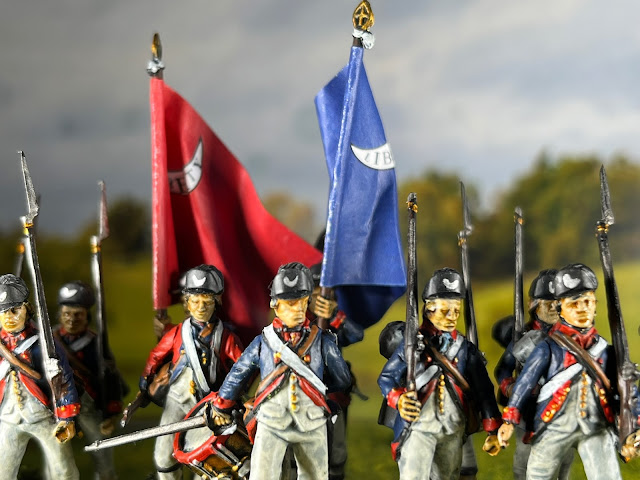 I am really enjoying working on these figures. I particularly like the variety the casual poses provide where some figures don’t have a bayonets fixed, or some are marching with muskets over the right shoulder instead of the left and some, not in this unit, have their muskets inverted.

When the Kingdom of Hanover was annexed by Prussia at the end of the Austro-Prussian War, its army was absorbed into the Prussian Army, forming four new regiments:

This week’s unit represents First Battalion, 2nd Hanoverian Infantry Regiment that served in VII  Corps in 1870. In its first action in that war, at Spicheren on 6 August, the regiment was heavily engaged on the right of the battle line in the Stiring Copse and the Fusilier battalion (supported by a company of the 2nd Battalion) stormed the homesteads at the foot of the Spicheren Heights. In these hard fought actions  the regiment suffered losses of 628 (131 killed, 438 wounded and 59 missing), around 20% of their effective strength. The regiment was lightly engaged in the actions of Borny and Gravelotte that followed. 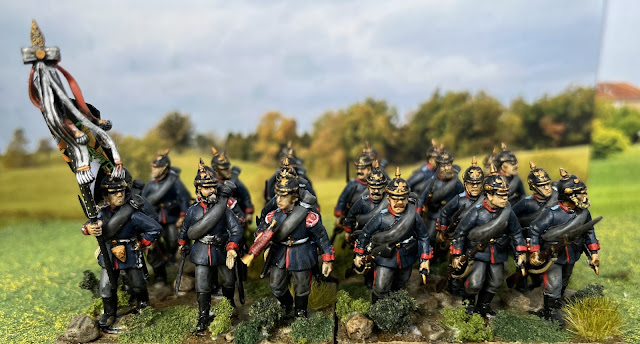 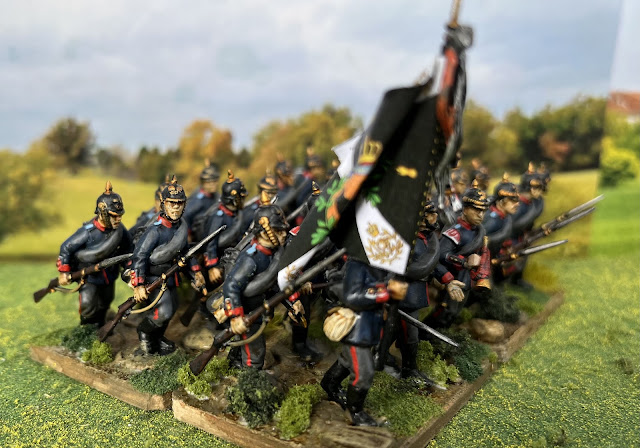 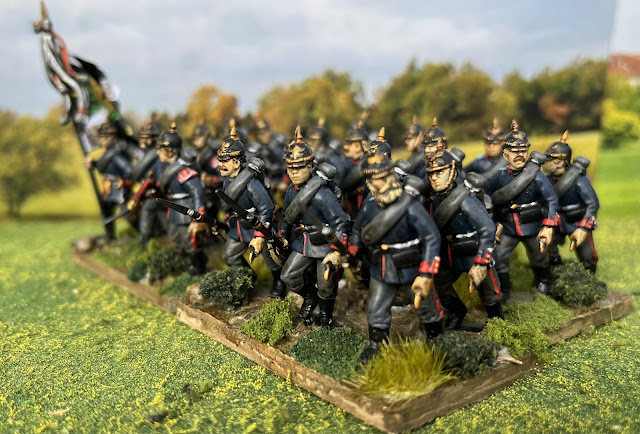 I have also based up the Russian generals presented a few days ago. 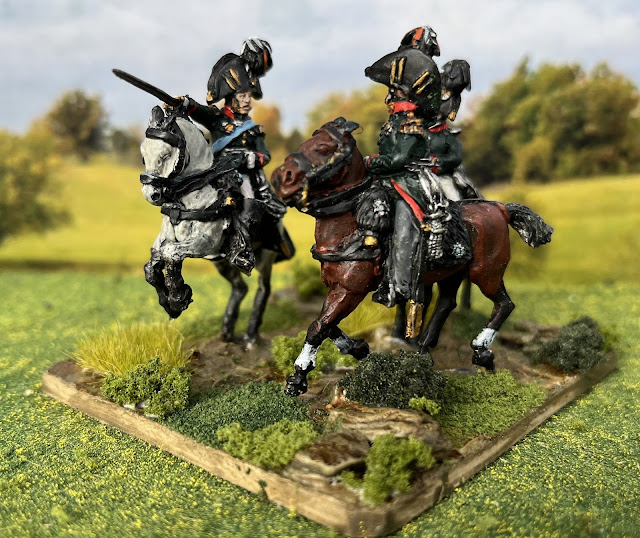 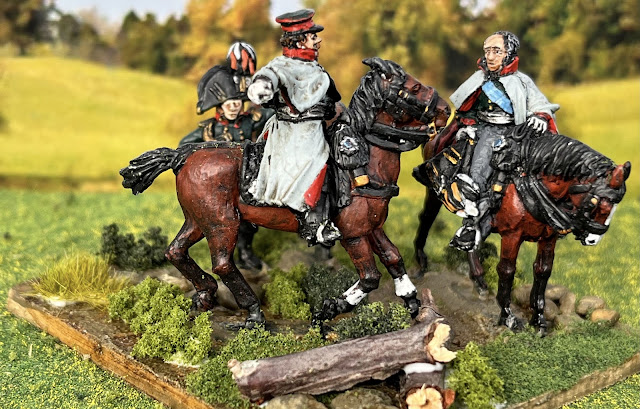 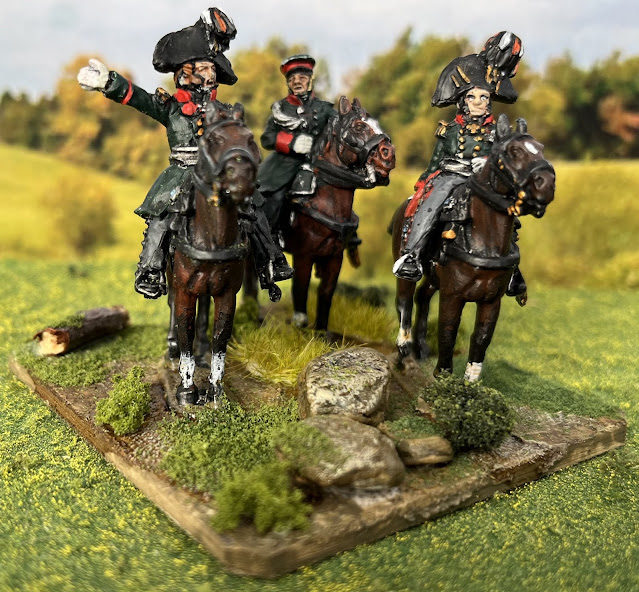