Things have been slow on the painting front in the last few weeks.

I haven’t quite run out of things to paint, because there was a number of odd items lying about in the lead pile (like some Franco-Prussian artillery and some left over 1866 Piedmontese Bersagleri that have been repurposed for the Crimea).

When cleaning up in the study I found these old Foundry WSS command figures that have been painted as a brigade command group. 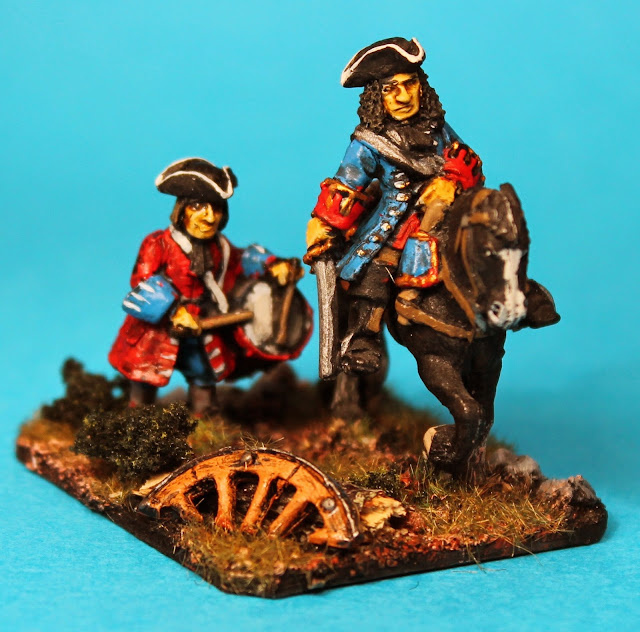 I also made a whole stack of markers for use in future games, but otherwise things haven’t quite worked out the way they were meant to.

Two weeks ago I needed to get some unexpected dental work done. By some miracle the cost of that work came in at half the quoted value, but I didn’t get to bask in the glory of that small win for long, because that same evening the washing machine died, and with all my hopes of being able to order the next batch of WSS figures.

To make matters worse the order I placed for Russo-Japanese War figures went missing in the post. A replacement parcel was sent, but I lost a couple of weeks as a results.

Then last Thursday the RJW parcel arrived. It contained enough Russian infantry to finish off another infantry regiment, plus a few more figures for eventual conversion to Frontier Guards and finally this fantastic little set from the Tsuba Miniatures Japanese ammunition train set. 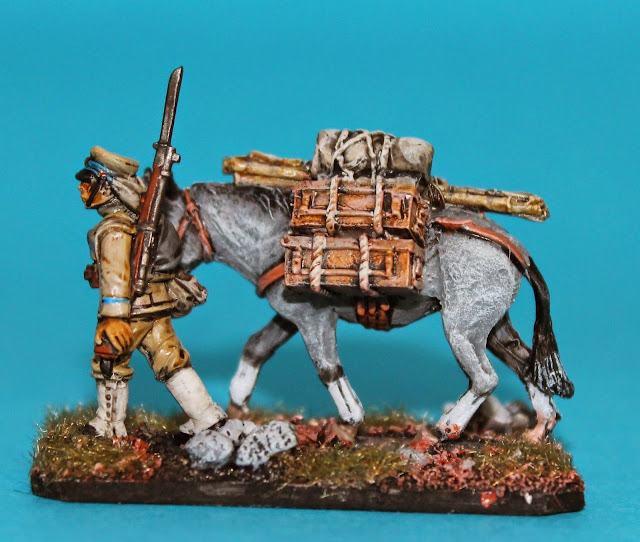 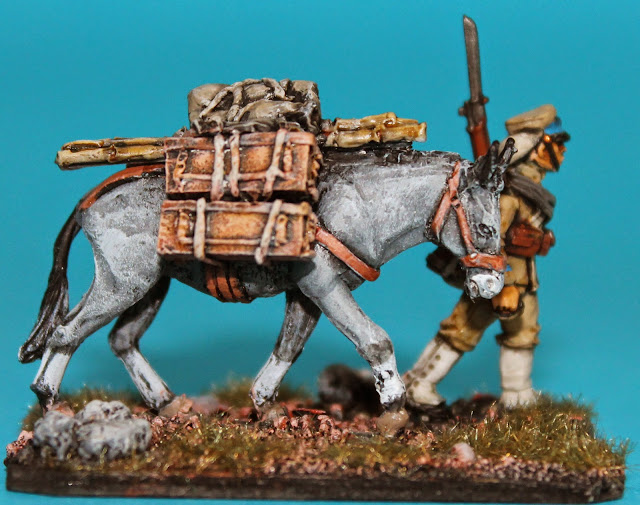 Posted by Mark Strachan at 17:00 No comments:

For the last month I have been working on a project that has seemn me deviate from my usual periods of mid-nineteenth century (that I have allowed to stretch forward as far as early WWI). I have been working on a Bavarian army for the War of Spanish Succession. I am no stranger to this period since I collected, and subsequently sold, a sizeable WSS Bavarian army back in the late-1980s. I often regretted selling that army.
The rebuild was prompted by our decision to play a WSS game at our annual wargames weekend later this year. I decided to contribute some Bavarians. My original intention was to build half a dozen battalions and a couple of regiments of horse, but when I saw an order of battle for Blenhiem and noted that the entire Bavarian force comprised of only nine battalions and the equivalent of five regiments of horse, all plans for a token force went out the window - this is such a predictable result for my plans for wargames projects. I figured that a force of this size was doable, and by using the plastic figures from Wargames Factory, was doable at a reasonable cost. So I ordered four boxes of infantry and in just under a month had five battalions of 28 figures each completed.

The First Battlion of Bavarians - Regiment Maffei
Today the Bavarians saw action on the table for the first time when four of us played a War of Spanish  Succession game. This was a significant sized game with nine battalions of Anglo-Dutch infantry and seven regiments of cavalry, against a Franco-Bavarian force of fifteen battalions and seven regiments of cavalry. Both sides had four units of guns, while the British had four battalion guns.
The terrain was rolling, but largely unobstructed. Looking from the Franco-Bavarian side, to the left was a village, the control of which was more or less the objective of the game, and then moving to the right, about half way between the town and the right hand edge of the table was a small farm with a number of hedged fields.
Both sides deployed simultaneously, 300mm in from the table edge. Both armies deployed their cavalry on either flanks. Between the cavalry wings, we Franco-Bavarians then deployed a brigade of three battalions of French infantry to the right of the village, then the guns, followed by one brigade of French then one of Spanish infantry further to the right. Next were my five battalions of Bavarians, with a French battalion attached. The Anglo-Dutch pretty much mirrored our deployment.
It became clear to me at the start that my Bavarians were poorly posted behind the farm, and any possibility of  manoeuvre was negated by the hedges. So I opted to shift further right. To cover this move the cavalry on the right advanced and was promptly countered by the English cavalry. A sharp action between the leading regiments ensued in which I came off the worst and one of my regiments was driven from the field. The next round I lost another regiment of horse, but managed to hold the line with the other two regiments, while the infantry filed into line. 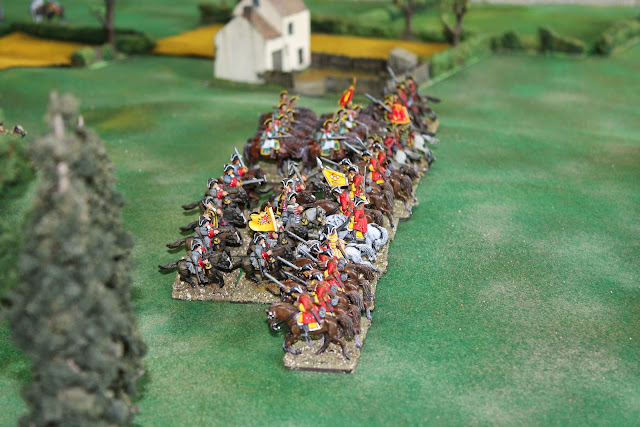 The opening cavalry action on the Franco-Bavarian right
On the opposite end of the line the English cavalry forced the French regiments back, but failed to break them. A seesaw action ensued here which eventually saw the English regiments driven off. 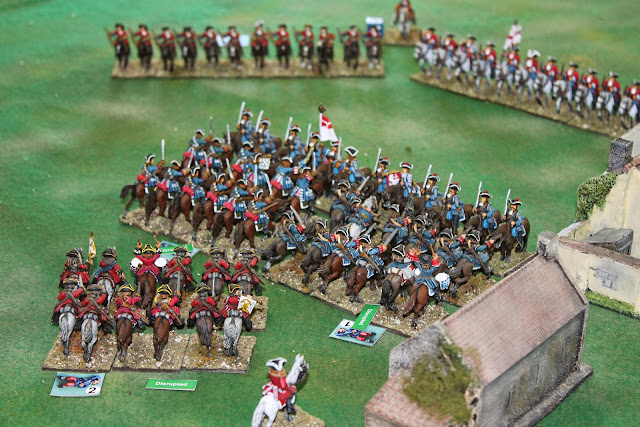 The early stages of the great cavalry action on the left
In the centre the infantry fight developed slowly. The English guns played havoc on the leading French battalions and when the two forces came within musket range, the superiority of the Anglo-Dutch musketry was quickly demonstrated. Three of the leading French battalions were badly cut up. However, the battalions to the rear pressed forward and smashed the leading English battalions, but at a terrible cost to themselves and the left wing of the Franco-Bavarian line was compelled to retire from the village. Two battalions to their right held their ground, despite severe losses, while still further to their right a French and a Spanish battalion drove forward, routing one English battalion and pushing another one still further back, before being forced back themselves. 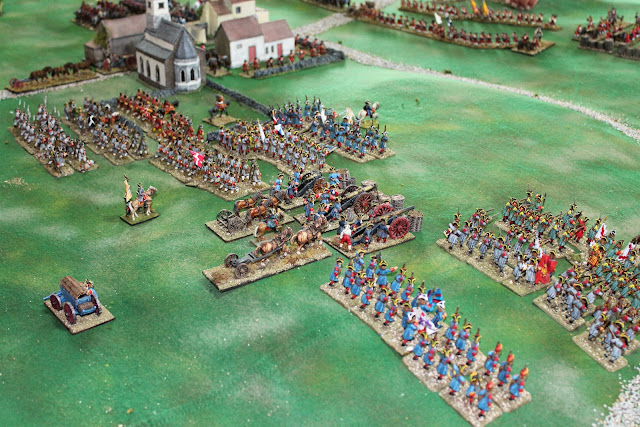 The French infantry prepare to advance 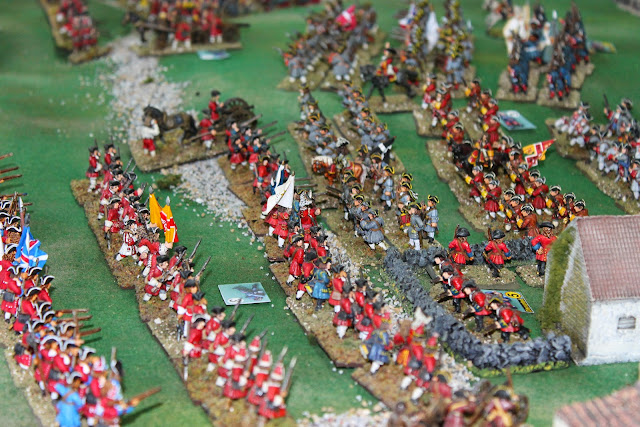 The English infantry press forward towards the village... 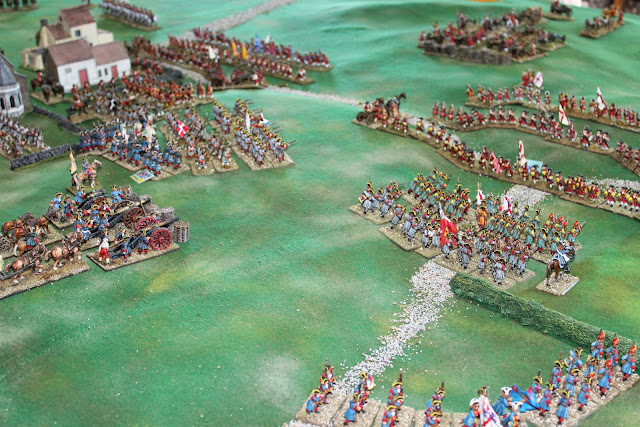 ...but the French and Spanish counterattack
On the extreme right of the Franco-Bavarian line a combination of good Bavarian musketry and good luck on the part of the French cavalry destroyed two English cavalry regiments. The Bavarian infantry then  advanced and drove back two English battalions, but failed to break them. The fight here settled into a stand off. 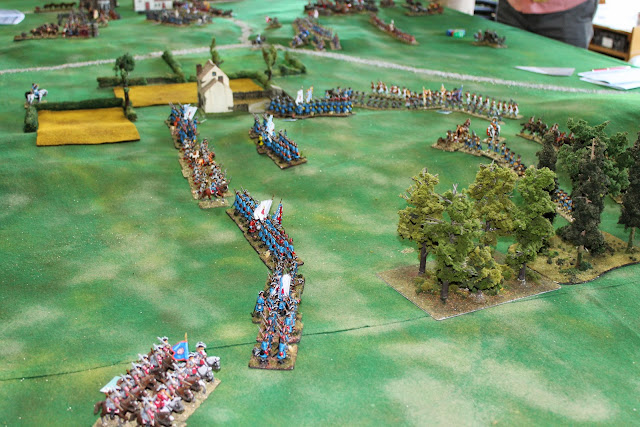 The Bavarians finally get into action
At the other end of the table, the English took the village, but the the French cavalry, with the British cavalry destroyed, was free to operate against the flank of the Anglo-Dutch artillery and the rear of the English line.
The game ended here. The honours were fairly even. If anything the Franco-Bavarians held the upper hand because the French cavalry was set to sweep into the English rear.
Posted by Mark Strachan at 21:48 5 comments: