A Second FPW Prussian Battalion and yet more AWI British

Last night I finished the Second Battalion, 74th (1st Hanoverian) Regiment, well almost finished…this batch has been sitting around on the painting table for a while awaiting the arrival of the five recruits required to finish the last stand that are still enroute from Nottingham. Hopefully that parcel will arrive soon, not only to finish off this unit, but so that the lead/plastic pile is not completely flattened.

Also completed is the 57th Foot. There is just one more line battalion to go for this collection, to be followed by one unit of combined grenadiers and a couple of gun sets - also enroute. 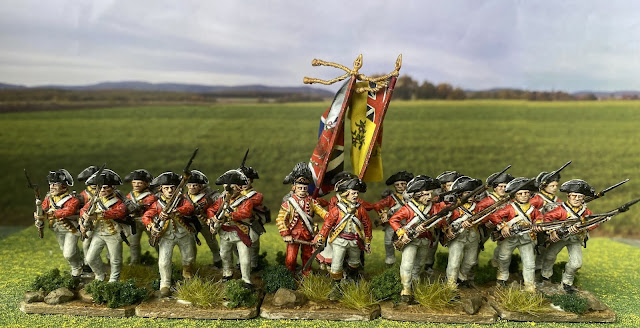 Yet another British unit has cleared the uniform store and made into to the parade ground. This time it is the 49th Foot.

I have chosen to do this in the advancing pose. 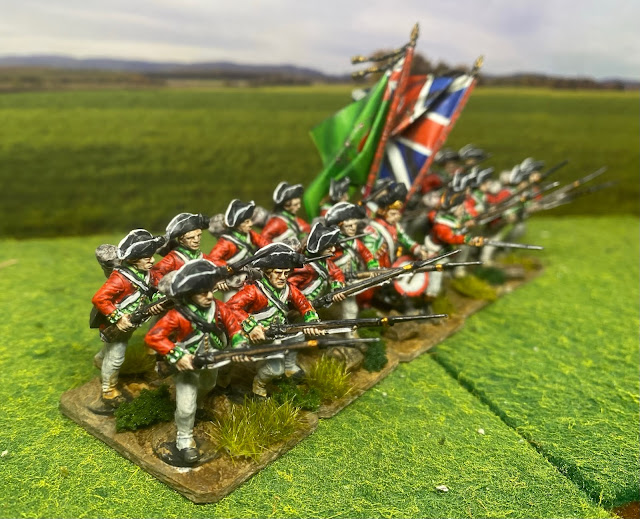 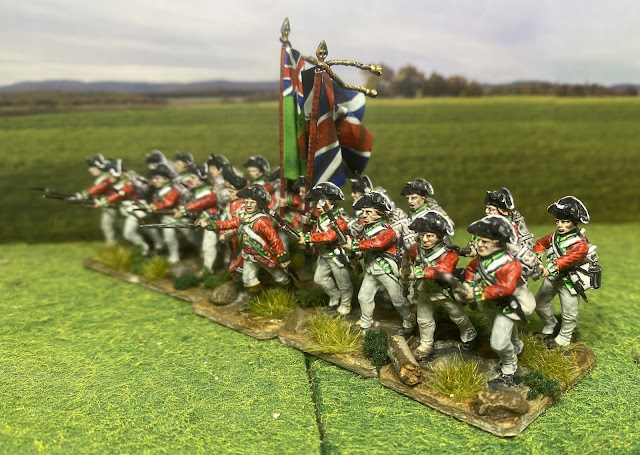 There are just two more battalions of British infantry to go to complete this project. Meanwhile the uniform store is now clogged up with Prussians from 1870.

While in the last few months my postings have been somewhat erratic, as I have explained in earlier posts it is because a major yet to be disclosed project has been in progress for our annual week of gaming at Lake Tarawera. This has been no small project, counting 16 large terrain pieces, 30 buildings and about 50 smaller terrain pieces, plus 35 mounted and 616 foot figures…and I have only painted one of the two forces involved. Our COVID lockdown has helped speed up the completion and knocked about three weeks off the project timeline.

Sadly Tarawera Week has been cancelled this year but the project has been completed, although it will remain undisclosed for now in the belief that the Tarawera event will eventuate in the New Year. But the suspension of that project has me working on the AWI British and the addition of this the 63rd Regiment of Foot. 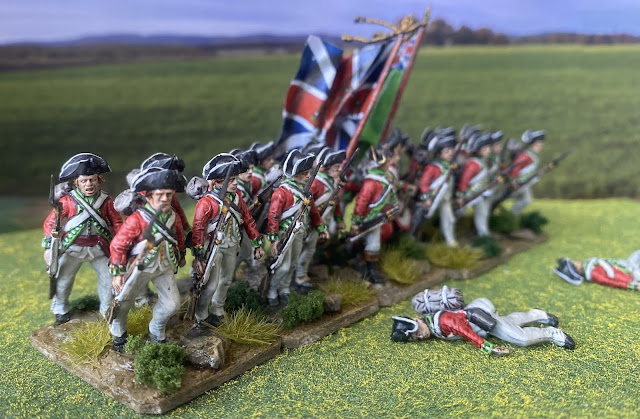 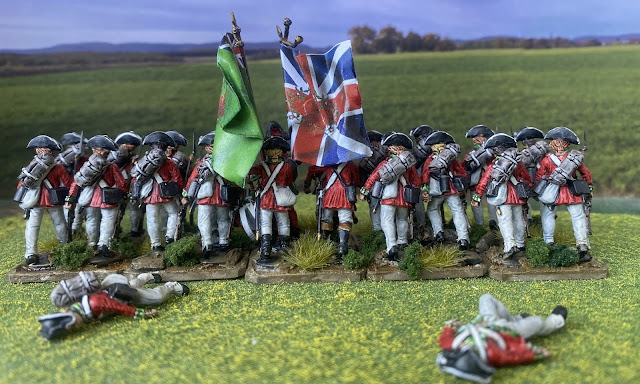 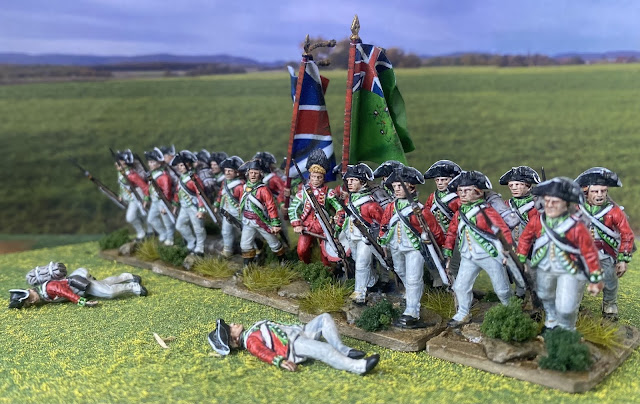 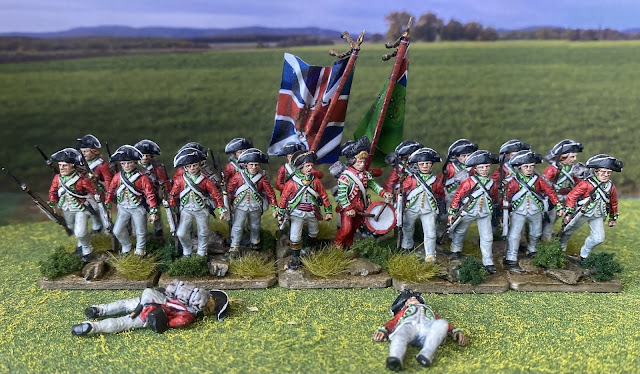 Next off the production line is the 49th Foot, another unit with green facings,  but will be in a different pose.

Yesterday saw the completion of the third unit in my British AWI expansion. This time it is the 17th Leicestershire Regiment. 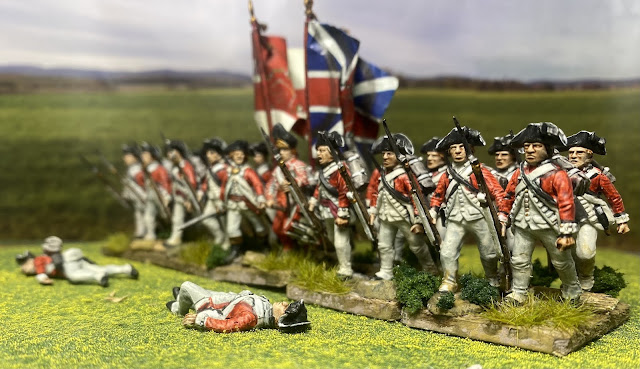 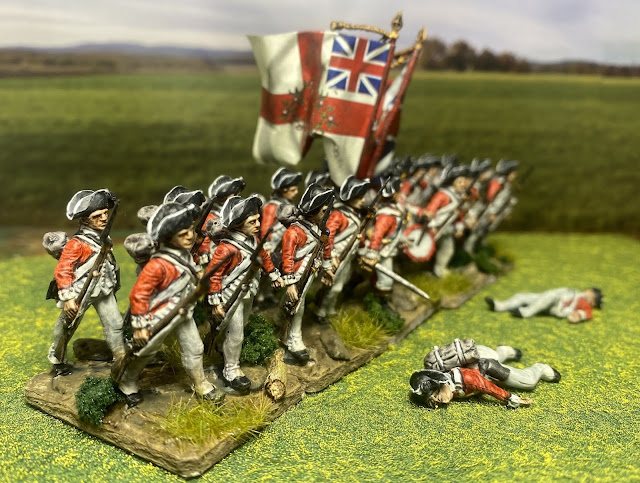 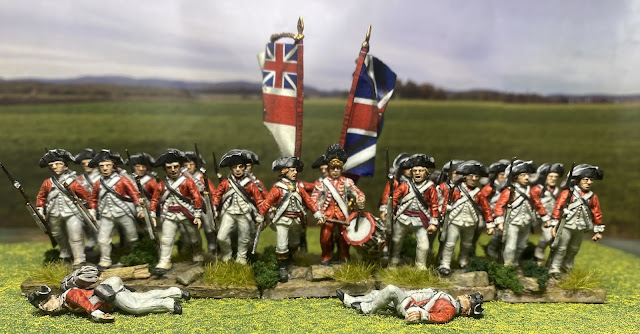 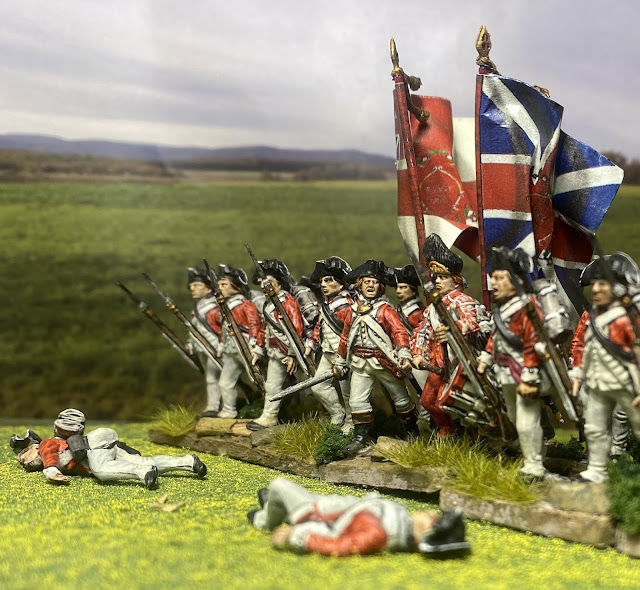 The First of the Perry Plastic Franco-Germans

You knew I couldn’t resist, right? I mean the first significant release of 28mm Franco-Prussian War figures in nearly 40 years and tat conflict being my most favoured period of play. With my last order with the Perrys I ordered a box each of the advancing and skirmishing figures just to test the water…and received them I can say that the water is just fine!

No sooner had the boxes arrived that I assembled the first box to figure out how I want to organise and base them. My plan is to base these on stands of six figures, each representing a company, and four companies to a battalion. It took a few days to clear the painting queue but over the weekend I commenced the painting these.

My interest in this conflict was first piqued many years ago when I read a the chapter about the Battle of Spicheren in Donald Feathersone’s “Wargames Campaigns” and ever since I have had a fascination with this battle. It is quite fitting then that I have decided to base this collection around the VII Corps that was at the centre of that battle (I may live to regret the decision to use this corps rather than the VIII because VII had cuff piping whereas VIII did not and after painting several hundred figures I expect to be fed up with cuff piping). So this battalion has been done as the First Battalion, 74th (1st Hanoverian) Regiment. This regiment was one of the thirty odd regiments that were added to the Prussian army after the annexation of a number of minor states after 1866 and because of this I have given the all the 1867 Picklehaube and the 1868 standard.

I also decided to do the entire unit in Puckelhaube because in the early stages of the war - the Imperial Phase - it was the most common headwear. I had read that in a recent article but couldn’t remember where do  in support of that statement I reviewed more than 100 images of Prussian troops in action and noted that although some officers and a very few rank and file troops were portrayed wearing the fatigue cap the vast majority are wearing the Pickelhaube. In the later stages - the Republican Phase -  there seem to be more fatigue caps being worn, presumably as equipment shortages began to bite.

Last  night I completed the basing of the battalion and here are they are:

I really like how each figure can be made unique in a battalion with a slightly turned head or an arm slightly differently positioned.
Then I turned my attention to how to handle skirmishers in this period. As a group we have never managed to successfully use skirmishers without specialist light units becoming super troops. Even the light companies of several battalions tend to end up being able to magically coordinate fire amongst themselves and deliver the equivalent of a full battalion against a single target. In reality there were few major actions during the period 1700 to 1871 where light troops played more than a peripheral role. Yes they were and essential element of the advance into action to feel the way forward and in 1870 that was the basis of German infantry tactics, but once the enemy was found he could only be driven by mass.
I want to try to recreate the tactics I described in detailing an earlier post (here). To do this I have decided that any unit or sub-unit can deploy a skirmish stand for each front line stand. If deployed in a position not too close and not too far away from the main body the skirmish stand will shield the main body from small arms fire, but not artillery fire.
It may seem like an indulgence but I have used the skirmishing figures that come with the Perry boxed sets to create specific skirmishing stands. Below are the first our of those stands. I like how each stands can be made into a vignette and am particularly pleased with the stand where one chap is offering comfort to is wounded comrade while the other stands watch.

The way these stands are deployed in front of different formations as as below:

Now this does create an apparent anomaly in that if a battalion was to break into separate companies and deploy skirmishers would be able to fire with four dice whereas a formed full battalion would only fire with one die. I am comfortable with this because is does create that nimbleness that gave the German infantry an advantage, but at they same time those smaller units are more vulnerable to attack and will have command and control problems.
Under this method when skirmishers fire, no matter how many stands are in the skirmish line, they only fire with one die so that at best their fire is annoying but over a few turns could chip away the enemy. But while their fire will not be overly damaging to the enemy they way they take damage will also be different in that if skirmishers are fired on they will not take casualties from fire. Rather, if they are shot at and have unsaved hits the skirmish line will halt and cannot move closer to the enemy until the fire ceases or the main body comes forward to support them. They can continue to fire at the enemy when halted, but if they take additional unsaved hits they will be driven back on the main body.
There are four more boxes of Prussian infantry on their way.
Posted by Mark Strachan at 15:26 37 comments: