The Year to Date - A Review

I Have Been Thinking About Woods

That's wargames woods of course.
Terrain has always been important to me in a wargame. It probably has something to do with my interest in model railways in my youth. But I have always struggled with how to portray woods on the games table and have long wanted to come up with some sort of practical solution in a wargame. 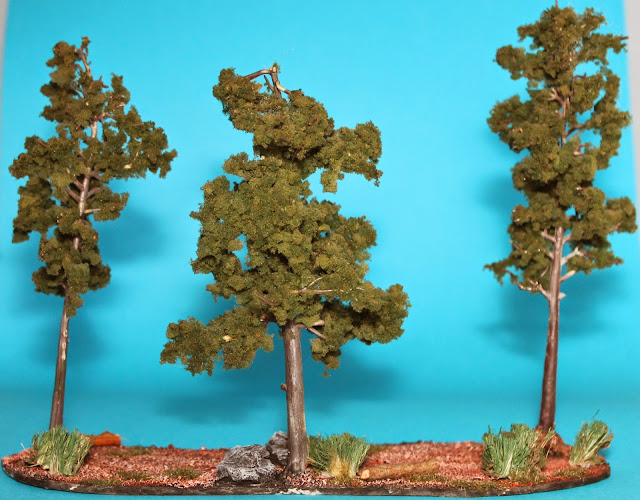 For years we have used blocks of woods, defensive zones we called them, where each block is about 200mm x 150mm. Each defensive zone could be occupied by a pre-defined sized unit, usually a battalion. The unit was free to move about within the zone, firing in any strength from any direction it chose.  This method worked really well for horse and musket type games, but when we began to play games from the Russo-Japanese and Great War periods where artillery is fired using templates, these blocks of woods became difficult to use, because determining the actual positions of individual stands became difficult.
One option was to use a piece of felt of a different colour to the main table baise cloth and distribute the trees loosely on that. This clearly defines the area of the wood, but the trees always fall over and the edge of the woods just doesn't look right to me. I needed to find some middle ground between the inflexible defensive zone concept and the flexible but messy felt edge concept. Here is what I came up with.
Trees are on bases with a depth of between 50 and 70 mm. Trees are spaced so that a single stand of 50mm width can fit between them, with each base measuring between 120mm and 200mm wide with between two and three trees each.  These bases are used to form the outer edge of the wood. In the inner area is scattered some forest floor ground cover. I got this idea from photos of Bruce Weigle's beautiful 1:300 scale terrain, but again there was a flaw. The open space in the middle, although it allows models to be moved freely within the woods, it is just not aesthetically pleasing.
So my answer was to create small clumps of trees that could be placed in the middle of the outline to bulk out the wood. These clumps could be moved around to permit troops to move within the wood without disturbing the outline of the wood. So with this in mind I set out to make some woods and I decided to make some burnt out woods for WWI.
I decided to use some Woodland Scenics fir trees.
I had around 40 of these but they were generally too tall for the shattered trees of an artillery ravaged woods of WWI France. So kept about one third of them at full height and cut some if them into two, three in some cases which had the dual purposes of creating more trees and getting them to a realistic height. I then cut the card bases and mounted the trees and coated the base with a course sand and left it to dry. 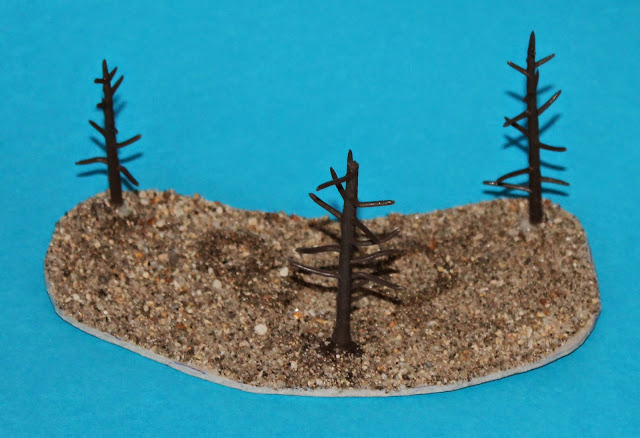 I then glued on some stones and when these were dry I painted the bases black. 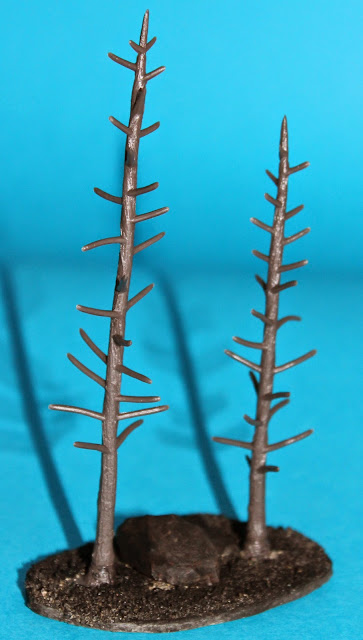 Then I drybrushed the whole base in a terra cotta tone and then two or three lighter tones. The next step was to paint the stones several tones of grey and then add some long tufts of grass from sisal twine. 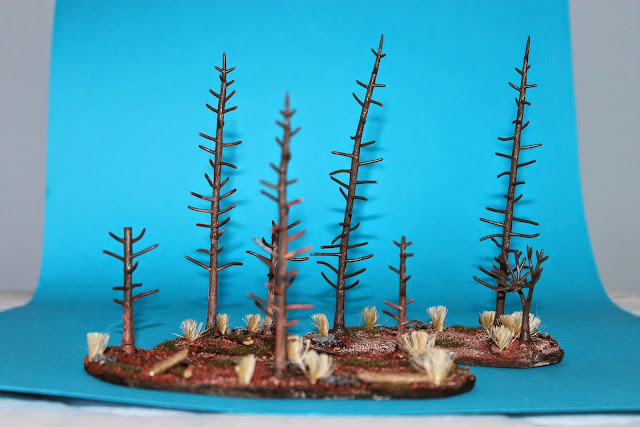 I have completed one section with foliage, for other than the  WWI artillery devastated woods, and twelve sections of the devastated pieces. Another twenty pieces to go...then there are the hedges, but that is another time.
Posted by Mark Strachan at 17:08 4 comments: