In the Sands of Egypt

Today’s regular Sunday game was set in Egypt in 1801. Having locked the French up in Alexandria, the British forces under Hutchinson have commenced their movement on Cairo. The fortified town of Rahamaniyeh was taken and the army advanced along the fertile edge of the Nile while a flotilla of small boats ferried supplies up river. Near Shubrakhit, some fifty miles north of Cairo,  the Nile bends and a broad island restricts the channel. Here the French have built a redoubt in which they have positioned a battery to dominate the channel. If the advance is to be pressed further the position must be carried. It is known that a significant French force is deployed in support.

The French force is made up of three infantry brigades and two cavalry brigades.

The British had four infantry brigades and are supported by an Ottoman force of five cavalry and six infantry units.

Moore’s Brigade
• 23rd Foot
• 28th Foot
• 42nd Foot
• 58th Foot
• Corsican Rangers
• One 12lb gun battery
Craddock's Brigade
• 8th Foot
• 13th Foot
• 18th Foot
• 90th Foot
• One 6lb gun battery
Stuart’s Emigré Brigade
• De Watteville
• De Rolls
• Minorca Regiment
• Dillon’s Regiment
• One 6lb battery
Guards Brigade – Stuart
• Coldstream Guards
• 3rd Guards
• One 6lb battery
Unattached
• Hompesch’s Hussars
• 16th Light Dragoons
• 2 units Dismounted Light Dragoons
• 2 12lb artillery batteries
Ottoman Forces
Five units Mamelukes
1 unit Jannisary infantry
1 unit Nazim-i Cedid infantry
1 unit of Albanian infantry
3 units of Ottoman infantry
How the game ran.
The French chose to deploy one brigade with the reserve artillery in and around the redoubt and the two smaller positions. One infantry brigade, supported by the  chasseurs a cheval and dromedaries, was held off table to the immediate left of the redoubts. The third brigade and the cavalry brigade were held off the table opposite the village.
The British chose to place Moore’s Brigade opposite the redoubts, with Craddock’s Brigade to their right. The Emigre and Guards Brigades were further to the right. Finally the Ottoman troops held the far right, way out in the desert.
The Ottomans swarmed across the long ridge and occupied the village, blocking the path of the French troops on the far left, preventing them from entering the fight.  Meanwhile opposite the redoubts Moore’s Brigade made slow progress on the fertile land, having to cross numerous irrigation ditches. The Guards moved sluggishly but soon got into a position where they could bring superior numbers against the French left.
However the failure of the French extreme left to arrive sealed the fate of the rest of the French force as the British lapped around their flanks. 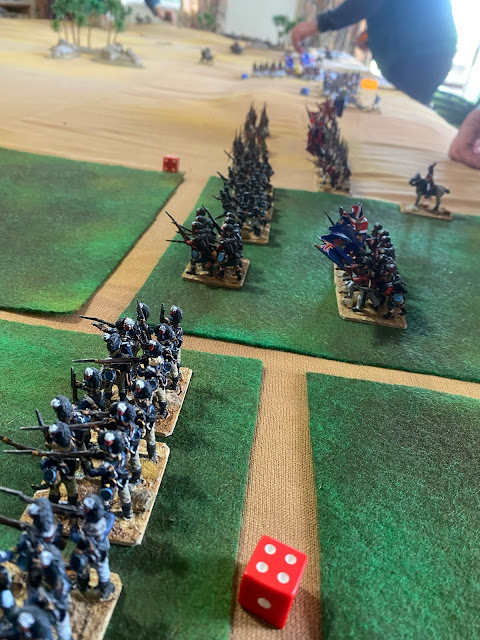 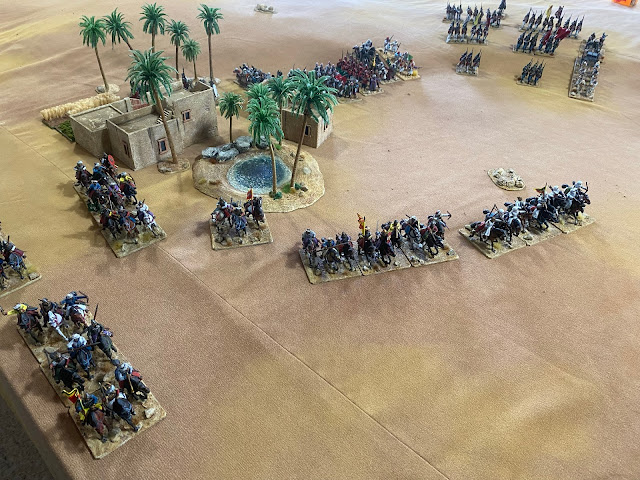 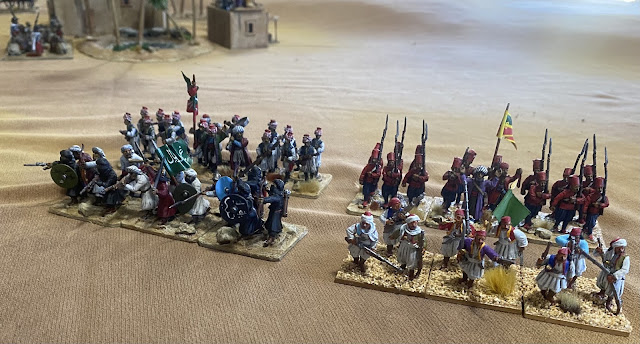 Email ThisBlogThis!Share to TwitterShare to FacebookShare to Pinterest
Labels: British in Egypt, French in Egypt, Napoleonic