The Battle of Kleinkorbetha, October 1813

Yesterday’s wargame was a large Napoleonic scenario based on the aftermath of the Battle of Leipzig.


It is late October 1813. The Grande Armée has been defeated at Leipzig and the Emperor has returned to France to organise a national defence. The various remaining elements of the army were left to extract themselves as best they could, retreating west across the River Saale.

When the main crossing point at Halle was denied them by Yorke’s Prussians the French sought to cross at Neu-Augustburg. The Russians soon closed that crossing at leaving only the lesser crossing at Kleinkorbetha available. During the night of 20-21 October the only intact infantry Division, that of General de Division Etienne Legrand arrived at the town, where he discovered a temporary division made up of four regiments of dismounted dragoons guarding the remains of a destroyed bridge. More units, including Devrue’s infantry division and Pajol’s light cavalry division arrived during the night. 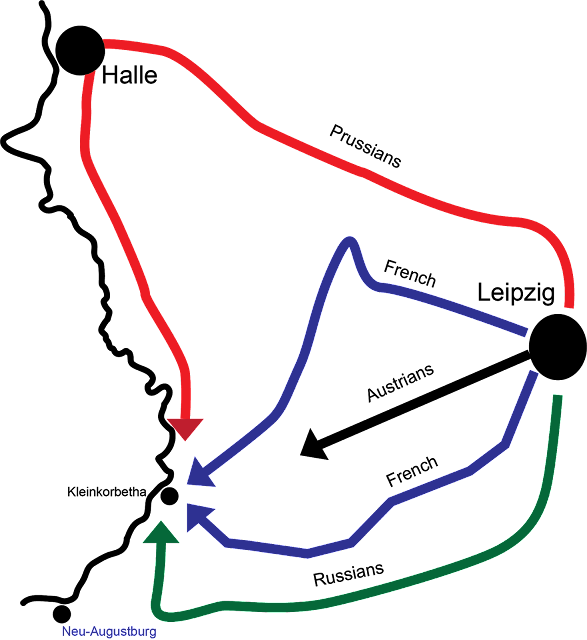 At dawn Legrand reviewed the damage to the bridge in the company of his engineer who replied that the bridge repair was difficult as there were no materials in the town. The best he could do would be to demolish buildings and use the timber but that was going to take time. Legrand ordered him to get on with it.

Towards 0730 la Houssaye’s 6th Heavy Cavalry Division rode in from the south stating that the Russians were less than two hours behind them. Shortly after General Defrance, commanding the 2nd and 4th Cuirassier divisions, rode in stating that the Austrians and Prussians were closing from the north and east.

Defrance and Legrand agreed that since these troops were perhaps the only relatively intact Grande Armée commands, it was vital to try to get them across the Saale and back to France. It was clear that they were going to have a fight on their hands and they decided that they had only two options: fight a rearguard action until the bridge could be built or try to smash through to the south. If necessary some of the troops could be sacrificed to enable the others to make their exit.

Meanwhile the allied force, despite having suffered dreadful losses at Leipzig, were determined to pursue and trap as many French units against the Saale River as was possible and thousands of French deserters were rounded up. The Austrian army was so disorganised that it had only a small force available, but the Prussians and Russians pushed troops forward in mass. Yorke pushed on to Halle and denied the crossing there, while the Russians pushed west and southwest to secure the crossings at Kleinkorbetha and Neu-Augustburg.

When the Cossacks reported that a French force of two infantry and three cavalry divisions had gathered at Kleinkorbetha and that the bridge there was destroyed, the Allied command ordered a concentration there to crush the French forces against the river.

Statistically the forces on the table totalled

How the game worked out

The French decided to hedge their bets: to try to break out to the south while the engineers tried to rebuild the bridge. LeGrand’s division and the two cuirassier divisions would try to break out, while Devue, and Houssaye’s dragoons would defend against back the Austro-Prussian force, anchoring on the farm to the north, and Pajol’s light cavalry and the dismounted dragoons would guard the centre.

The initial deployment and allied troops arrival was as in the rough sketch below: 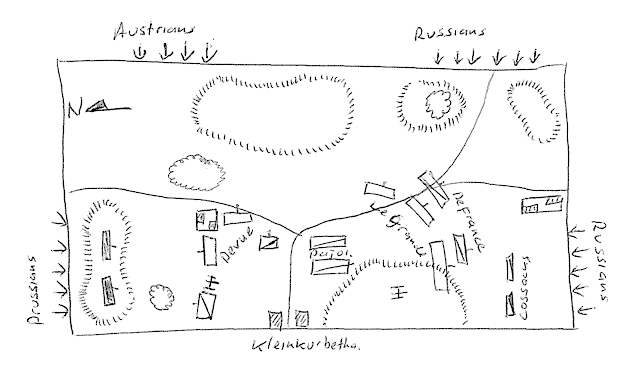 Note that the only allied troops on the table at the start were a Prussian brigade in the north and the Cossacks in the south. Some allied troops could arrive on turn one and the rest up to turn four, depending on a die roll. The bridge would take ten turns to be rebuilt.

The initial French deployment is as follows: 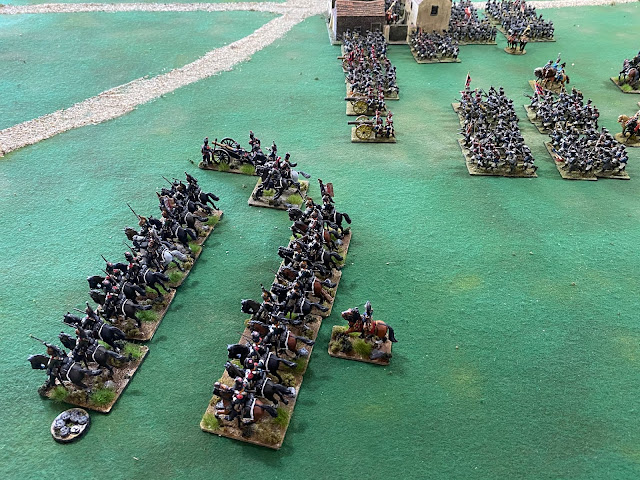 The Allies had the first turn and the Russians failed their die roll and did not arrive that turn, while the Prussians opened fire from their position to the North while they waited for their reinforcements that also failed to arrive. 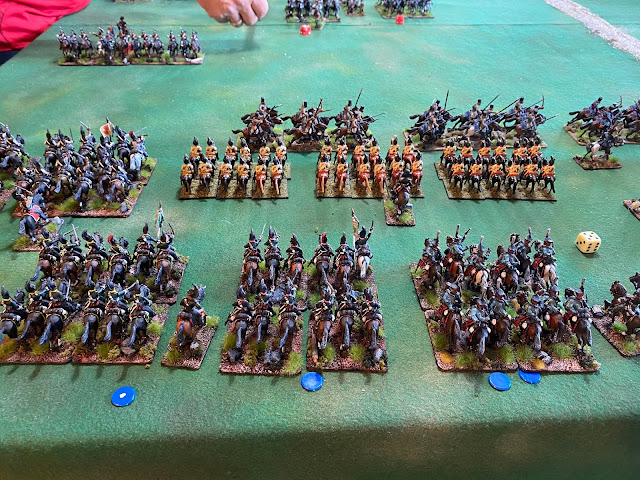 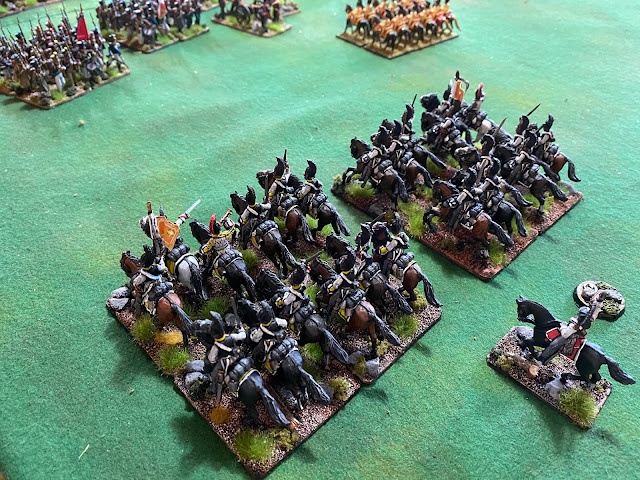 Legrand’s second brigade, supported by the 2nd Cuirassier Division made good time on the left of the third brigade and threatened to disrupt the Russian infantry as they poured in from the  southwest. One cuirassier regiment charged and came within a hair’s breadth of breaking one Russian infantry battalion that was unable to form square – only good supporting fire from other units allowed the battalion to survive. Another regiment charged the Russian guns as they attempted to deploy and despite taking a blast of canister from a supporting battery smashed into a battery still in limber, destroying it and then smashed another battery beside it, destroying it as well. A third cuirassier regiment drove off two Cossack units. But here the Cuirassiers ran out of steam and retired to reform. Unfortunately for the French these regiments were badly knocked around and two of them dispersed. 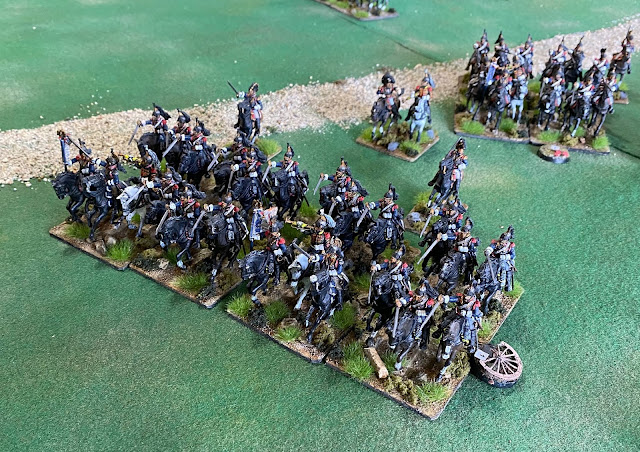 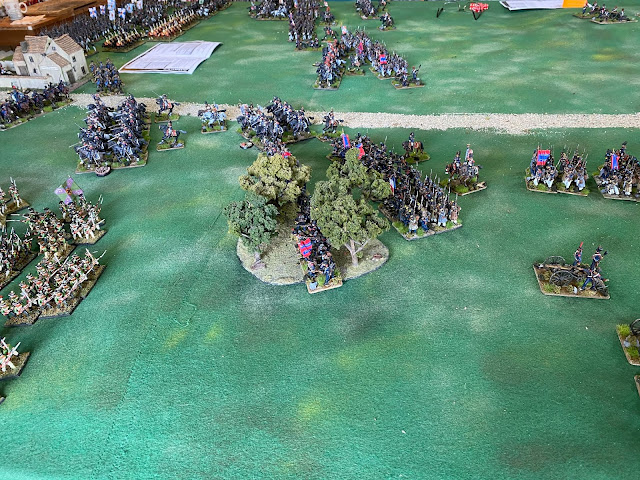 At the opposite end of the table the Prussians were characteristically slow to get going and Devue was able to hold his position with some ease. Not until the Austrians arrived on turn 5 did the Prussians begin to move. Even then it was a slow and deliberate advance.

On the Russian front the Russian infantry arrived en-masse. Facing twelve battalions the seven battalions of the Legrand’s third brigade prepared for the onslaught. They didn’t have to wait for long. In the first musketry exchange both sides suffered heavily, but the Russians were able to push the issue and in a single turn much of the French brigade collapsed and fled to the rear. While the second brigade was able to disengage and fall back, sacrificing two battalions in the process. 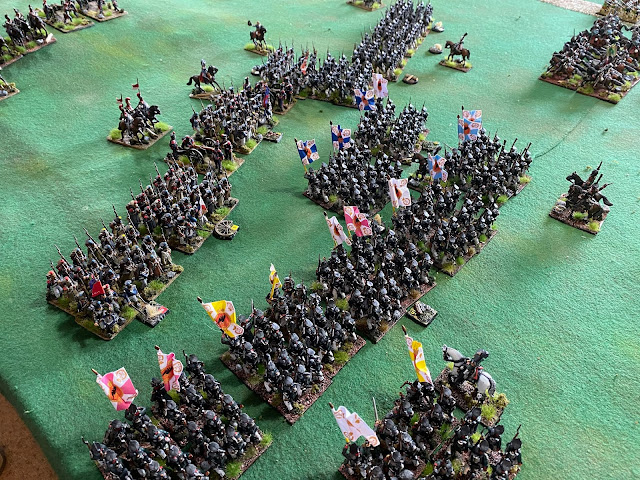 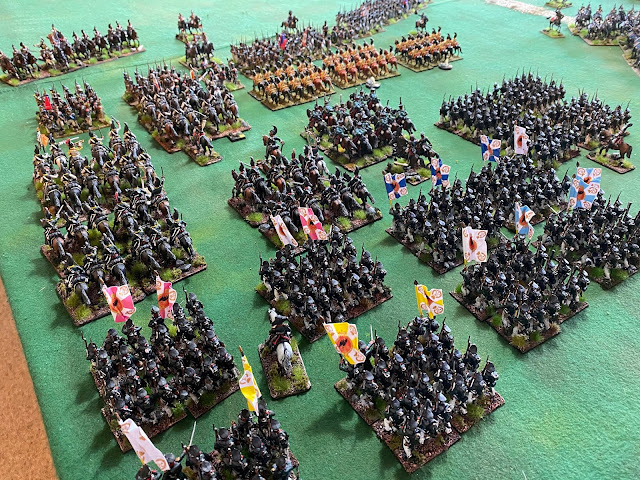 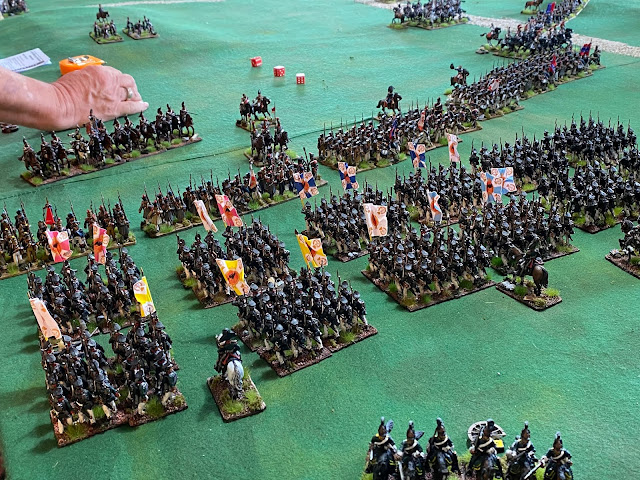 While this was going on Devue was feeling the pressure from the Prussians, but fortunately the engineers were close to completing the bridge. Devue disengaged two of his three brigades and retired under the cover of the dragoons, while a single brigade hung on as long as possible in the farm to give the rest a chance to escape. 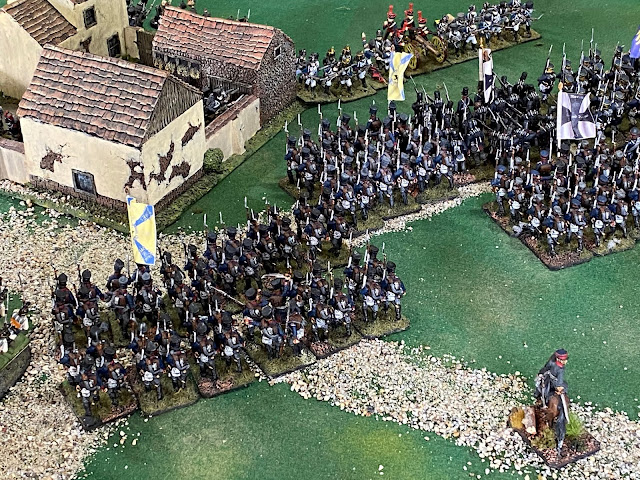 The Russians continued to apply pressure and were beginning to make for the town. As turn 12 came around we called the game. 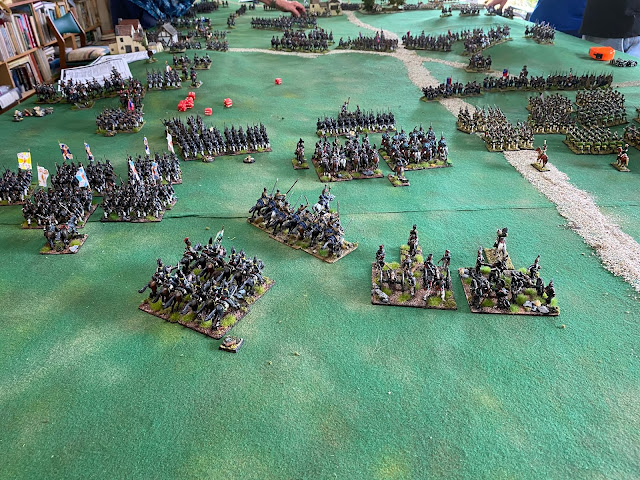 It was a desperate fight and the French had lost about half their infantry (one of Devue’s and two of Legrand’s brigades) along with two thirds of the cuirassiers. The dismounted dragoons and the light cavalry were untouched and the mounted dragoons only slightly damaged. Of the Allies the Prussian lost about one quarter of their strength while between a third and a half of the Russian units had been mauled.