Today’s game was set in 1795 and based loosely on the disasterous attempt to establish a Royalist base at Carnac at the northern end of Quiberon Bay. In the original expedition the four British infantry battalions failed to cross the Channel due to bad weather, but in this expedition a significant British force of eight  battalions plus a force of marines and sailors from the fleet supported a small emigre force four battalions and a gun in a beach landing somewhere in the bay.

The map of the table is as below, with the starting positions of the French Republican forces shown in blue and the landing places of the British/emigre forces shown in red (the emigre troops landed on the extreme left, the British infantry in the two centre locations and the naval troops with the two arrows on the right.

The Republicans had heard from their spies that an attempt to land was to be expected and as the game began the French hussars picketed the shore line, although a heavy fog prevented them from seeing the approaching boats (the fog would lift on a die score of 4+). 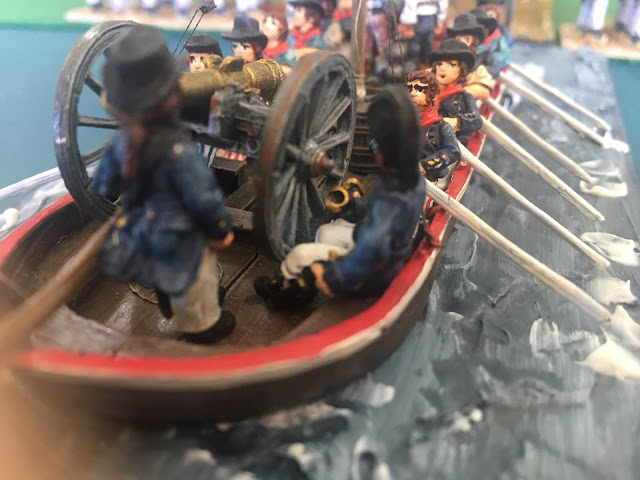 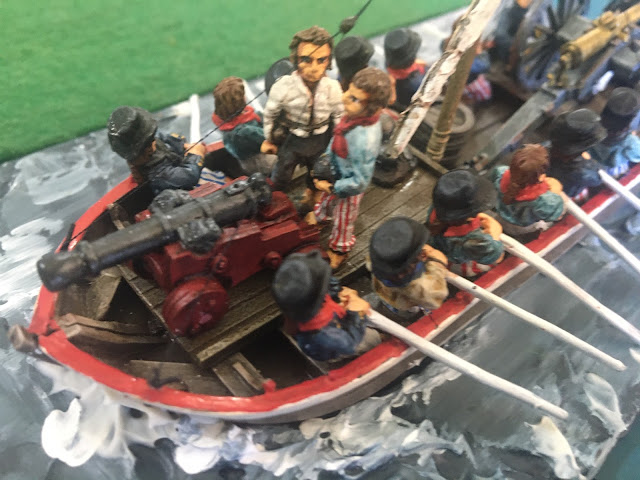 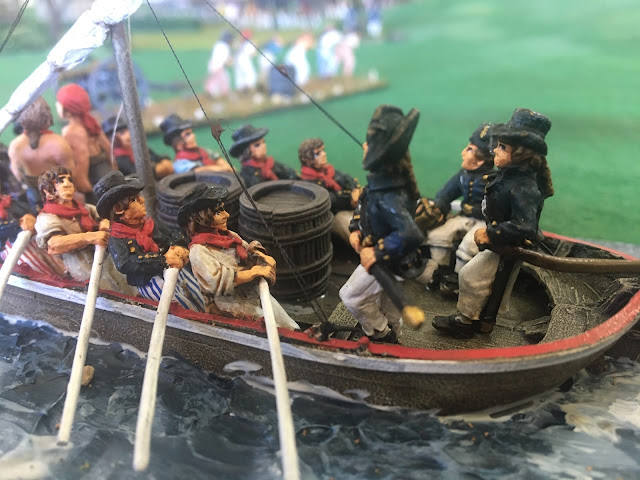 The boats hit the shore just as the fog began to lift and the battalions disembarked. 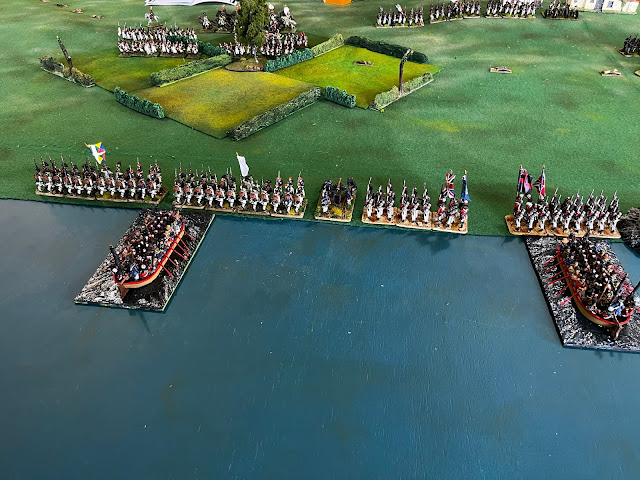 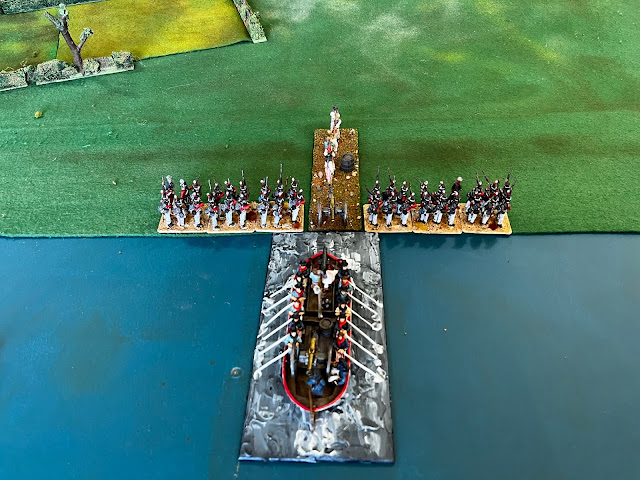 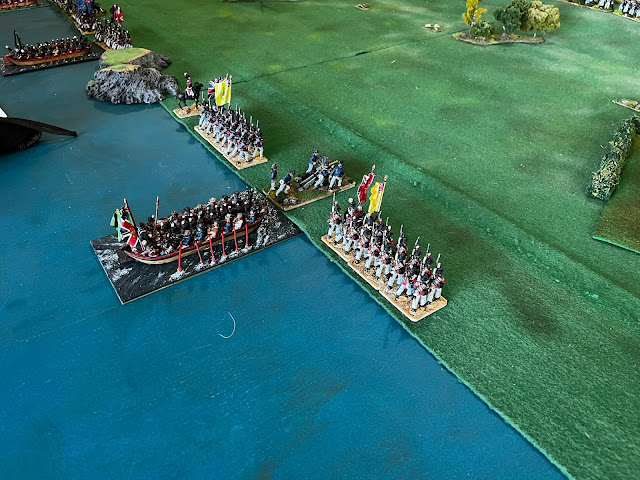 The French pickets raised the alarm  and the Republicans were called to arms. 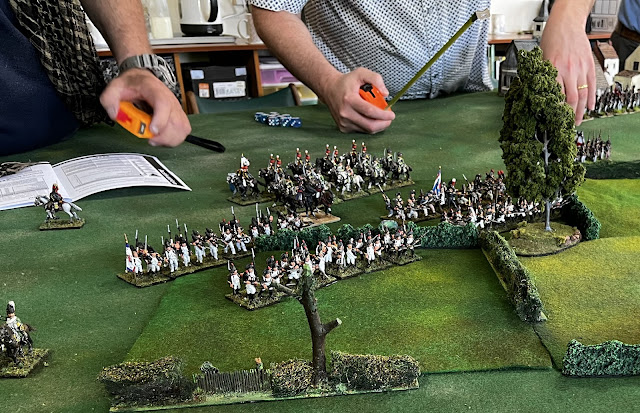 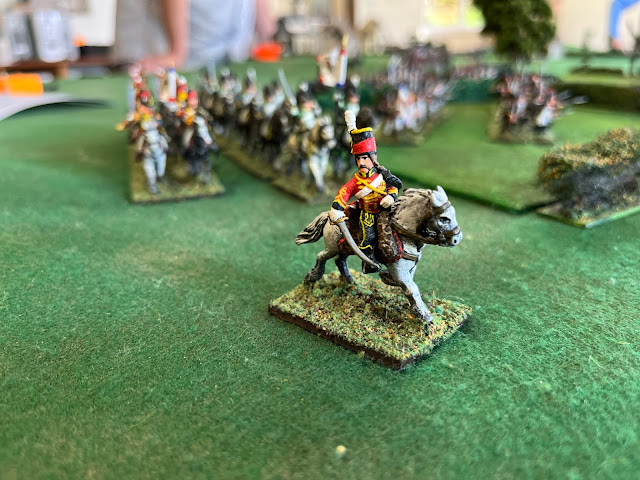 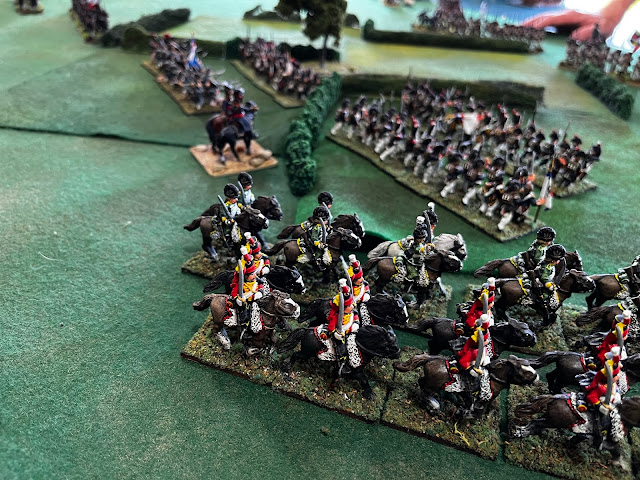 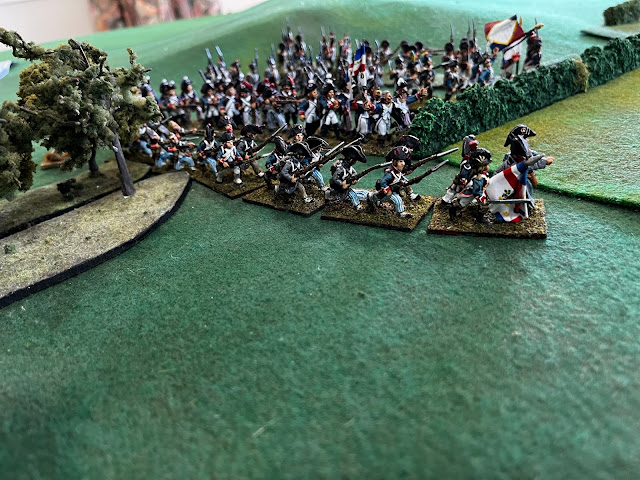 While the British and emigre forces formed up on the beach the Republicans came forward more quickly than anticipated and a difficult fight developed in front of the emigre landings where two attacks from the cavalry were repulsed before a proper line could be established. 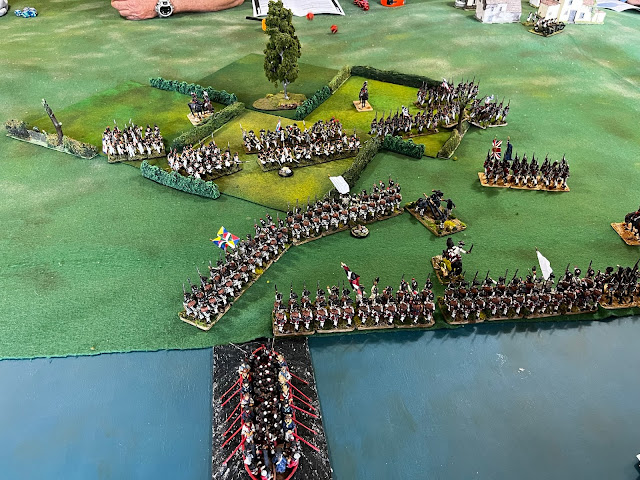 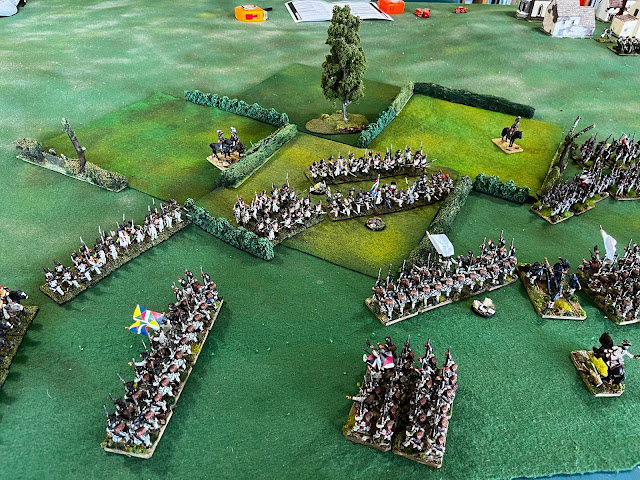 At the British landing point things did not go well with two battalions sent packing. Only the intervention of two battalions of guards in the second wave brought some stability. 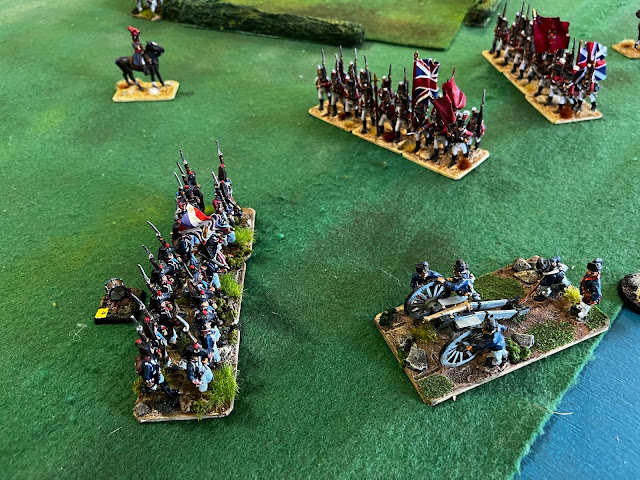 An attack in the flank of one of the guard battalions threatened to turn the tide again, but by a miracle of dice rolling the guards repulsed the attack. 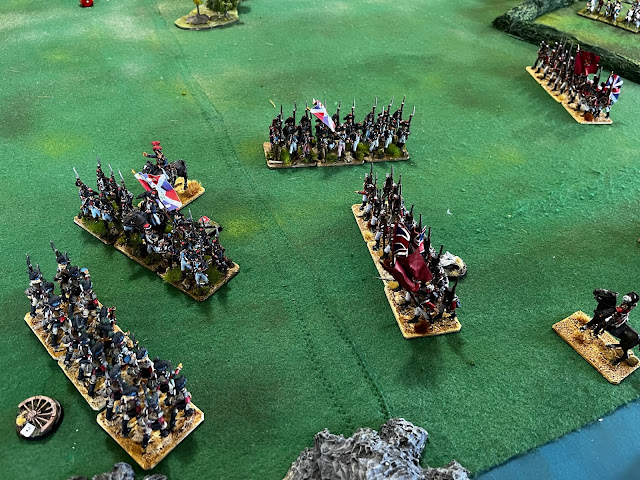 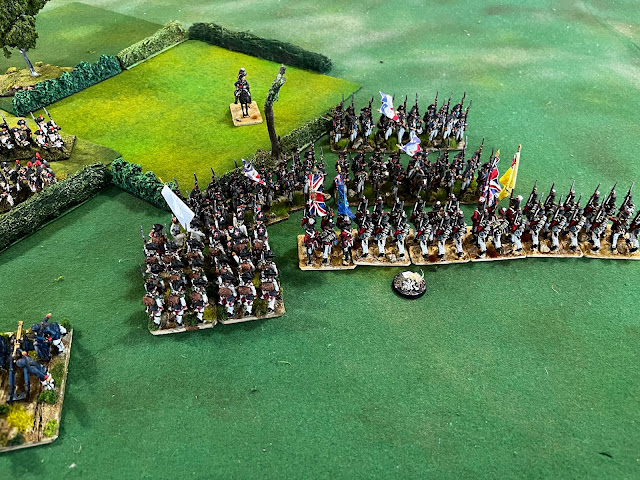 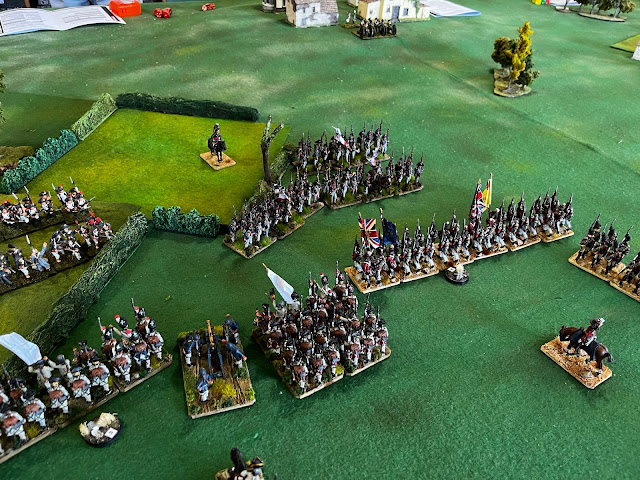 But the naval contingent, despite the efforts of the gunners and the marines, failed to make any headway against the Republican left. 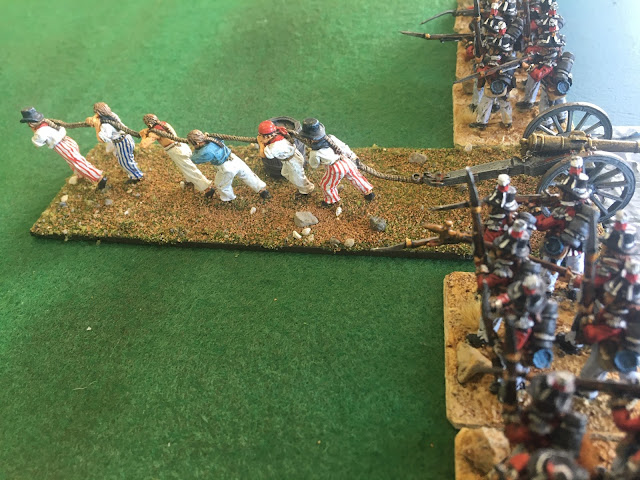 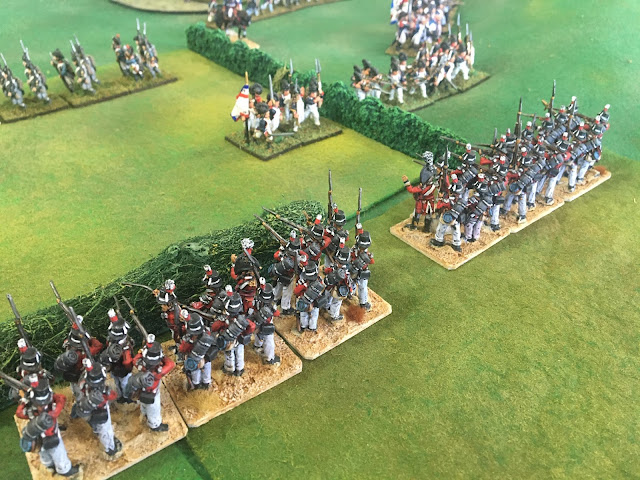 When the naval contingent gave way, four fresh Republican battalions were free to operate against the British flank and the line was rolled back on the emigre forces. An evacuation was the only option, but no one will ever know the number that got away…because we called the game there.

With the loss of the American Revolution and the disasters of Dunkirk and Hondschoote, this was the last straw. The British military had fallen to its lowest point. Questions were asked in the house and there were calls for the Government to resign. The only positive to come out of the whole debacle was that the Duke of York undertook a series of reforms that would transform the army and turn its fortunes around.