Work on the 2nd Tirailleurs Algériens Regiment continues and presented here is the Second Battalion, for use with the Franco-Prussian Crimean Wars armies. 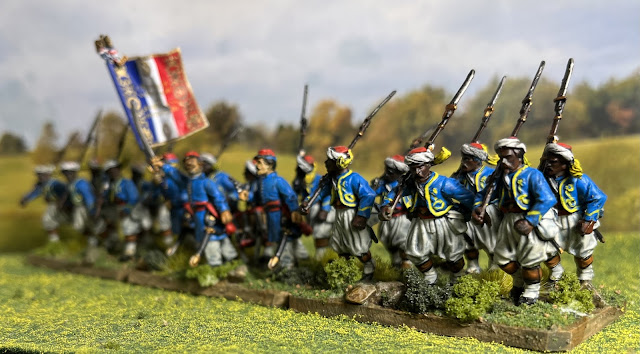 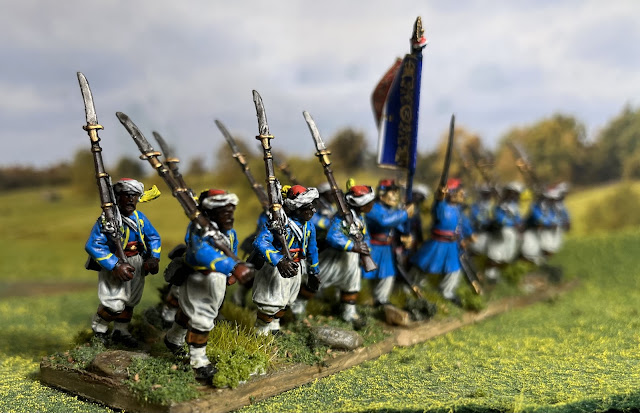 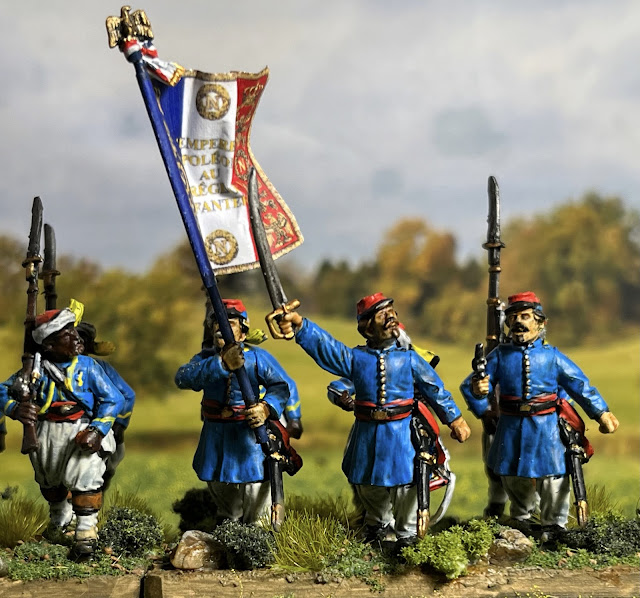 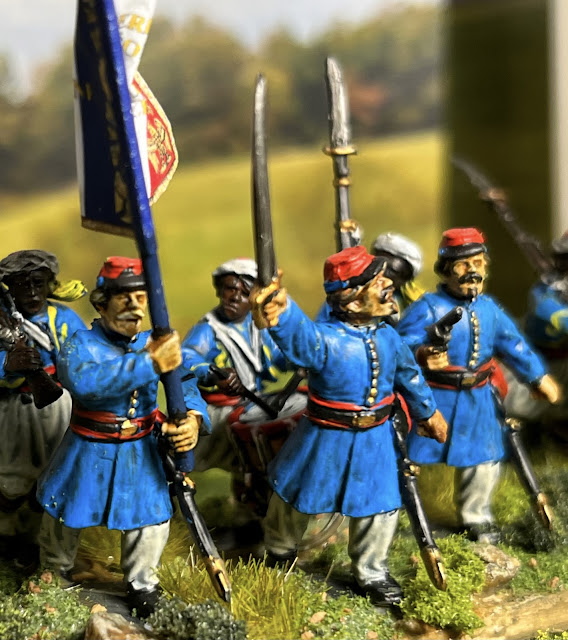 To expand on my description of this units history in a previous post, in 1870 the regiment fought its most significant action at Froeschwiller on 6 August where it formed half of Lefèvre’s Brigade, Raoult’s Division, 1st Corps. On the night of 5 August the regiment, like most of the 1st Corps, camped on the heights above Woerth where it weathered a heavy rain storm. At 0640 they were rudely awakened by artillery fire from a German battery supporting a reconnaissance against Woerth and, along with the whole division, were called to arms.

Raoult's Division held the centre of the French line, with to Ducrot's Division to the left, Lartigue’s to the right and reserves to the rear, covering the five fingered ridge front of Froeschwiller as far south as the village of Elsasshausen. Colonel Suzzoni's 2nd Tirailleurs Algériens Regiment was on the left of the Division line in the Froeschwiller Wood with the  2/2nd Tirailleurs on the extreme left facing the  Saw Mill on the Soulzbach stream. The battalion's left flank was unprotected, but the right was secured by Captain Wohlfrom's Mitrailleuse battery, the 9/12th. To Wohlfrom's right the 1/2nd Tirailleurs broke back at a right angle to the foot of the spur. The 3/2nd Tirailleurs extended the line up the slope of the spur through the vineyards to the crest where two battalions of Colonel Rogier's 48th Regiment, the other half of the brigade extended the line across the crest of the spur as far as the Froeschwiller-Woerth Road. The regiment was in an exposed position that  jutted forward in a salient.

Clearly Suzzoni had expected a severe fight on this day because at 0700, he had ordered that each man be issued with another two packets of ammunition - an additional 24 rounds per man. The action came quickly to the Tirailleurs. At around 0930 Bavarian infantry entered the Langensoultzbach Forest and reached the southern edge, which lay some 100 yards to the left rear of 2/2nd Tirailleurs, shortly afterward. The arrival of the Bavarians on the southern edge of the Langensoultzbach Forest came as a surprise to the French infantry within the Froeschwiller Wood. The northern edge of the wood was unoccupied except for a few pickets. The 2/2nd Tirailleurs Algériens, with their left flank threatened by the arrival of the Bavarians, turned several companies to face the threat. Soon after German artillery fire from beyond Langensoultzbach soon began to fall amongst them and the battalion commander, Commandant Jodosoius, was killed. Raoult responded quickly to the threat and parts of the 8th and 13th Chasseur Battalions, 48th, 36th and 78th Regiments were rushed to bolster Suzzoni’s line.

At around 10:30 the Bavarians pushed out of the forest in an attempt to cross the ravine between the two woods. They were instantly struck by a hail of Chassepôt bullets and the advance was abruptly halted. The Bavarians stumbled back to the relative safety of the trees, but found that their outdated Podwils rifles were no match for the Chassepôt and when many of the Bavarian companies could not be rallied the battalions were withdrawn to the eastern bank of the Soultzbach stream.
While the withdrawal of the Bavarian eased pressure, the Tirailleurs soon felt renewed pressure from the Prussian infantry of V Corps that advanced from the south and east. With the assistance of other units of Raoult’s division the Tirailleurs held their own with losses mounting. At around 1400 the Bavarians came forward again with the Bavarian II Corps entering the Langensoultzbach Forest and the Bavarian I Corps making directly for the Froeschwiller Wood. Again the Chassepôt in the hands of the Tirailleurs showed its dominance sweeping the open ground pinning the Bavarians down in the water meadows between the Sauerbach and Soultzbach streams. The Bavarian recovered and  pressed forward again. Suzzoni had his men hold their fire until they came within point bank range then opened a devastating fire that halted the South Germans in their tracks. Seizing the moment, Suzzoni ordered the Tirailleurs forward in a bayonet charge along with elements of the other battalions in the wood, with with two battalions of the 1st Zouaves from Ducrot’s division in support and the Bavarians were driven back beyond the Soultzbach stream. The Tirailleurs followed closely and established themselves in the woods beyond, but when Ducrot ordered the Zouaves back to bolster the collapsing French right flank, the position was untenable and the Tirailleurs fell back to their position in the Froeschwiller Wood.
The Bavarian troops rallied and pressed forward, but the Tirailleurs were not ready to give up the fight. Suzzoni was dead and command passed to the lieutenant colonel, but no sooner had he taken command than he went down. Two of the battalion commanders had been killed, the regiment was under command of Commandant Mathieu of the first battalion and all three battalions were under command of captains. The Tirailleurs hurriedly constructed a breastwork of their packs and branches and held off repeated attacks of the Bavarians, but ammunition was running low. When two battalions of the Prussian 59th Regiment stormed forward they hit with such force that they overran the position capturing many Tirailleurs and driving the rest off to the west.
It had been a desperate five hour fight for the Tirailleurs and they suffered terribly losing 76 officers and 1,359 men from the 86 officers and 2,200 that reported for action that morning.

It is interesting to note how these North African soldiers, serving on French soil for the first time, were viewed by both friend and foe. The Pastor of Froeschwiller’s observation was one of fear for the enemy. “Oh woe! fair-haired maidenhood of Germany!” he exclaimed, “where these fellow burst in, howling and lamentations will attend them”. After the fighting ended  a captain of the Bavarian staff observed a gruesome sight in the form of a Bavarian soldier who appeared “crazed, red faced...as if on a hunt”. The captain soon found that the man was indeed on the hunt for any Schwarzen or “blacks” - Tirailleurs Algériens - who many Germans falsely suspected of atrocities: gouging out the eyes of the prisoners, cutting off the noses and ears of German casualties or shooting the wounded. This man took his retribution for these supposed crimes by putting the muzzle to the head of every wounded Algerian he found and blowing their brains out. Maybe his actions were a reflection of an attitude voiced later by Bismarck: “There should have been no question of making prisoners of those blacks. If I had my way every soldier who made a black man a prisoner would be placed under arrest. They are beasts of prey, and ought to be shot down.” Such a genuinely false slur on the reputation of these magnificent soldiers.