A few months ago a local retailer had a 30%  discount on their Perry Miniatures plastics stock. This was too much for my inner magpie to resist and the single box of ACW Zouaves that they had in stock were quickly snapped up. Then I though, “but I already have four regiments of zouaves, do I really need more?” And the answer was no, but they might work for French Zouaves for the any of the wars of the Second Empire.

I have used these for the Zouaves in the Crimea and plan to use them for the Franco-Prusssian War. I don’t really need  a second unit of Zouaves, but what about some tirailleurs algériens in their summer uniform of blue jackets and white trousers? Why not indeed, and the tirailleurs served in the Crimea too.

There is a lot wrong with using the figures for the FPW - they are armed with Minié rifles and not the Chassepôt, they should have a sword bayonet instead of the standard socket bayonet and the drum carried is completely wrong. But since they have an ability to serve in three possible conflicts in the Second Empire, I have decided to overlook these faults.

By buying another six command frames I could make the single box of 42 figures into three battalions of 18 figures each. I also figured that I could solve the sword bayonet issue by taking the leftover facine knives from the Prussian infantry sets and trimming them careful with a scalpel. A few spare eagles from some French cavalry cavalry sets were also put to good use with the standard bearers.

I chose to create the 2nd Regiment that was formed in 1842 with its garrison at Oran. Raised from the indigenous population with European officers the 2nd had a deep and varied history. Throughout the 1840s and early 1850s it participated in the conquest of Algeria earning battle honours at the Siege of Laghouat in 1852. More honours were awarded for action at Sevastopol in the Crimean War and at Solferino. A part of the regiment went to Mexico where they fought in the Battle of San Lorenzo in 1863.

The regiment came to France in 1870 with a ferocious reputation and fought at Froeschwiller on 6 August, defending the eastern corner of the Bois de Froeschwiller. For seven and a half hours they resisted the attacks of the Bavarian I and II Corps, were blasted by the massed German batteries finally were smashed by the assault of the Prussian 59th Regiment. Of the 84 officers and 2,220 men that had been available for action that morning, 76 officers and 1,359 were casualties. They fought at and surrendered after Sedan. Some of the depot companies were formed into regiments de marche and fought in the Republican armies in the Loire campaigns.

After the Franco-Prussian War the regiment was involved in the conquest of Madagascar and again in Algeria at the Battle of Ksar el Azoudj in 1903. It was heavily engaged in the Great War in many of major actions, including Charleroi, the Marne, the Argonne, the Meuse, Champagne, Verdun, Moreuil and Ternier. 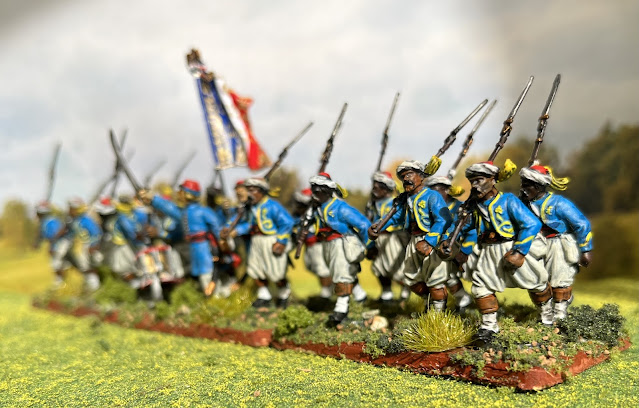 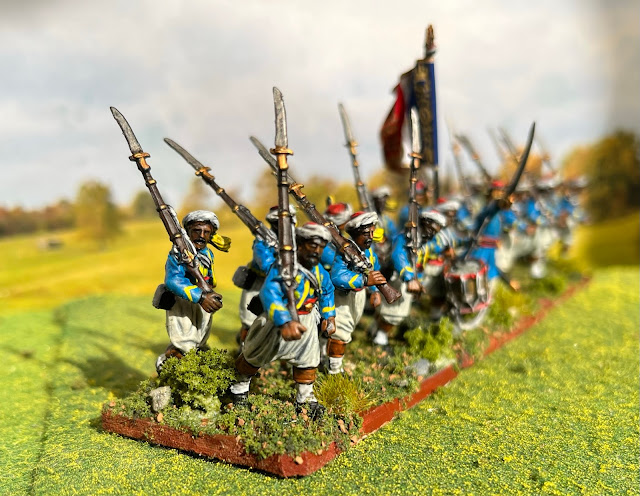 In the Second World War they were initially incorporated into the Vichy forces in North Africa, but joined the Allies in 1943. After the War they were involved again in Madagascar, Indo-China and in Algeria. With the granting of Algerian independence the regiment was disbanded. 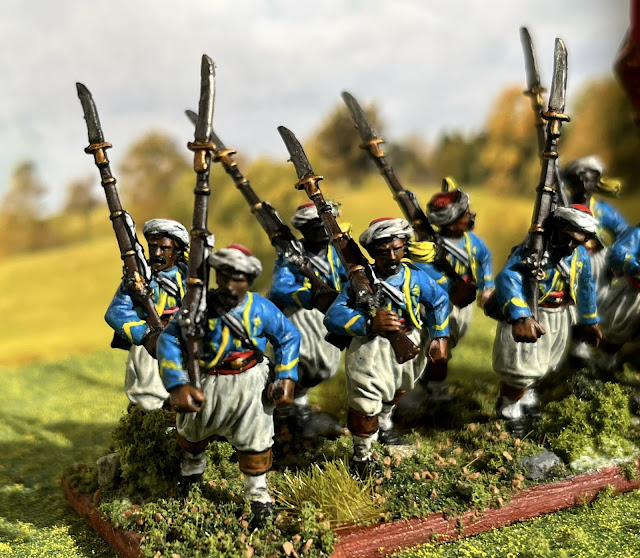 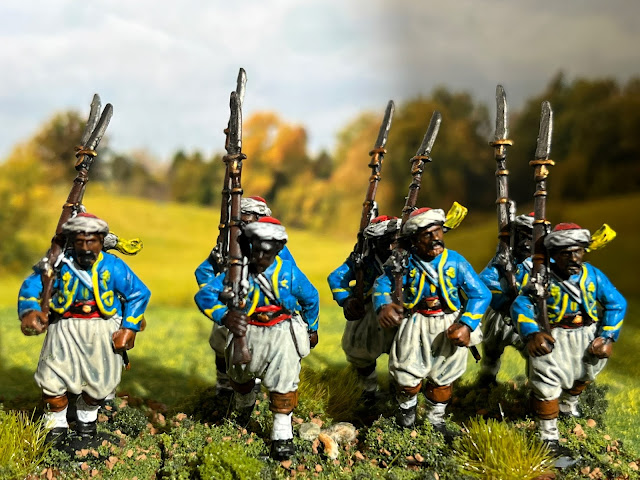 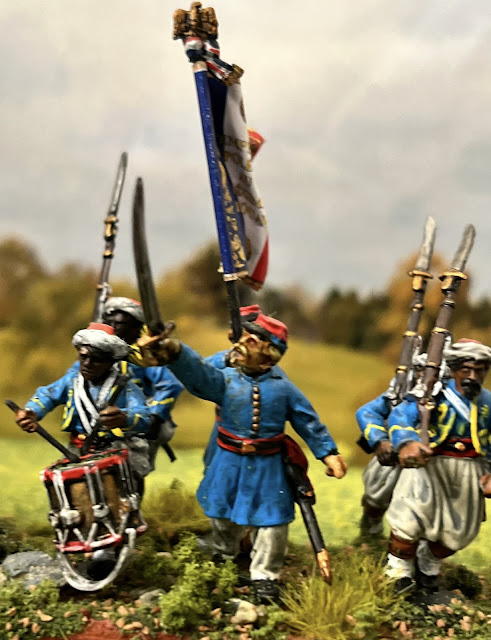 I am pleased with the way these chaps came up. I particularly like the way the blue came out (especially on the officer and standard bearer). There are two more battalions assembled and waiting in the painting queue.