Can’t See the Wood for the Trees

Wargames trees have always posed three problems for me.

First is that to represent established woods or forests I like tall trees, which means for my preferred 28mm figures they need to be somewhere between 100mm (4”) and 150mm (6”) tall. For fruit trees and smaller less establish plantations trees can be as low as 50mm, which will also suit some of our 15mm games. Some 30 years ago we were fortunate as group to secure a significant stock of the Heki (a German model railway scenery manufacturer) trees when a local distributor quit the market. These met the height criteria, but after all that time were in need of upgrading The problem here is that much of what is around today does not match the quality of the models we bought all those years ago and where quality is available the price is prohibitive.

The second problem is the robustness. Wargames trees get pretty roughly handled. The Heki trees have done us well over the years because they were very well made, but they are definitely showing their age: the plastic trunks are becoming brittle so that some have snapped off the base and branches have broken off or the foam chip used as foliage has either fallen off or has faded. The question is how to create that robustness?

The third problem is their use. I am a visual sort of person and I like my trees and woods to be on bases. The issue this causes is that it can become difficult to move stands of figures within the woods.

Way back in 2014 I posted another (link) article on woods that solved the third problem so problems one and two need a solution.

A couple of weeks ago I saw a model railroad tutorial on YouTube (link) on making trees that gave me an idea. However, this method of construction would not be robust enough for gaming and the weak point I saw in this method was in the trunk, so I thought of an alternative - the old twisted wire trunk. I decided to give it a go.

Taking four lengths of 16 gauge wire, each about 200 mm in length, I folded each in half then roughly twisted them together, making sure that the looped end was untwisted.

Then the four twisted strands were twisted around each other to form the trunk and lower branches. 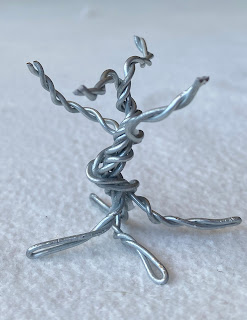 In the past when I have used this technique I have covered the wire with toilet paper coated with PVA to get that wrinkled bark look, but in keeping with the desire for robustness this time I chose to apply Sculpey polymer clay. This was quite a quick task and when all the wire was covered I scribed a bark texture into the surface, sculpted a base, fixed part of a bamboo skewer in the top to support the canopy and then baked it in the oven. 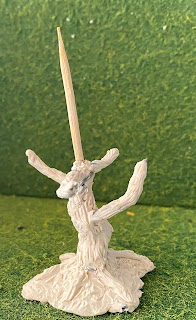 Once set and cooled I painted the trunk using Games Workshop Contrast Snakebite Leather thinned 50:50 with medium. Then to give tone I lightly drybrushed it with a grey/brown. 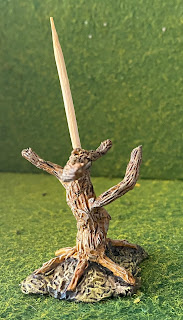 The next step was to create the foliage. This was done by cutting a strip of coconut matting, as shown in the YouTube video, from a hanging basket liner that was about 70 mm at the base and 25mm at the top. This was then cut into squares and then trimmed into irregular round shapes of ever decreasing diameter, divided in half (by thickness) and pushed onto the skewer and fixed with a drop of PVA glue at each level. A bit of trimming with some scissors got rid of the odd unwanted loose fibre. 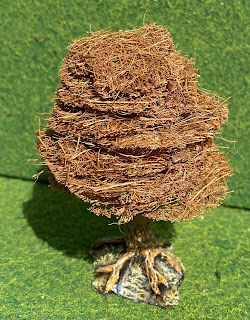 Before I added the foliage I sprayed the coconut matting black, to give depth. 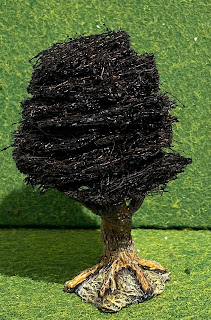 I then sprayed the foliage area with a spray adhesive and rolled it in some Woodlands Scenics clump foliage I had on hand and left it to dry in the sun outside...to avoid complaints about “that smelly stuff”. And here is the result. 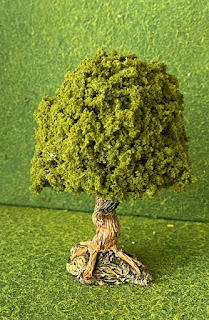 The completion of the first tree got me thinking about how I could do it better. The first thought was why do I need the wire form? All I really need is the base, the trunk and the skewer and I can make the base and trunk out of Sculpey, with the trunk wrapped around the skewer. I think the layers if coconut matting can also be spread out a bit too, to create space a more irregular shape. But all that is a subject for another post.