With the Great Paraguayan War project nearing completion thoughts are turning to how to game this war, when gaming starts again. I’m not one for refights of actual battles, preferring to create a scenario that has a basis in history. I have also been known to base a scenario on an actual battle from a different historical period. For the first games for this war I want to run a sort of campaign.

Wargames campaigns have always had a fascination for me. Perhaps it is because the Donald Featherstone book “Wargames Campaigns” was one of the first wargames books I owned (and I still flick trough it nostalgically today - nearly 50 years after I got it). I have designed numerous campaign systems - hex based, square based, area based and across a multitude of eras. A number of these have been presented here on these pages. Some have been full campaigns and some just a series of linked games - in this latter category the one that comes readily to mind is the French in Egypt series played back in late-2018 and early-2019. Yet oddly for all of this I have played very few and those I have played in have fizzled out, but that hasn’t curbed my enthusiasm for them and recently I have latched onto the concept of Snakes and Ladders systems. 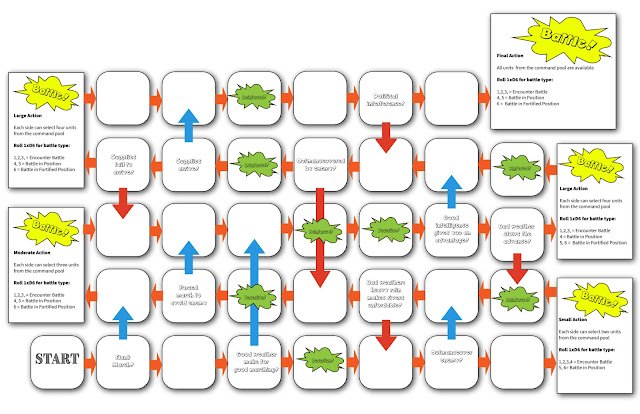 Now the idea is far from new and a number of wargame sites have featured articles on it in recent times (Steven’s Balagan, A Grab Bag of Games, Grid Based Games to mention three that come to mind immediately) and I have used the idea independently in the past as a tool for determining arrivals on the table. While the system does not provide the ability to manoeuvre freely it does provide potential for variance of force and attrition.

So what is my twist on the concept? Well all I wanted was to create a mechanism for a series of linked games. I wanted rash actions in one game to have repercussions in another. In my version of the game the armies involved are divided into commands:

Both sides play the Snakes and Ladders game alternately (each side rolls 1xD6 to determine who goes first) by rolling 1xD6 and moving through the grid according to the score and and directions indicated in the squares.

Battles are deemed one of three types: encounter, battle in position or battle in a prepared position. When a battle box is entered during play 1xD6 determines the type of action and in a battle in position of or a battle in a prepared position the player who enters the square is said to be the attacker and the other the defender. The player entering the square also rolls 1xD10 (re-rolling any 10s) using the score to determine the table plans as numbered below. These maps provide a broad outline for the table where dark green areas are impenetrable jungle, light green are smaller more open areas of timber or palms, the large black box with a cross is a mission, groups of three black blocks are villages, broad blue blocks are rivers,  narrow blue line streams and then swamp areas. All rivers are fordable to infantry and cavalry as major obstacles, and impassable to artillery. Streams are fordable by all troops. Swamps are impassable to all troops.

Deployment options are defined by the type of action. In all cases both sides roll 1xD6 and the higher score then picks the side they will deploy on. The deployment areas are:

In maps 1 and 5 the allies can use their Naval Support option. Naval support is always assumed to be on the river section marked with the red dot on the map. Naval Support is assumed to be off table and counts as two heavy batteries with all ranges measured from the corner point of the table. Note that this may well be behind a Paraguayan deployment position.

Off table reserve and flanking movements.

Attacking forces are permitted to deploy up to half of their force off table either as a flanking march or a reserve. All off table troops have to dice to come onto the table requiring a 5 or 6 on their first attempt, and a 4,5 or 6 on any subsequent attempt. They can have up to three attempts to come onto the table and troops that fail to arrive after three attempts, are ruled lost and will not arrive.

Off table reserves can attempt to come onto the table from the beginning of the second turn. The player does not have to declare where the reserves are coming on until their first attempt to dice for it.

Each time there is a battle and a unit takes losses, the losses are carried forward by a simple mechanism . In my rules units take losses in six steps. Losses of 1,2 or 3 do not affect order, but by accumulating 4 and 5 casualties order begins to break down and they are ruled disrupted, and when six casualties are accumulated the unit is shaken and very fragile. So my simple attrition mechanism is that any unit that takes losses of 4 or more in a battle reduces one unit size, so that large units become standard, standard become  small and small  become tiny. Tiny units remain tiny.

On the playing board are two special events:

I envisage this system also being used for American Civil War and Napoleonic campaigns.