A Visit to Carcassonne

As readers may have gleaned from my previous post I have some time in Toulouse. Leaving Stockholm at mid-day on Friday, I arrived at Toulouse via Munich at around 6:00 pm and was at my hotel half an hour later. This is my fifth time in Toulouse so I know the town centre reasonably well. After a quick stroll around some favourite haunts I found a restaurant in Place Capitole for dinner and had my favoured Maigret du Cannard and a large beer. Feeling a bit under the weather as a result of a bit of a head cold I took it easy on Saturday, but on Sunday decided to take the train to Carcassonne and have a look at the castle there.
The 10:49 train got me into Carcassone just after 11:30.  What had been a cold and overcast moring had brightened and warmed up considerably. I have been here before and could remember the way clearly from the station to the castle and the Cité, which is a walk of perhaps 2 kilometres. Before too long I had arrived at the Pont Vieux, or Old Bridge across the River Aude, which dates back to the 14th Century and for 500 years was the only link between the Cité and the Ville Basse (lower or new town) 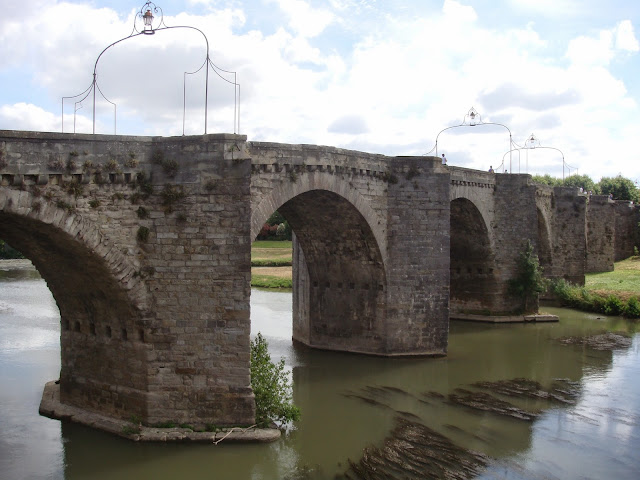 Here I get my first real view of the Cité on the heights beyond. From here it has a sinister look to it, its walls, towers and turrets darkly silhouetted against the bright eastern sky. 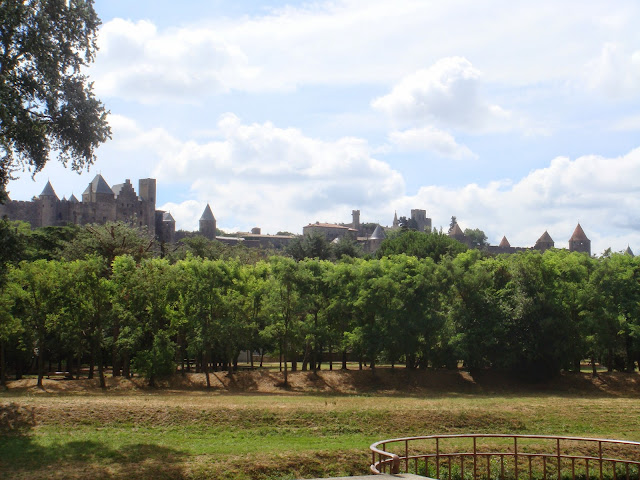 Built on the foundations of a Roman fort the Cité dates back as far as 925AD, but was restored to its current state by the architect Eugène Viollet-le-Duc in 1853, and was added to the UNESCO list of World Heritage Sites in 1997.

There are two entrances to the Cité, the Porte Narbonnaise, on the northern face, or the Porte d’Aude (or Barbican)  on the southern face. I chose the latter because it was the nearer gate, the path to which starts near the Church of Saint Gimer, also rebuilt by Viollet-le-Duc in 1859. The path ascends a steep slope to a level of perhaps hundred feet or more above the surrounding countryside, and on top of this height stands the Cité with its three kilometers of double ring walls and 52 towers. 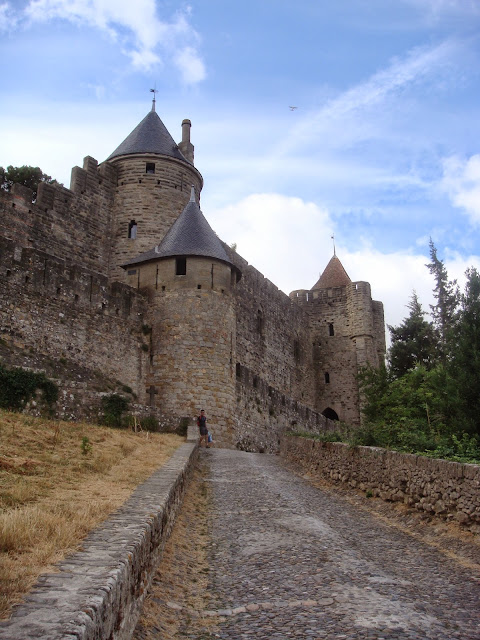 Above, approaching the Baribican from Saint Gimer and, below looking at back the gate from the inside 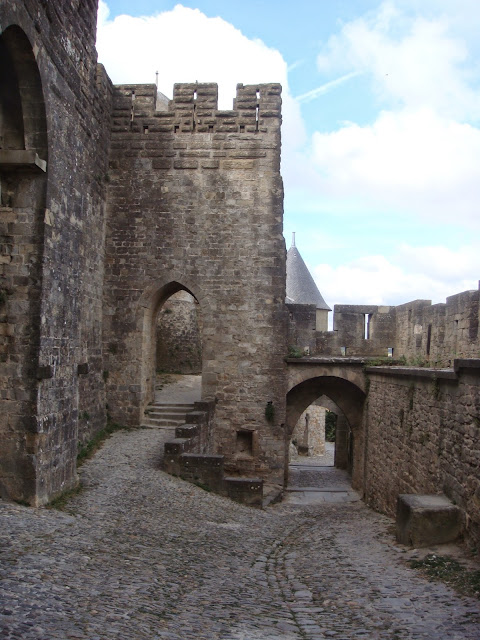 Entering to town it is a maze of  narrow cobbled streets that are lined with shops and bars. Place Marcou, near the Porte Narbonnaise, is crammed with colourful umbrella covered tables from the bistros that were setting up for lunch. 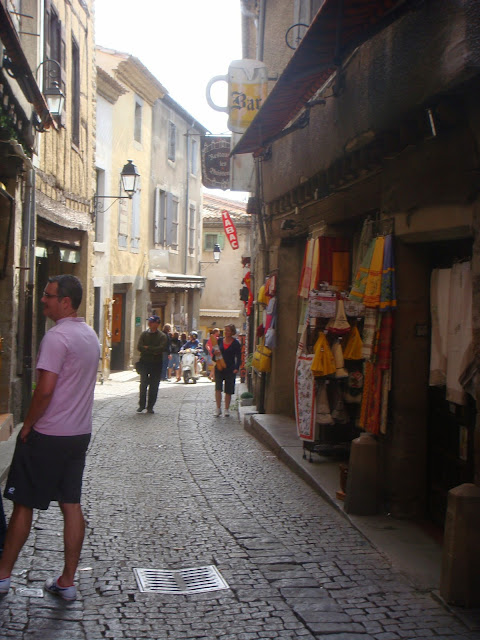 On the southern end of the town stands the Basilica Sainte-Nazaire et Saint-Celse, that could trace its foundation back to 925, rebuilt in its current Gothic style between 1269 and 1330. Elements of its earlier Romanesque style is evident in its vaulted nave, while stunning stained glass windows light the interior and gargoyles guard the exterior. 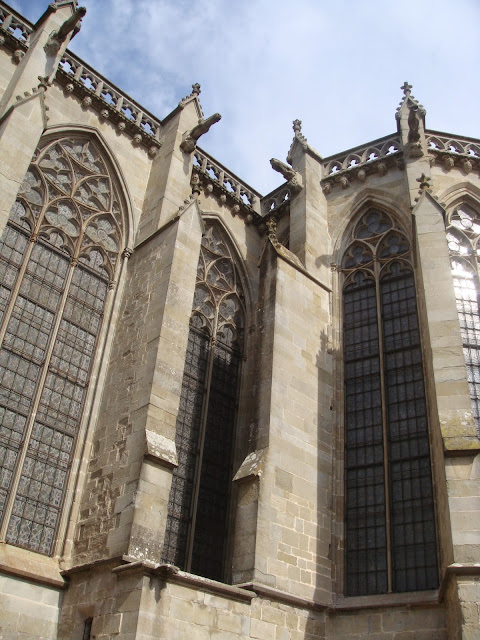 On the western face, overlooking the river and the approaches to the Barbican, stands the Donjon of the viscount. Commenced in 1120 and remodelled in 1229 this beautifully preserved castle features courtyards, chambers, a chapel and a museum. From the ramparts the view across the tiled roofs of the town and of the surrounding countryside is superb. 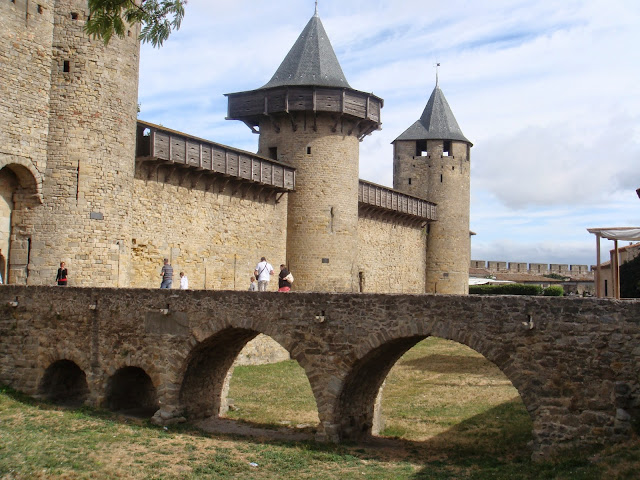 The entrance to the Donjon 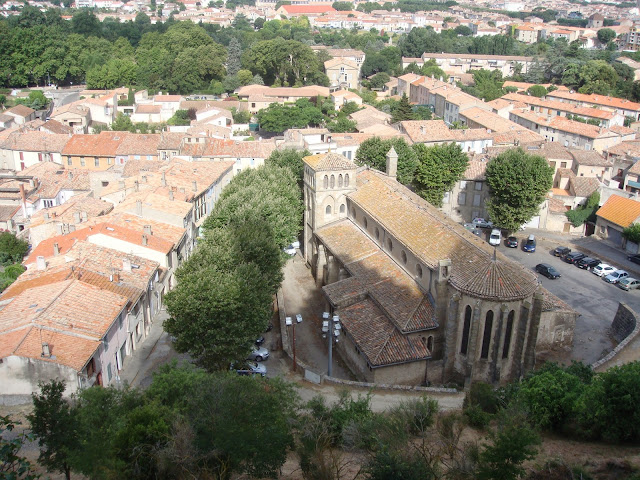 The view from the ramparts with Saint Gimer in the foreground 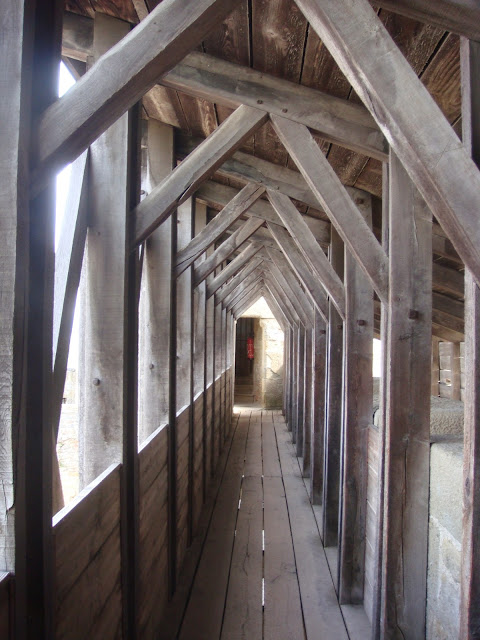 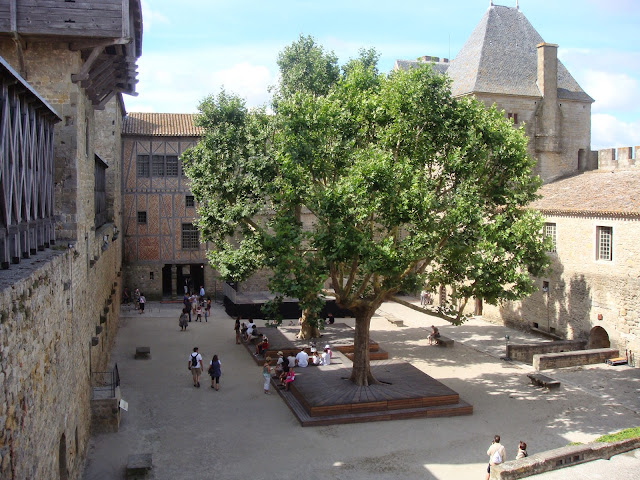 The interior of the Donjon

I had a nice bit of lunch in one of the bistros, at a much lower price than I was expecting, and washed it town with a couple of glasses of rosé while sitting in the sun (not bad considering there had been a high percentage chance of rain forecast) before making my way back slowly through the old town (although being a Sunday there was not much open) to the train station where I took the 3:30 train back to Toulouse, arriving there at around 4:40.

It was an easy and pleasant way to pass the day. It is starting to cool down now and tomorrow is a busy day, so I think a cassoulet is called for tonight.