Today, the 152nd anniversary of the battle,  we refought the First Battle of  Bull Run, or Manassas.
The Union Army
Hunter's Division: Porter's and Burnside's Brigades, with two batteries
Heintzleman's Division: Franklin's, Willcox's and Howard's Brigades with two batteries
Tyler's Division: Sherman's, Keyes' and Schenk's brigade with one battery
The Confederate Army
Army of the Potomac: Bonham's, Cocke's, Evans', Early's Briagdes, along with three batteries and the Hampton Leigon
The Army of the Shennandoah: Jackson's, Bee's, Bartow's and Smith Briagdes, along with three batteries.
The Game
The game assumed that McDowell executed his turning movement as planned and started with Burnside facing off against Evans on Matthews' Hill. Bee and Bartow's brigades are marching to Evans' aid. Porter's Brigade is crossing Bull Run in support of Burnside.
Burnside attempted to flank Evans but struggled to get going. Not until Porter was able to come up on Burnside's left, could Evans be forced back, by which time Bartow and Bee  had formed a solid line behind him. Jackson had by this time arrived and formed on Henry House Hill. Cocke's Brigade came up on Jackson's right. 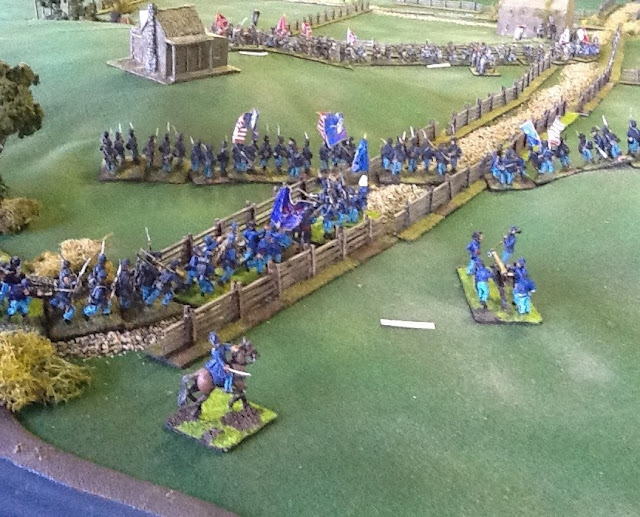 Burnside faces Evans, with Bartow and Bee forming to the rear. Porter follows Burnside across Bull Run.
The Confederate line stabilised in the low ground between Matthews' and Henry House Hills, while Heinztleman's Division came up and formed to the right of Burnside. 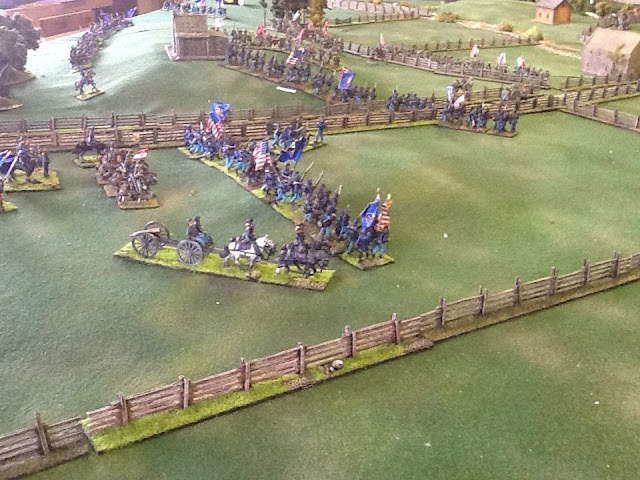 Heintzelman forms on Burnside's right
With a sudden rush Porter attacked and dispersed Bartow's brigade while Sherman's Brigade, with Keyes in support, moved to flank the the Confederate line in the low ground. Evans swung back to face Sherman, while Jackson and Cocke came forward. Sherman was forced to face Jackson.
Meanwhile Kirby-Smith's and then Early's Brigades extended the Confederate left, overlapping Heintzleman. The Union advance stalled. Burnside's Brigade was caught in a vicious crossfire and began to retreat. Franklin's Brigade was similarly engaged, but managed to hold its position for a turn.
On the Federal left Schenks' Brigade finally arrived at the stone bridge and  prepared to cross, covered by Carlisle's battery. Things were beginning to go badly for Sherman and when Jackson opened a heavy fire, Sherman's brigade melted away. 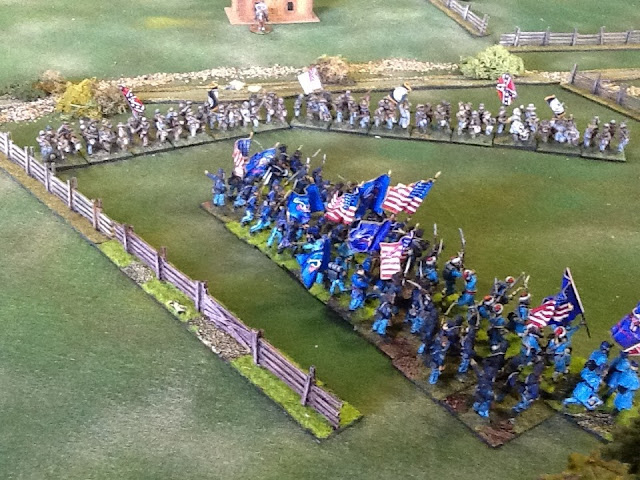 Flanked by Jackson, Sherman takes heavy fire
Porter, in an attempt to ease the pressure on the Union left charged forwad and drove back Evans, but when he attempted to drive off Jackson, he was halted and then driven back.
Keyes' Brigade, assisted by Schenck attempted to cover Sherman's collapse, but they were caught by the arrival of Bonham's Brigade and were driven back by a concerted attack by Cocke and Bonham. 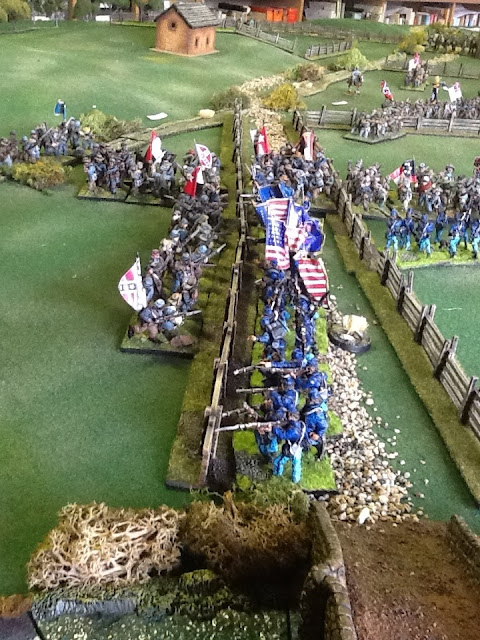 Bonham and Cocke roll up Schenk and Keyes
On the Union right Willcox's brigade charged Early and despite an initial success failed to drive him off. At the same time Howard's brigade was caught in a fire between Bee, Smith and three Confederate batteries, and gave ground.
The whole Union army was in retreat and the game ended, much the same way as the original battle ended.
Posted by Mark Strachan at 19:56