A Smorgasbord of Items

A big post today because quite a bit has come off the painting table this week, some new and some just finishing off units. This is also my 300th post.
First up is regiment of French cuirassiers for 1812-1813, the First Regiment to be precise. this will be the first of four heavy cavalry regiments (two cuirassier and two carabinier). They are all Perry plastics. 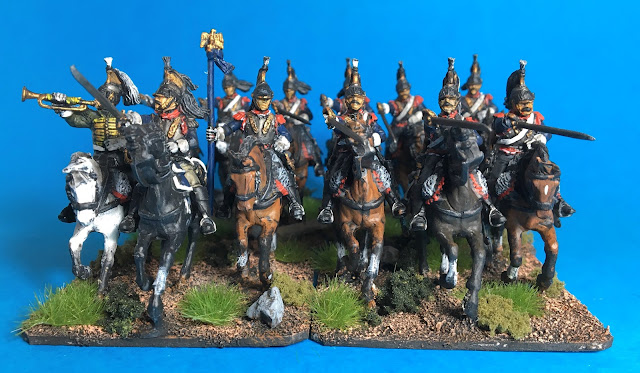 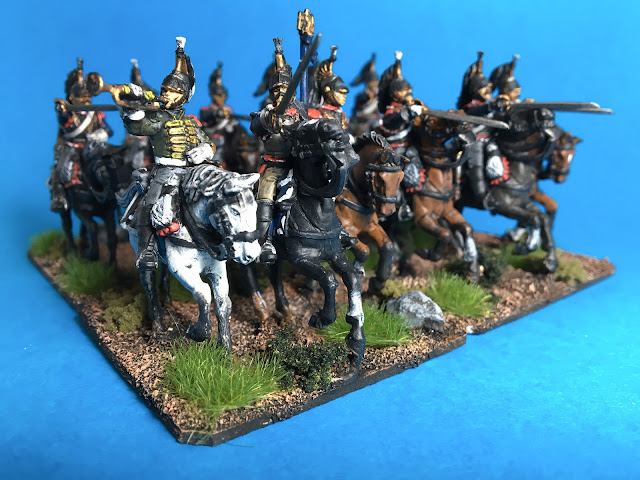 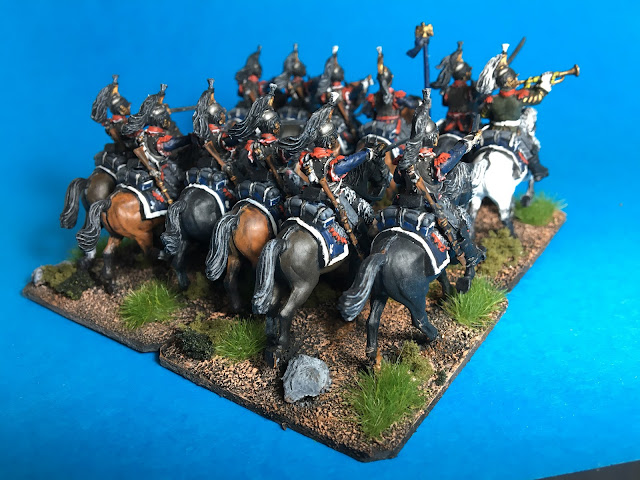 Another Perry plastic unit that marched out of recruitment hall and into the barracks is this line infantry battalion for 1812-13. 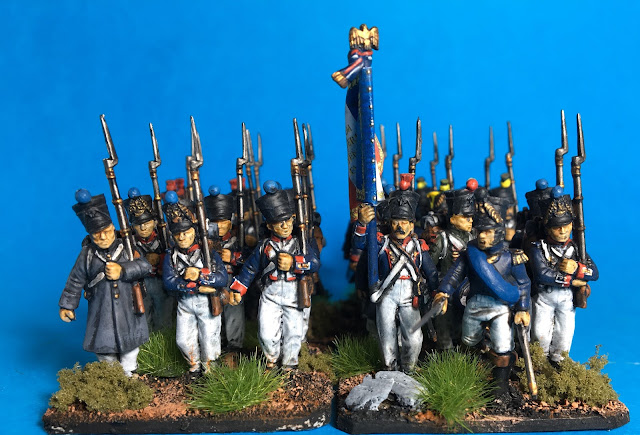 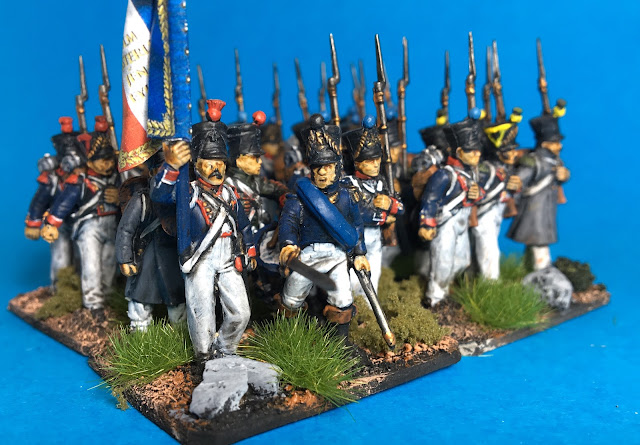 The plastics were bought to fill in any space in the painting schedule for other projects...in this case the gap between shipments of the French in Egypt. That gap wasn't open for long...a mere four days between the completion of the dragoons and the arrival of the next batch - two orders actually in three parcels. And what a bunch it is too: 11 battalions of infantry, two cavalry units, another two guns, crew and limbers, some dismounted camel holders, some colonels and a few plastic command sprues.
A third Perry plastic item completed this week is the North American store. This is intended for the War of 1812 project, but has a broader application. Eventually there will be two more plastic buildings for this project, the farmhouse and the church. 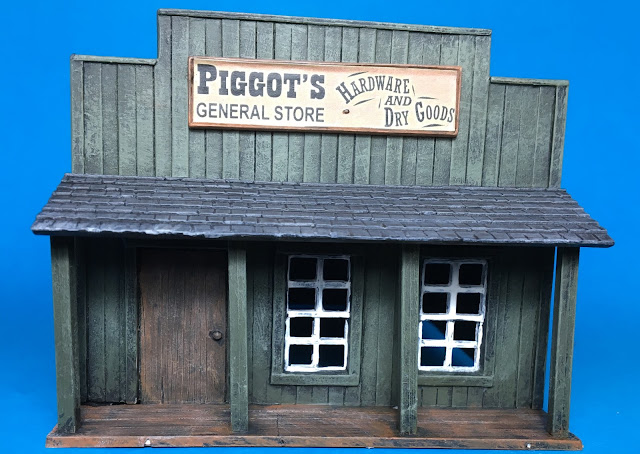 Now the more astute readers amongst you will recognise the name of this particular retailer from the sign above the door: Piggot. This was the name of the retail outlet  that featured on these pages in February (see the construction of Piggot's African branch) and subsequently appeared in the WWI East Africa game played in October. 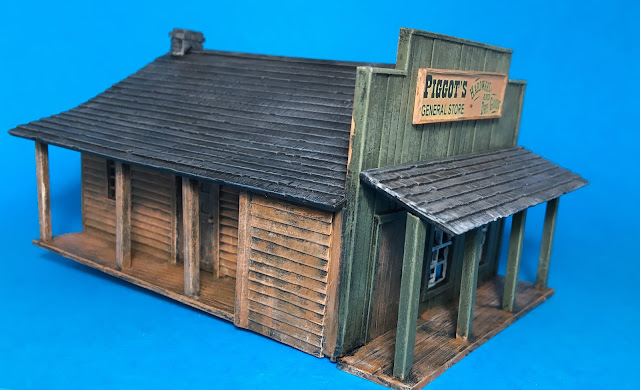 It is not commonly known, but the Piggot family is well known in the 19th and early 20th Century retail trade and it all started with this North American connection. Ebenezer Piggot emigrated  as a young man from Yorkshire in 1765 and established this trading post on the Niagara River 1789.
It seems that the Piggot family was destined to attract trouble and war surrounded their enterprises wherever they went. In the War of 1812 Ebenezer and his family was compelled to hide in the cellar while bullets riddled their store. His son, Nathaniel, had seen an opportunity in Texas in the 1830s and established his store near the Mexican border where it was at the centre of skirmishes in the early stages of the Mexican War. Nathaniel’s son, Horace, had established his own retail empire at Sharpsburg in Maryland only to have his premises used as a military hospital after the Battle of Sharpsburg in 1862. 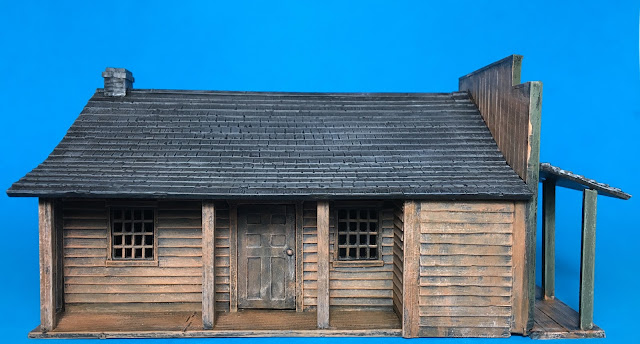 Horace’s second son,  Ulysses, set up shop in Tombstone Arizona in the 1880’s, where his store was twice raided by the Apache. Ulysses’ son, Bob, tired of having the family dragged into all of these conflicts and quit the American continent in 1893 established a trading post in Zanzibar, but soon relocated to the town of Kisumu on the shores of Lake Victoria. There he lived prosperously and peacefully until one day in early 1915 when several hundred German Askari descended on the town and burned his store to the ground. 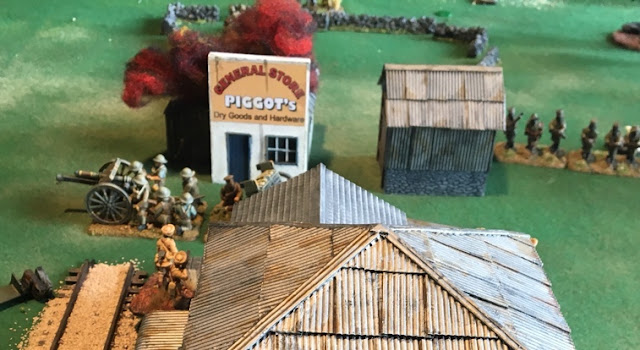 With that Bob turned his back on retailing, left Africa and established a highly successful publishing business in Philadelphia. For the next forty years he published “Piggot’s Almanac” until his death in 1957. With no male heirs the  Piggot family name died with Bob.
All of this is a complete fabrication of course. I was struck in a traffic for ages on the way home on Friday afternoon, thanks to a rail strike, on a hot day and I had left my iPod at home. So rather than listen to inane prattle of drive time radio I let my imagination run and this story is the result.
Next items off the painting table are two units from the French in Egypt project that were left incomplete a couple of weeks ago. These are the first and second battalions of the 88e Demi Brigade de Battaille. The former in the violet coats and the latter in crimson. The First battalion was completed by the addition of the mounted colonel, who I dressed in the correct crimson coat (my assumption being that the senior officer would have had access to the correct cloth early in the uniform manufacturing process), while the Second (crimson) battalion was completed with the addition of the command group and another two fusiliers. 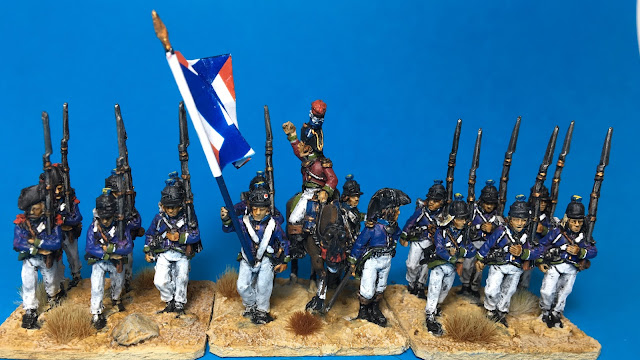 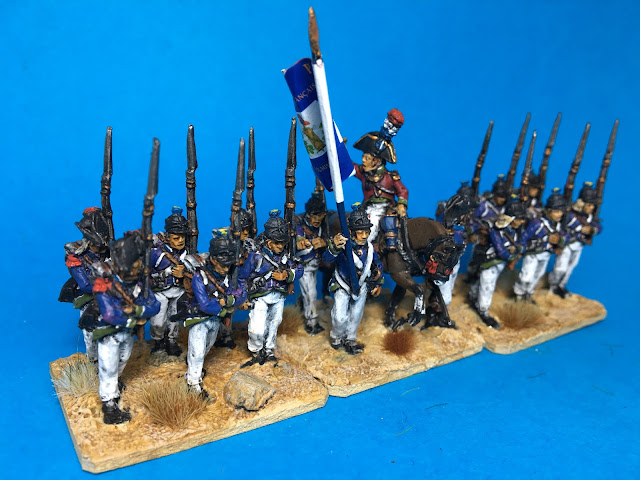 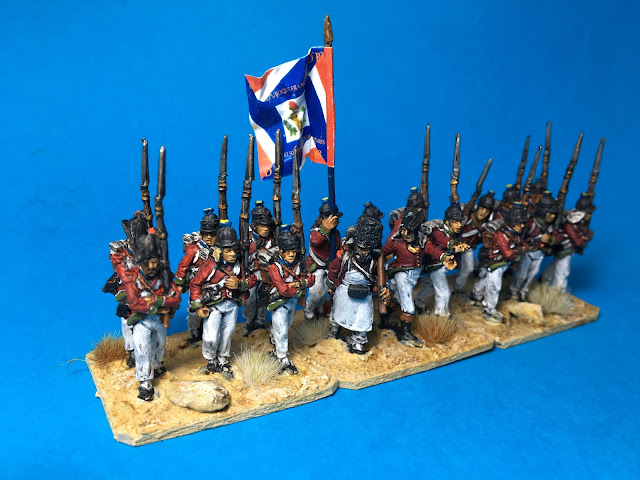 Finally there are the camels for the dismounted dromedary troops, with their guards. Originally I was going to mount these as three separate stands, but in the end decided on a single base. I am pleased with that choice. 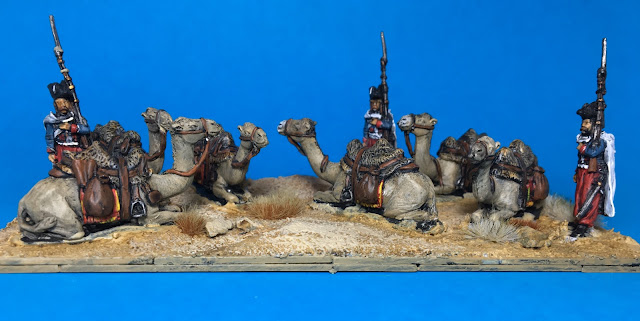 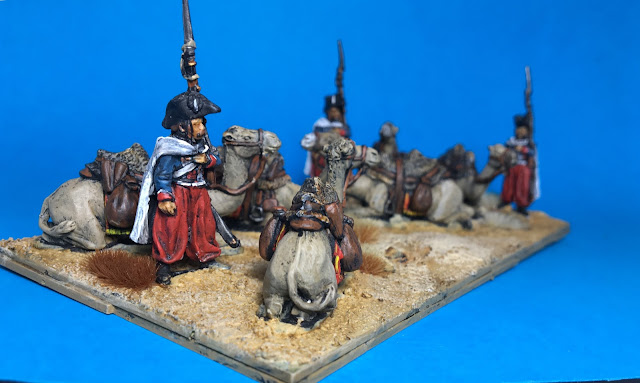 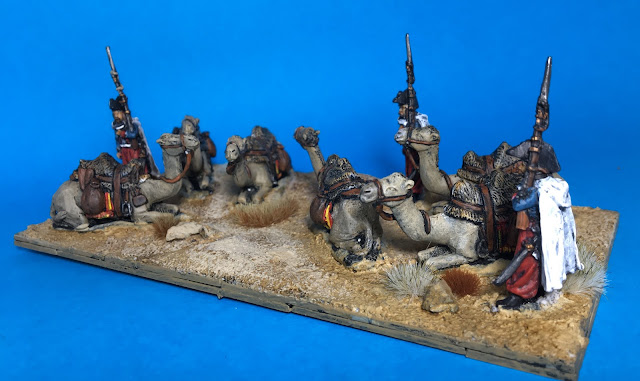 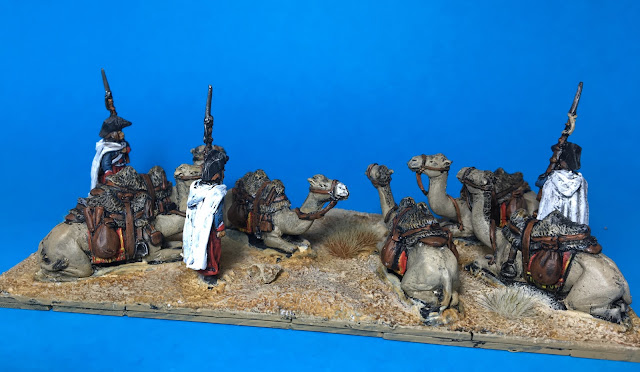