Apparently there was a brilliant sunrise on Sunday morning, not that I saw it, but by 8:00 it was raining. However the rain did not last long by the time we had finished breakfast it had cleared (although another rain shower came through a little after 9:00).

I ran the final game of the week and had kept it a surprise until the night before. I had long been attracted to the Perry Miniatures Retreat from Moscow range and had concieved a game based on the Pony Wars rules that came out in the 1980s. 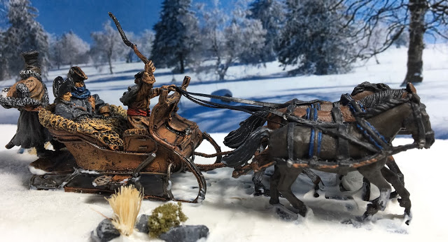 So after I got back from last year's Tarawera event I began planning. Readers will no doubt remember the collection of the Perry range and winter buildings that I built up earlier this year. These were all bought or made for this game.
So the details of the game...

The French units are retreating along a road that weaves its way along the length of the table, passing woods, farms and villages until it crosses a river at one end of the table. The objective of each player is to get his unit across the river without losing more than half of his strength.

As the French units march along the road they are liable to encounter Russian troops. There are a five trigger points along the road and as they pass in line of one of these the French will draw an event card that will declare whether any Russian troops arrive on the table and then, if they do arrive, a die is rolled and the Russian unit will arrive at one of four possible arrival points. If a Russian unit cannot arrive at the designated point, because access is blocked by a French unit, it will displace 500mm towards the river.

Russian troop movements are programmed and depend on the strength and proximity of the enemy, but generally speaking units that are in good order will always try to engage the French.

The terrain is snow covered but good going for troops on the road. Off road it is difficult going for infantry and cavalry, but normal for sleds.

In this game the forces are:

At the beginning of the game the French are deployed on the road with the cavalry in the front, with the sleds to one side and then the infantry.

A card is presented to each player that defines their command and the object of the game. 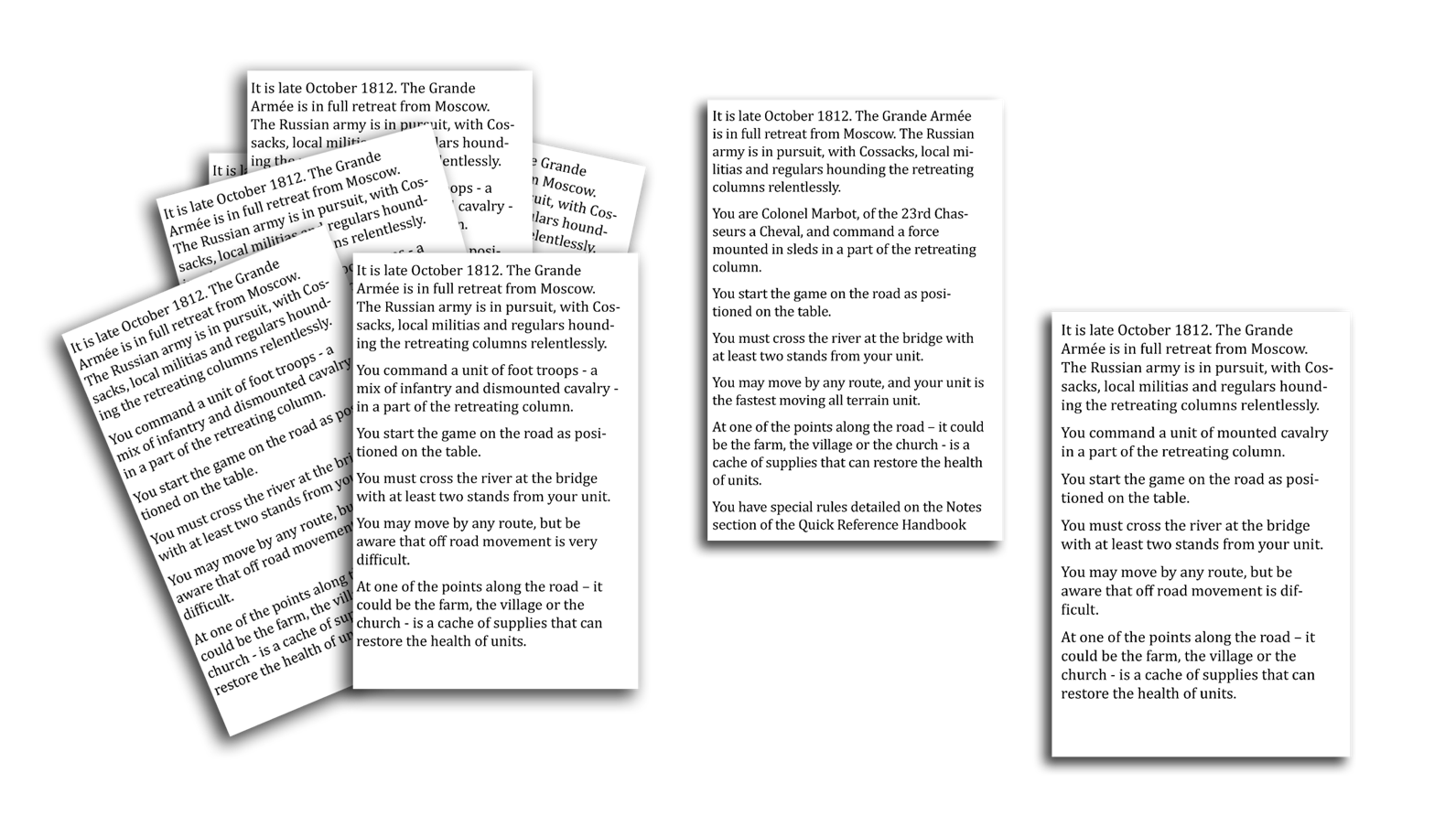 No Russian troops are deployed initially, but on Turn 2 the line infantry will appear on the opposite bank of the river near the bridge, and may not cross the river unless the Emperor rule is envoked (see below).

As the French troops pass a trigger point a card is drawn and the entry point decided by a matrix within the rules.

A number of blank cards are included in the deck. 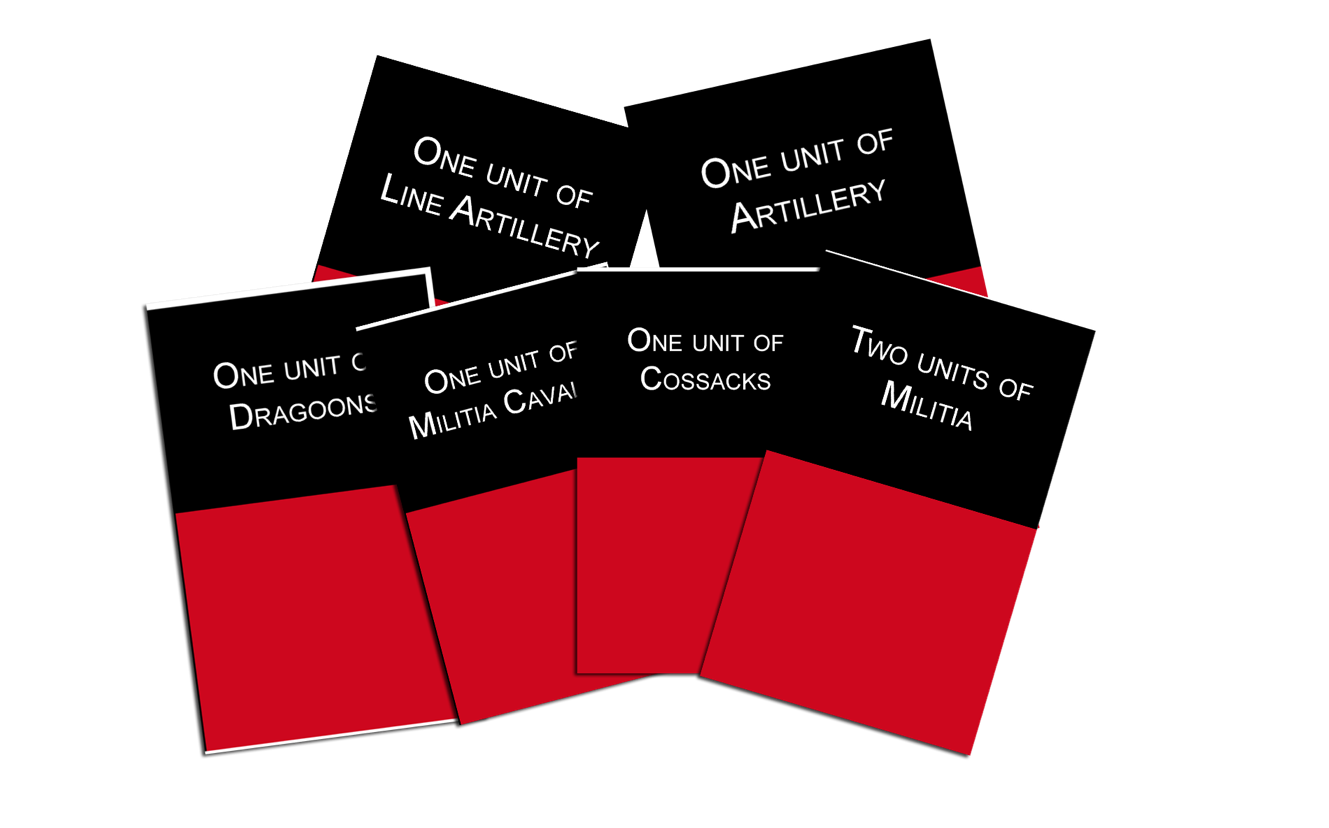 The Pony Wars rules were to complex for what I wanted so I adapted my Napoleonic rules. In this game the French troops would be the equivalent of the US Cavalry in the original set and are pretty much free to do as they like, while the Russians are programmed like the Indians in the original and harass them all the way.

A full copy of the rules is located here.

The table was set up at 4 meters long and 2 meters wide. The map, with its trigger points, is as below - T = Trigger Point, A = Russian Arrival Point. French units that are not in rout can recover status by the following means:

Players are told that a special cache of supplies is located somewhere on the table that can restore up to eight status points on damaged units. Once the cache is found these points can be claimed by any unit as they pass within 50mm of the cache.

But the cache is a ruse. Instead in the centre of a village is a special trigger point that represents the Emperor and an escort of Imperial Guard troops. This force will be remain hidden from view until a French unit moves within 300 mm of the marker. At that point the Emperor and his escort are placed on the table.

The appearance of the Emperor has a number of special effects:

Once a French unit moves within 100mm of the Emperor, he and his escort will set off along the road to the bridge.

How the Game Ran

The table was set up with a white cloth. The road was marked with a brown Woodlands Scenic railway ballast. The trees were ones I had made years earlier for a game based in the Battle of Pea Ridge.

I changed the map a little, removing the mill from near the bridge and moving the church nearer the river.

Above and below, The French in their starting positions. The cavalry leads the way with Marbot's sleds on the right. 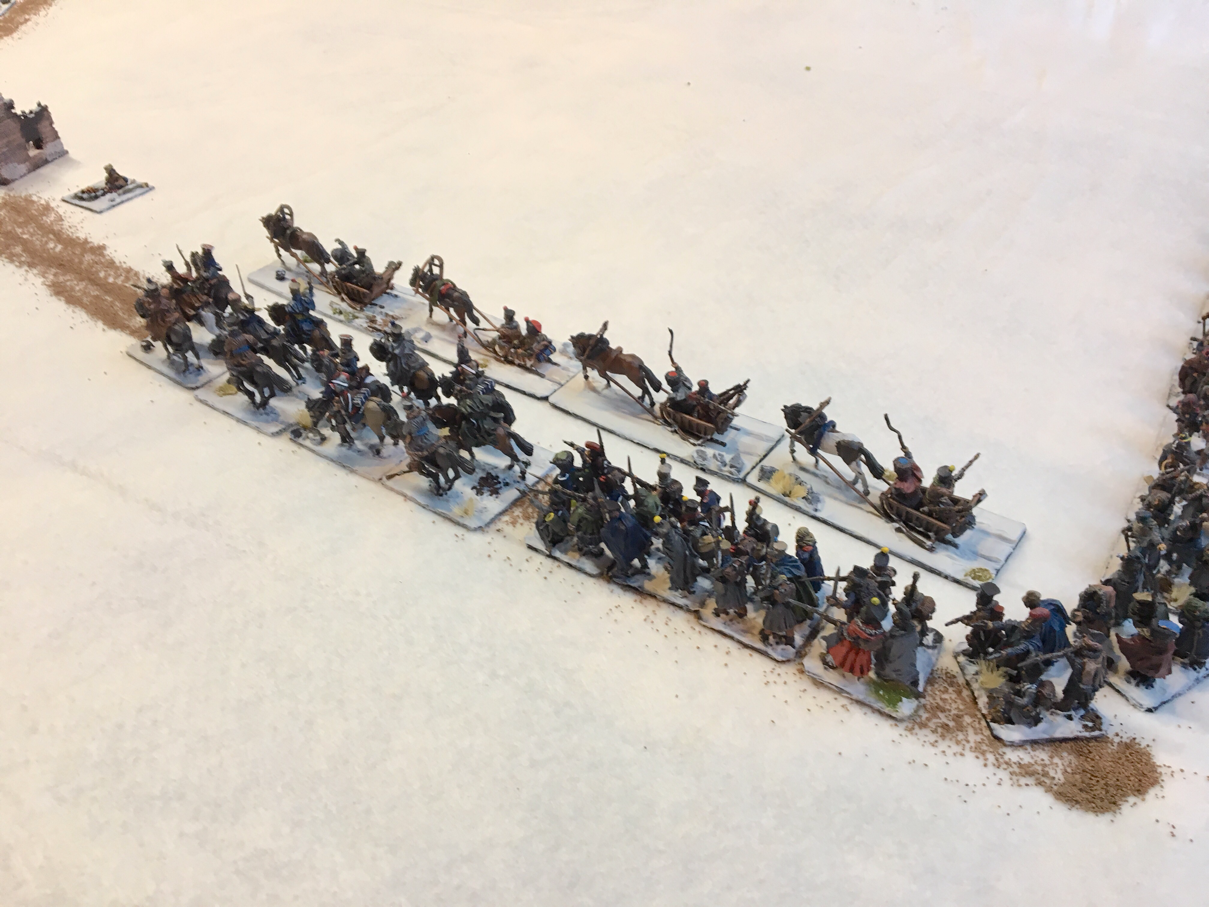 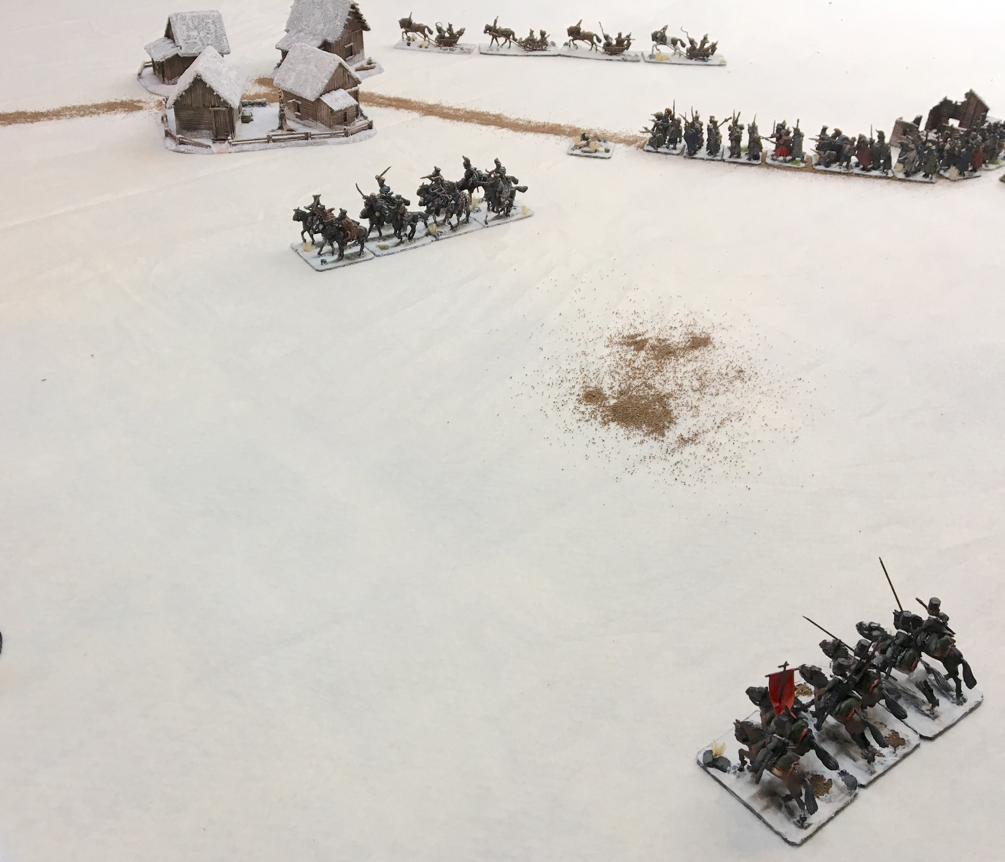 The first Russians arrive - a unit of mounted militia 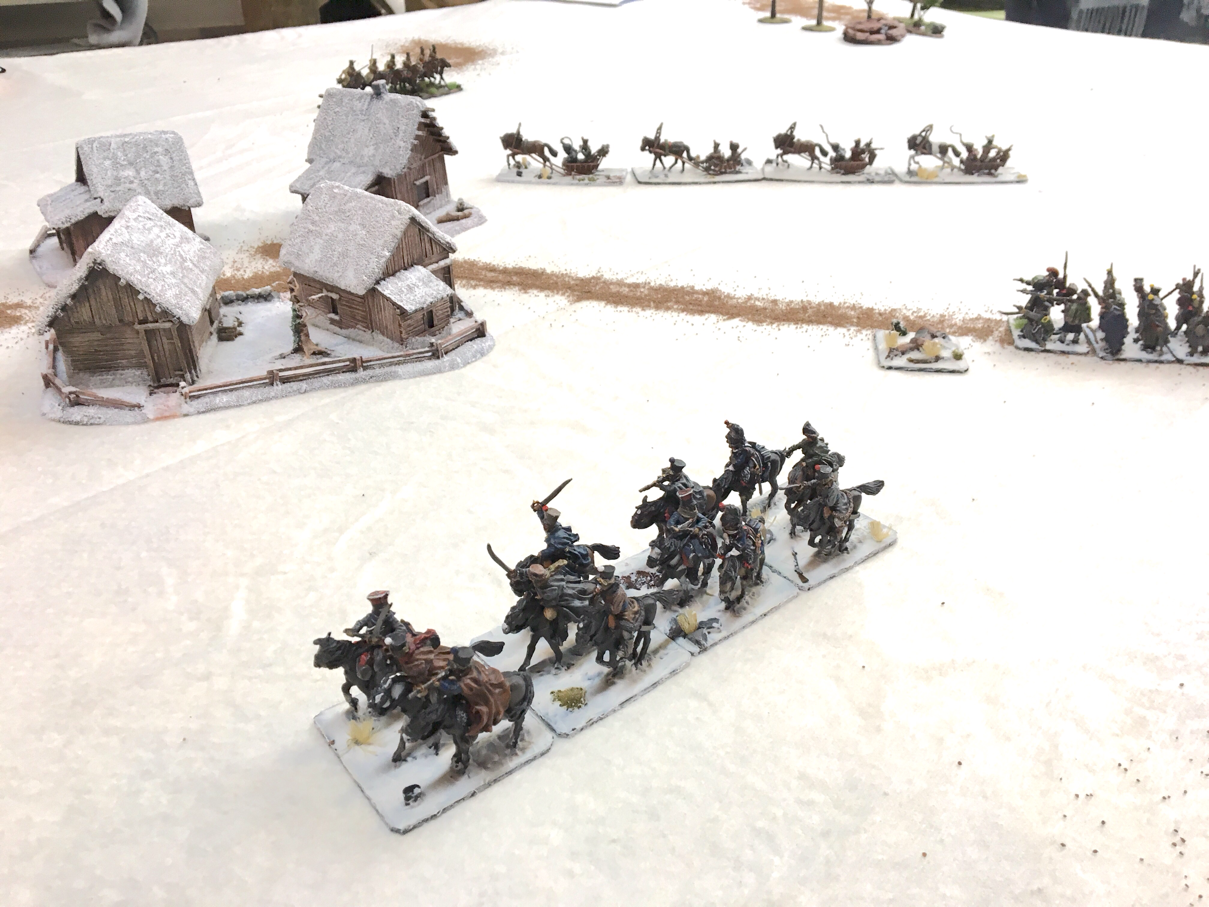 On the opposite side of the table some cossacks arrive and Marbot's sleds move to intercept. 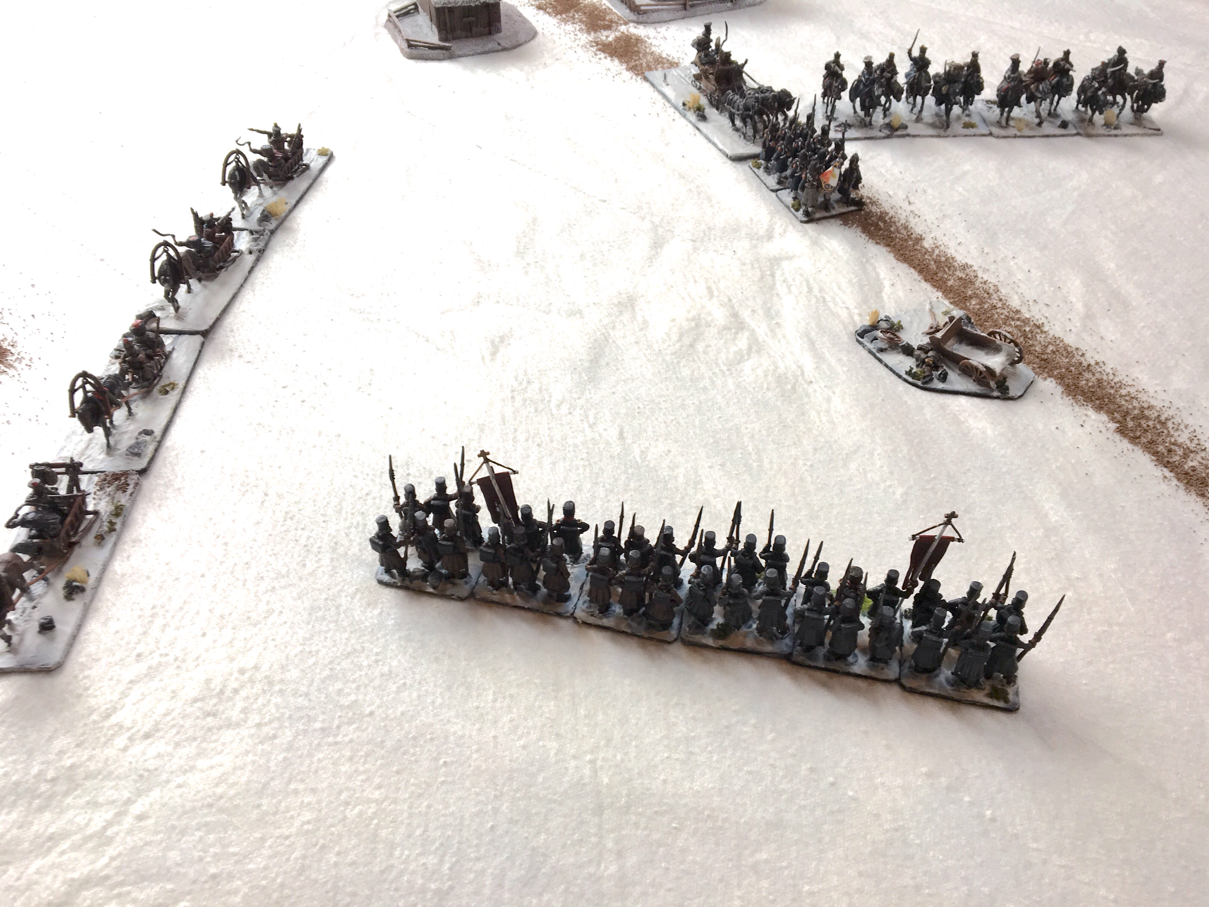 The Emperor has been discovered and sets off down the road. 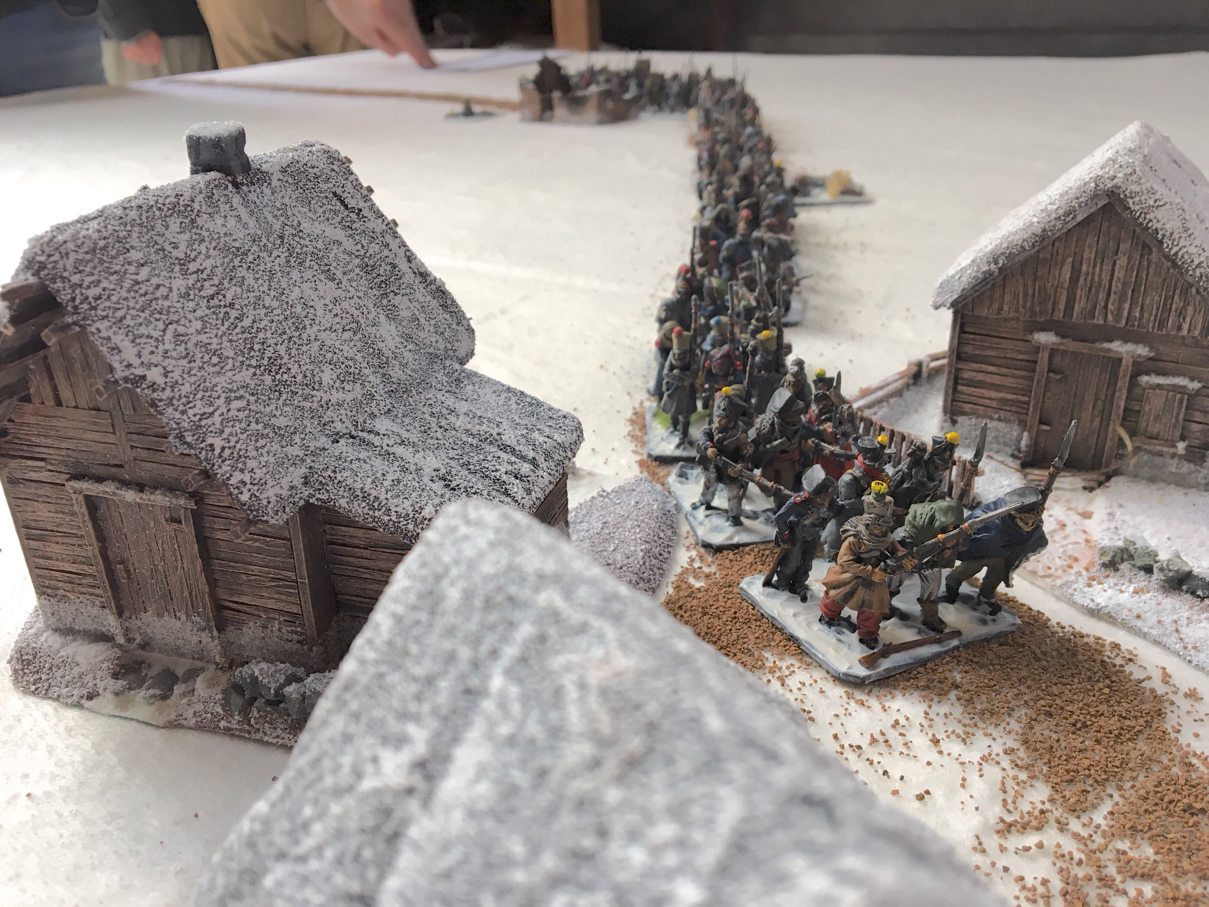 The infantry column enters the village

The Emperor is well protected The Russians are coming in from all directions.  A unit of militia has even had the audacity to charge the Emperor's escort - and nearly beat them! Near the church the action heated up. 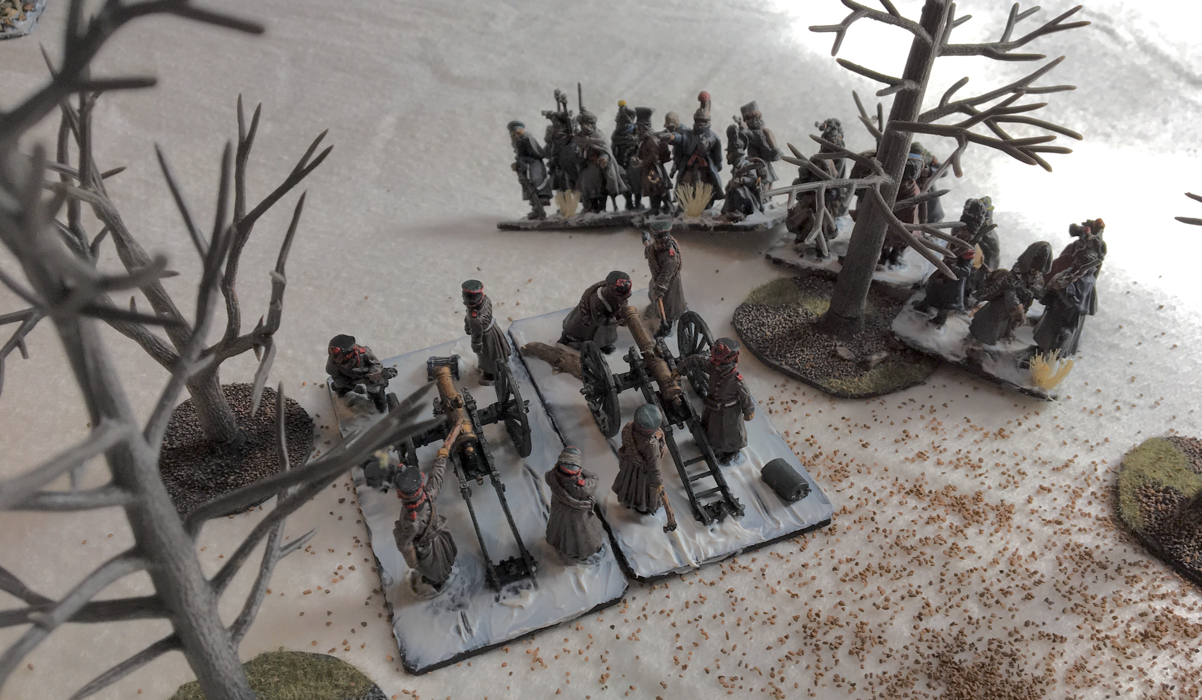 A Russian battery emerged from the wood and opened fire on the Emperor's sleigh, causing some damage, before one of the infantry units drove the battery off. The Russians are everywhere... The fighting rages all around the Emperor 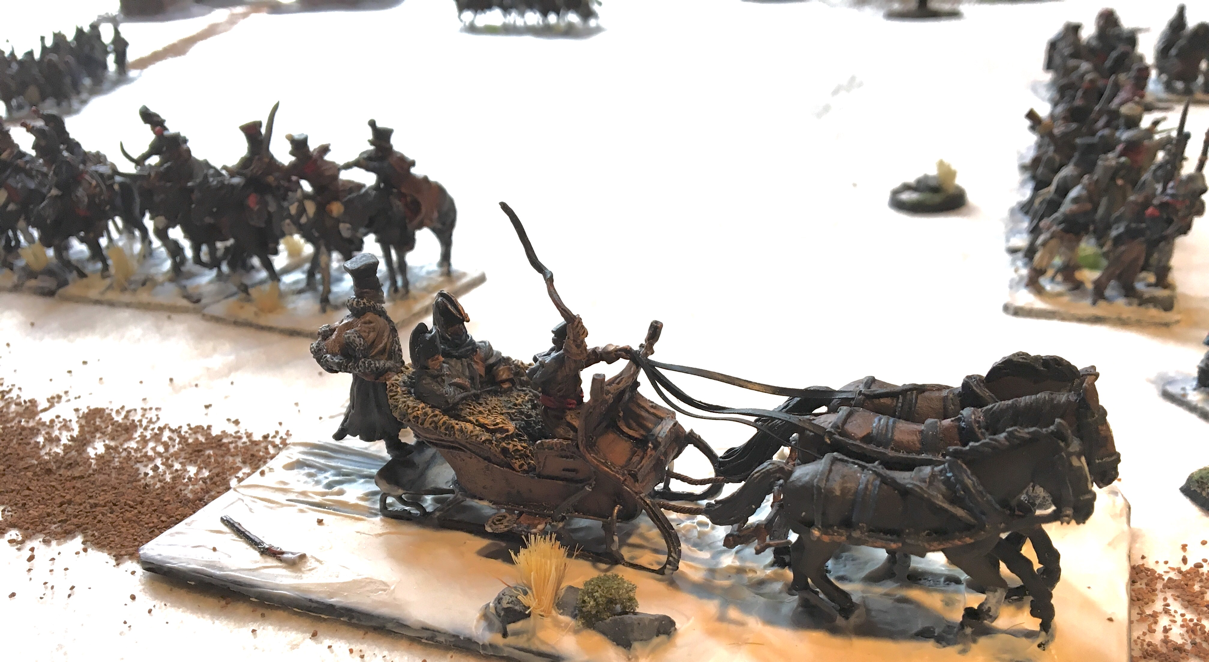 But he is well protected and makes it safely across the bridge!

And so our fantastic week of gaming was over. We packed away the table, put everything back in the garage that we had moved to make space. We packed the cars, had a light lunch, cleaned up and closed up the house.

Just before 1:00 we hit the road and had a easy drive home...that is until we hit the motorway into Auckland that is and we crawled along taking twenty minutes to travel two kilometres until we passed a small fender bender...welcome back to Auckland.

The planning for next year has begun.