I have dozens of wargames buildings. So many, in fact, that I am running out of storage space.

I have buildings to cover the Dark Ages, Medieval, English Civil War, pretty much the whole gambit for European warfare from 1700 to WWI, plus more for the North American and African theatres.

But all the recent work I have done with troops in winter kit has made me realise that all the structures I have are for summer use.  With the prospect of a Great Northern War project on the 2018 horizon I have decided that I need some relatively generic Russian/Scandanavian hovels in snow conditions.

So I set about to determine what I wanted as an end result. I wanted these buildings to represent what I see as typical of rural village in  Northeastern Europe probably from 1700 right through to the early 20th Century. The need to be small and rustic and covered with snow, but not looking like a picture from a Christmas card.

My first task was to search the internet for images of Russian rural structures. Thankfully there are many images on the web, more often from the 1920s, but also some from the turn of the 20th century. Since I seriously doubt that the style and construction of these had changed at all in 200 years, these formed the basis of my inspiration. I can’t post all of the images here because some are protected by copyright, but these three images give a pretty good (and grim) idea of what a village must have looked like, with lots of wooden structures, some of logs and some of rough-hewn timber, with thatched roofs, arranged in a fairly chaotic way (apart from the last image below), each with a small fenced area. 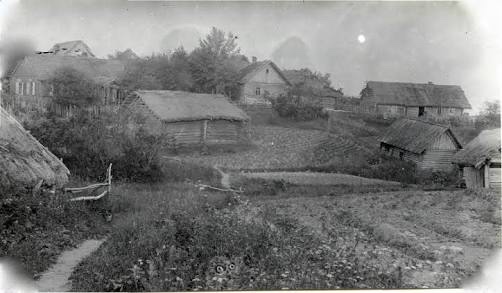 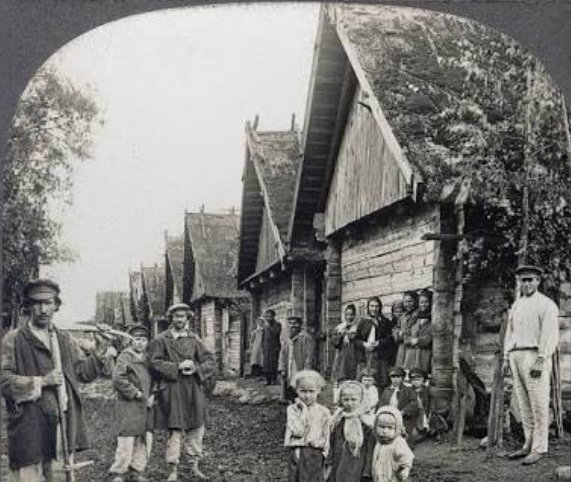 I also like the effect and simplicity of my recently made Dark Ages buildings, where I used cardboard forms covered with matchsticks. With that in mind I decided to make a first test model.

First I cut the four sides from heavy card and, because I want a bit of an overhang in the gable, I made the gable a double thickness, hence the additional triangles in the image below. 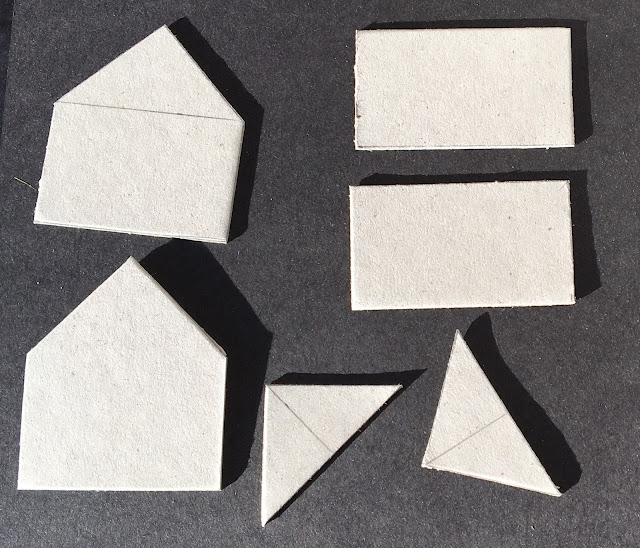 The next step was to fix the matchsticks to the surface. I decided to do the base levels as horizontals and the gables in verticals. I glued in place seven matchsticks for the doors and cut small uprights for the window frames, then I laid the other matchsticks in place. The door frame and the window lintels and ledges were glued in place next. Many of the matchsticks extended beyond the edge of the card, and I just left them like that until the glue was well and truly dry and then trimmed them off with a very sharp blade. 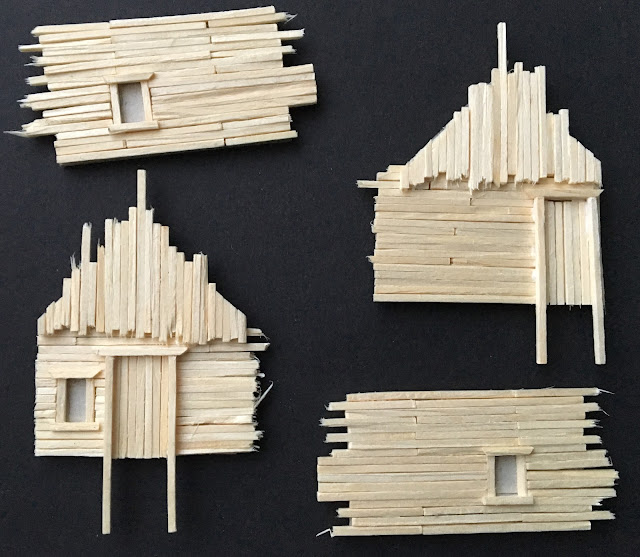 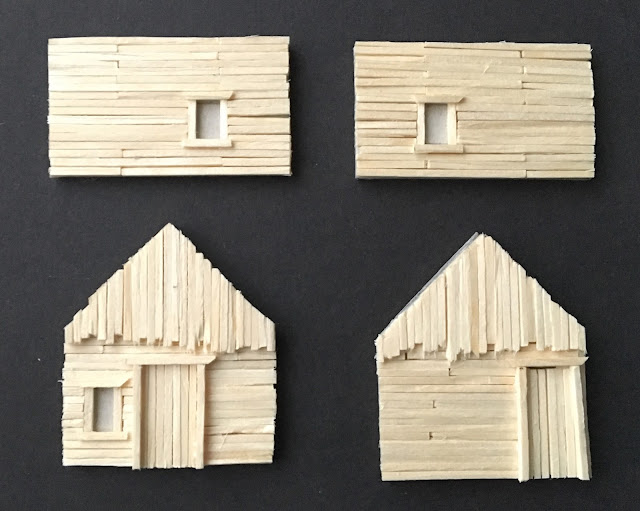 The base structure was then glued together, with cardboard right angled triangles glued into the corners for strength. 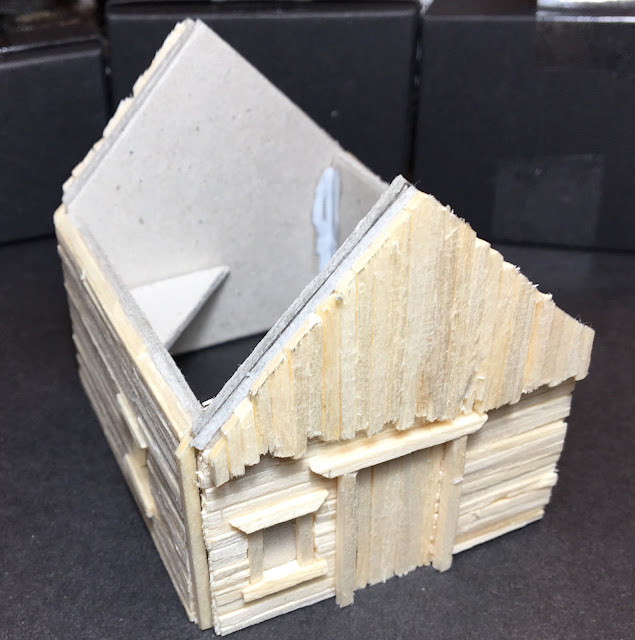 Next the roof was cut fromcore board with one side of the card cut away to expose the foam. The foamcore board was then fixed to the structure. 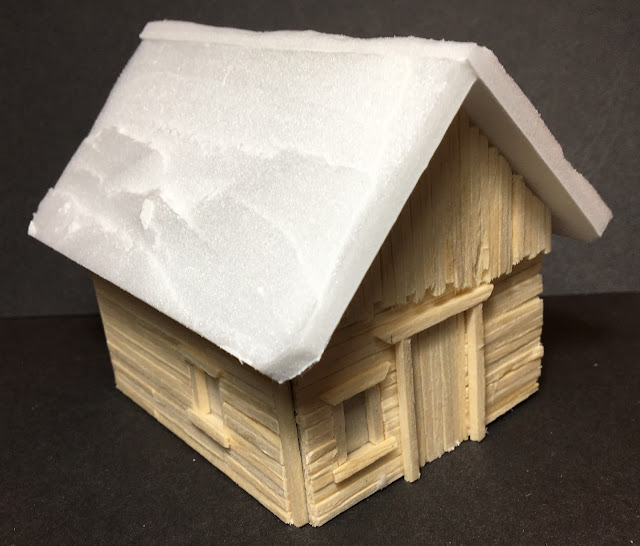 Once the glue for the roof was set the reason that one face of the card was removed becomes clear, because now I can carve the foam into the shape I want for a snow covered roof. I carved some smooth but irregular edges. I also sanded some of the rougher areas to smooth then out a little.

Then to provide some more texture on the roof surface I coated it with PVA glue and applied a very fine sand, the purpose of which will become apparent soon.

The next step is to paint the model. First I undercoat the base in black, and the roof brown. Then the top coat is applied. The base woodwork is painted brown, then drybrushed with three lighter shades of brown until the surface is almost grey. Adding a touch of yellow to one of the drybrush coats adds a little depth here and there. 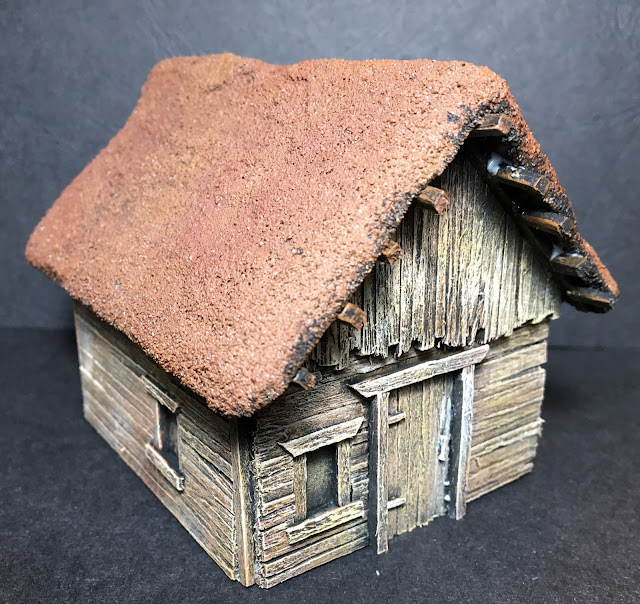 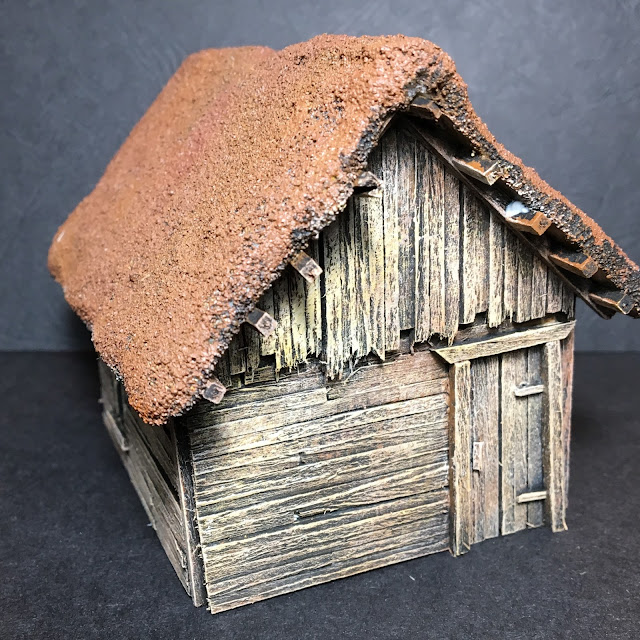 The roof was drybrushed with six layers of white, with a hint of the brown undercoat showing top provide a bit of depth. 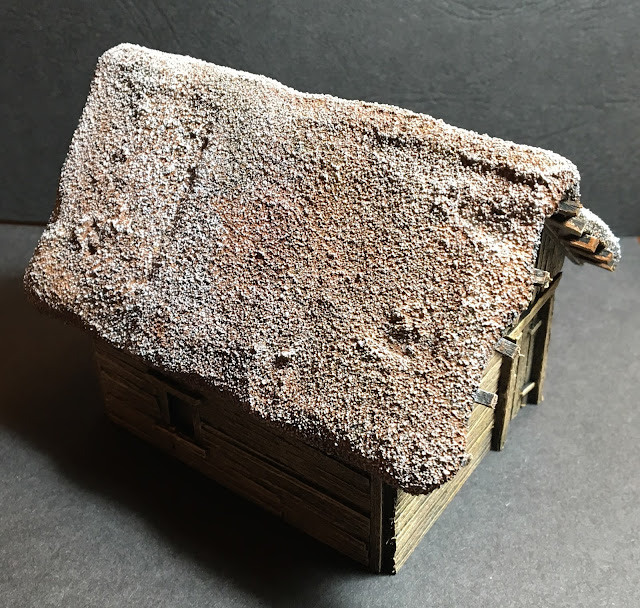 The first coat of while applied over the brown

The final touch for the basic structure was to add some snow to the lower parts of the base structure, where the wind has blown it against the building, and along window ledges and door frames. For this I used a piece of foam rubber that was pressed into PVA and then “padded” against the surface. Some Woodlands Scenics snow over I was then sprinkled onto the surface. This padding technique is important otherwise the glue shows through the snow and degrades the effect. I repeated this process a couple of times until the depth of snow seemed right. I may yet try this technique on the roof. 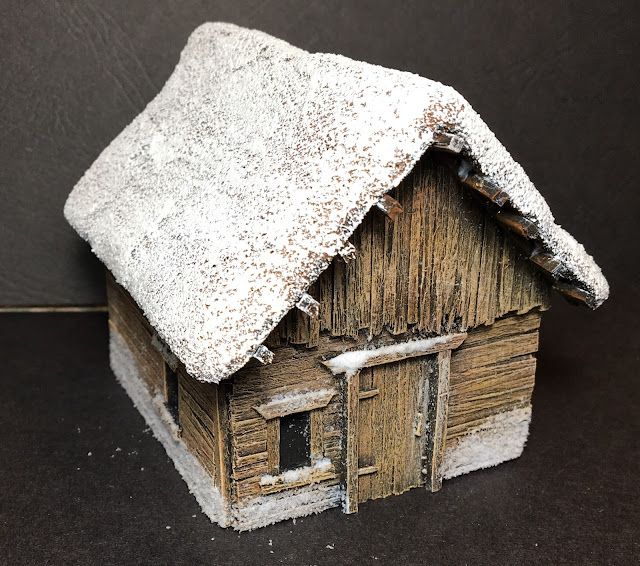 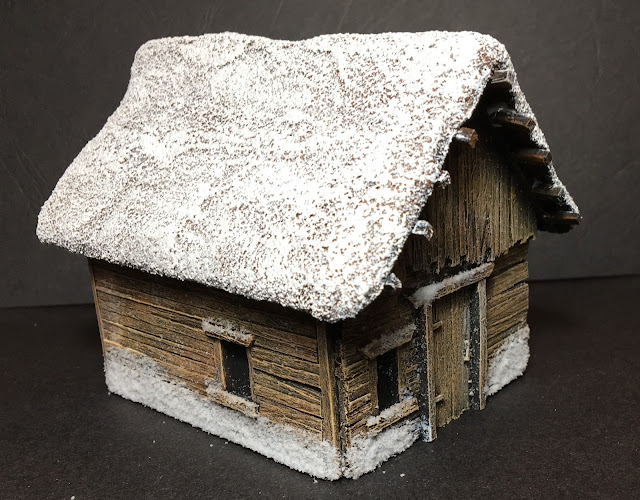 The building is yet to be fixed to a base, but I want to fix two or three to one base, in close proximity, so I will hold off basing these until I have a couple more made.