A Little Action on the Spanish Coast

Today we played a game to make use of my recently completed flatboats (joined by a couple of boats from another player)...an idea I have had for quite a while. The game was played with five British commanders playing against the Spanish controlled by me and one other player. All the Spanish responses were programmed. Here are the details of the game.

Narrative
It is 1803 and a Spanish flotilla has been raiding British shipping from a harbour on the Atlantic coast. The Admiralty has ordered that the Spanish threat is to be eliminated.

A spy was put ashore and he returned with this map.

The spy  made the following observations:


Horse Guards, expecting to face resistance from as many as 20 Spanish battalions, has committed a significant land force to the venture

The Navy will put you ashore and your objective is to capture the fort and destroy the guns. Each player commands a brigade as below:

Each player starts with the same number of command chips as the number of units in his brigade. Command chips allow him to assign actions to units.  Before the game starts he rolls 1xD6:

All boat Movement is starts from the corner of the table os the respective beach areas. Each move of a boat roll 1xD6:

In the fishing village
Cannot react until fired on or if British troops are within 100mm of the shore.

This force will attempt to defend against the landing, but if the number of British units landed exceeds their own strength, or as soon as any British unit that has landed on North Beach passes through the gap in the hills, the defenders will abandon the low ground and head for the ridge.

Camp near the Fort
Cannot react until first shot fired. This force will take one full move to form up the move immediately after being alerted and will move to support to the support of the force in the fishing village.


Camp near the town

Will dice for each regiment to form to react after Camp near fort activates:  1,2,3 one turn to form, 4,5,6 two turns to form

This force will attempt to hold the ridge and will not pass beyond the ridge except to pursue the enemy. Its whereabouts will be concealed from the British until line of sight is established. 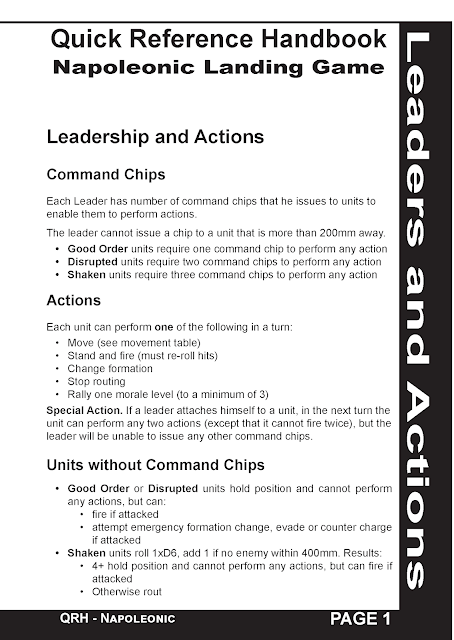 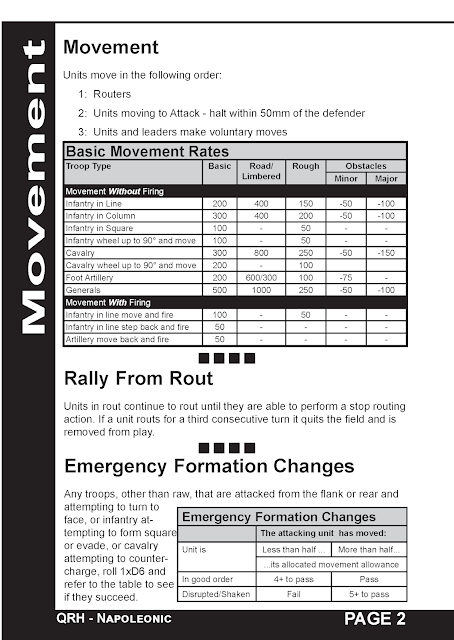 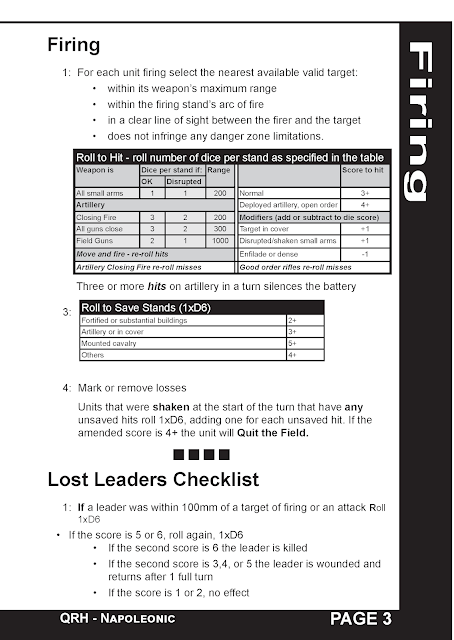 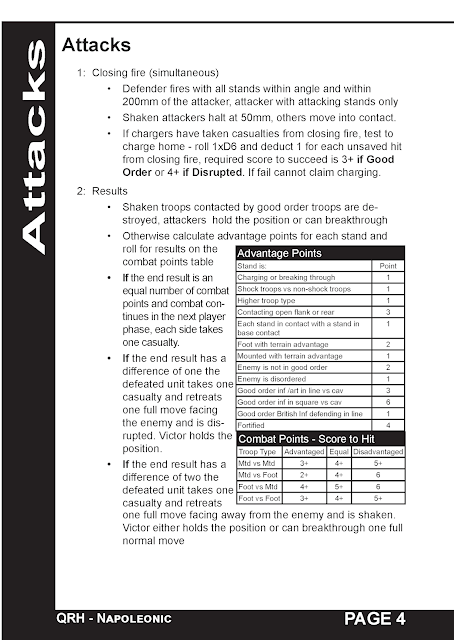 And so the action began.

The British Third Brigade and the Naval force head for the South beach... 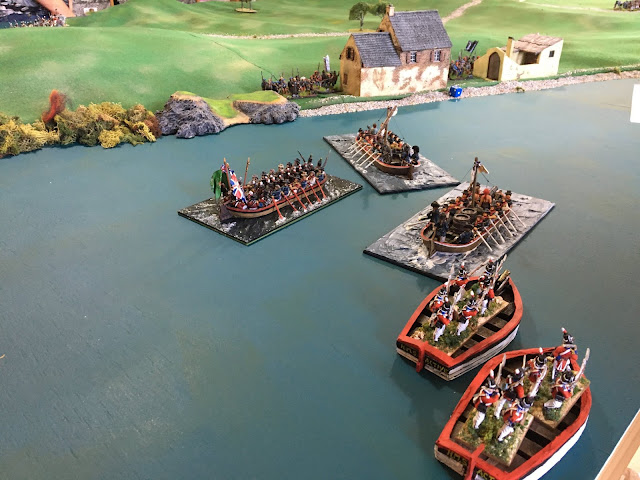 ... while the Second brigade lands on North Beach. 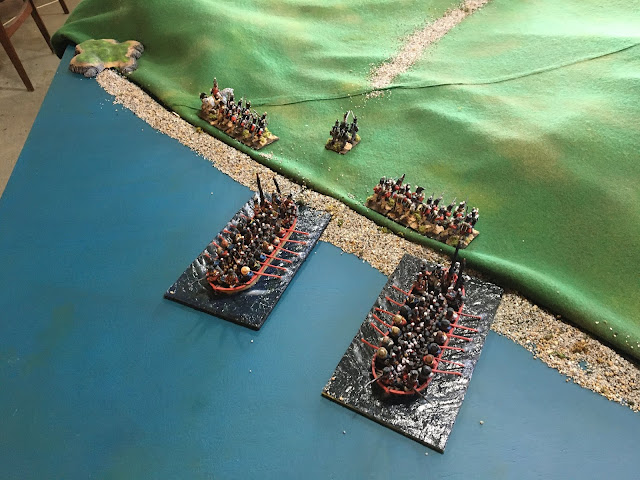 With the British Second Brigade passing through the gap  that carries the track from the North Beach, the militia began to withdraw from the fishing village. 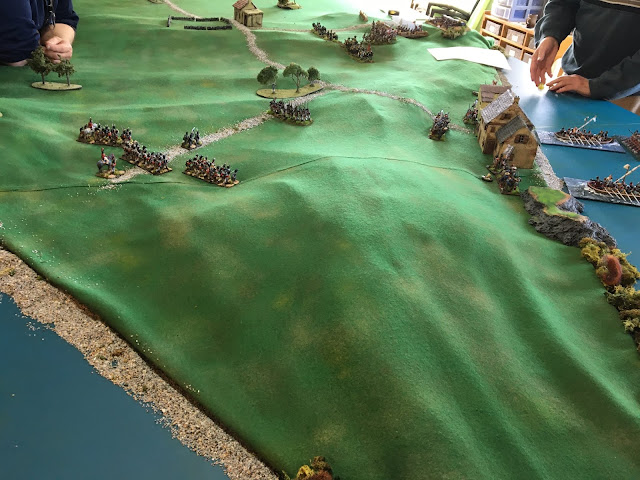 As soon as the boat guns fired, the a Spanish troops on the ridge beside the shore battery were alerted and formed up. Soon after the troops in the distant village were called to arms. 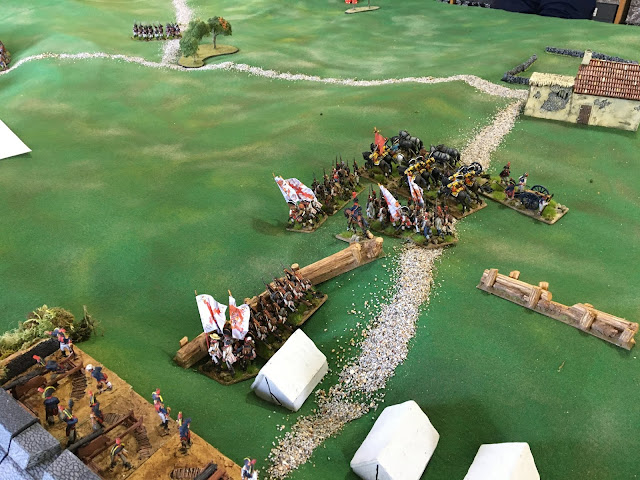 As the British formed two battalions of Spanish regulars came down off the ridge and opened fire, inflicting some loss on one of the battalions. 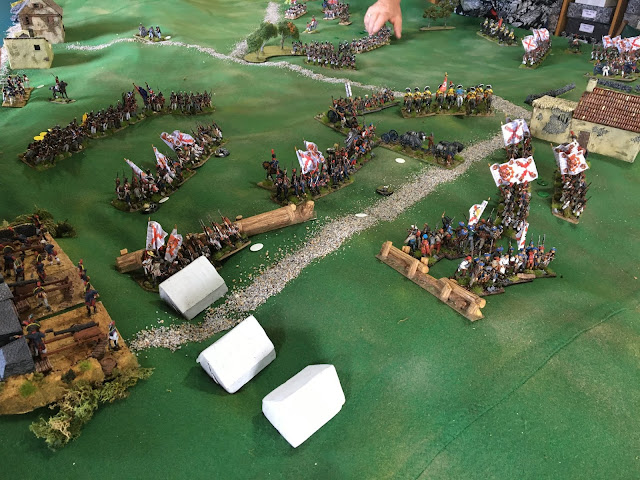 The British soon counterattacked, with the Marines striking the left flank of the Spanish force, while a line battalion attacked the right. The left collapsed quickly, but the right held on for longer... 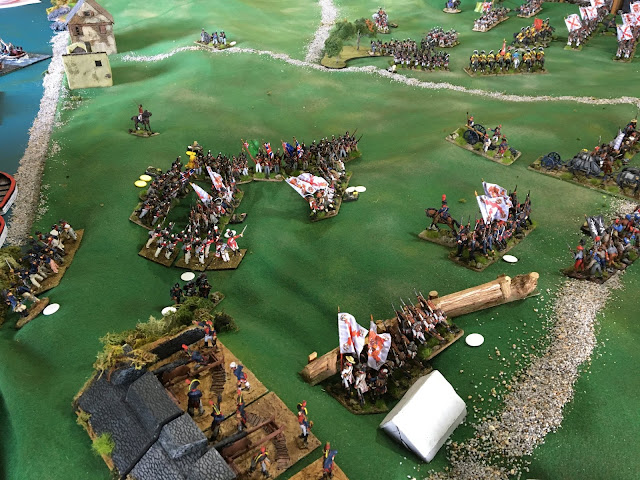 ...but it didn’t last long before it too was driven off. 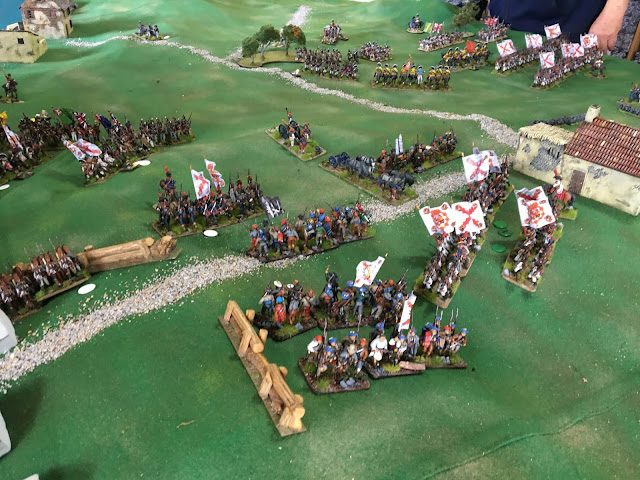 With the Spanish forced back to the ridge, the British Third Brigade and the Navy troops were free to advance. 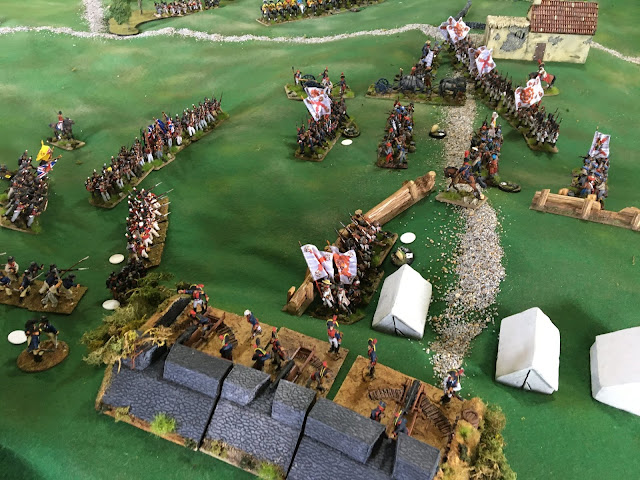 Opposite the British First and Second Brigades regiment of Spanish dragoons charged. The British decided to receive the charge in line and their volley disrupted the cavalry, but the troopers crashed into the line all the same. A desperate fight ensured and against all odds the cavalry prevailed. The British infantry scattered to the wind, but the dragoons were spent and withdrew to rally. 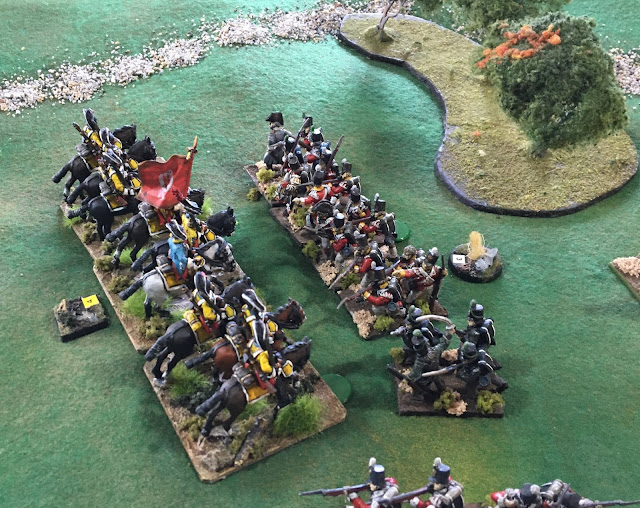 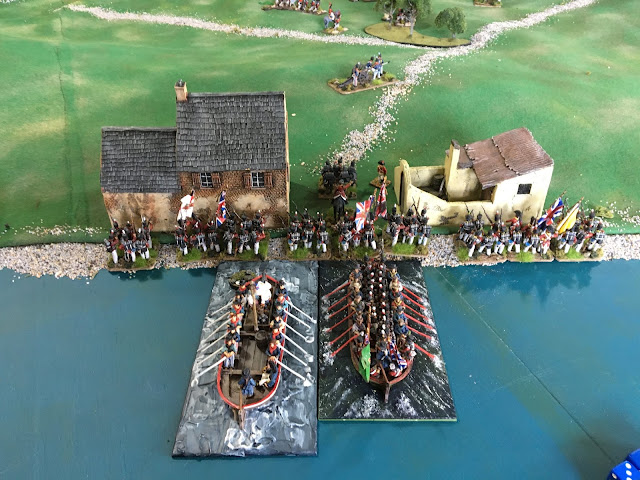 ...and approaches (top left in the image below)

The Naval force approached closed in on the weakened defenders of the shore battery and after a short fight carried the position. 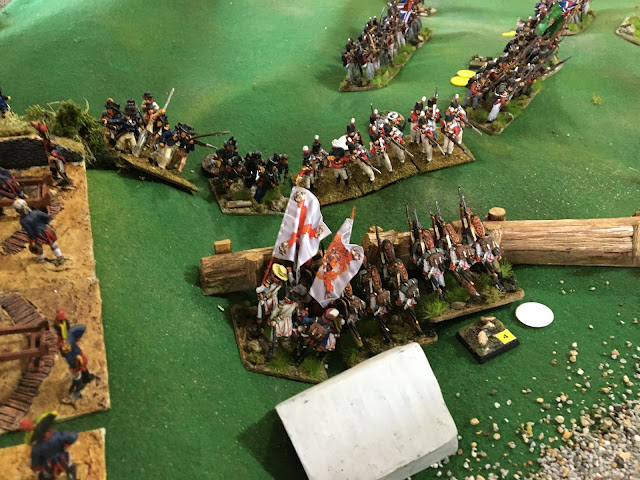 Even though the battery had fallen the Spanish attacked vigorously. The fight swayed too and fro. The Spanish had some success, but even their best troops were lower rated than the British and the British lines held. 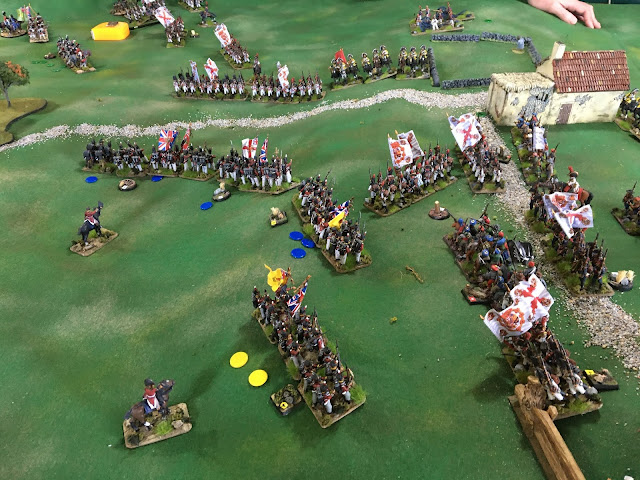 Having destroyed the shot battery the army began to withdraw under the cover of a frigate the army. 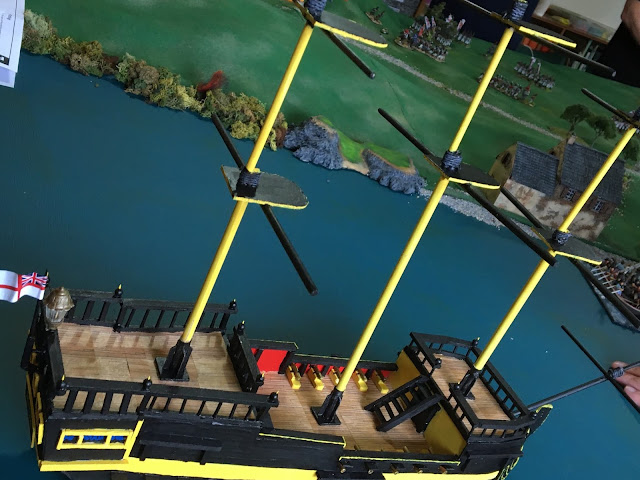 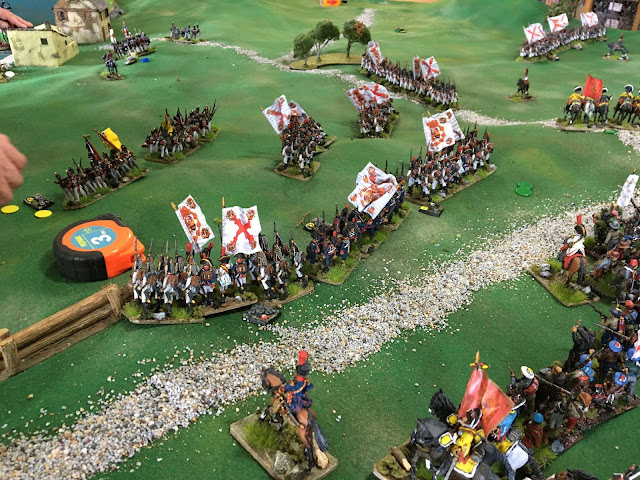 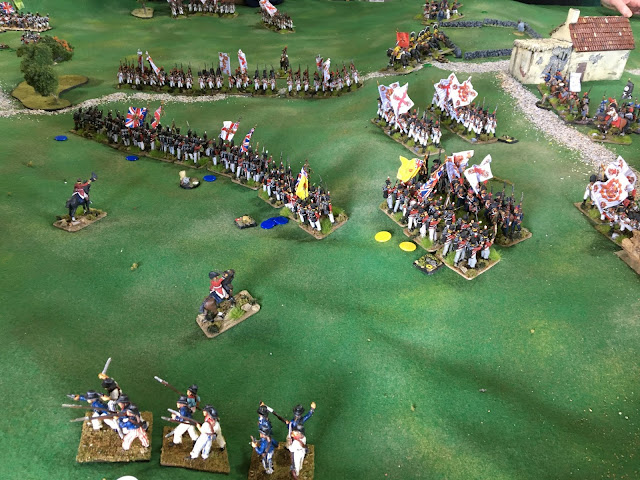 In the end while the British did manage to destroy the shore battery, they took heavy losses, with six of their thirteen battalions driven from the field, presumably they routed back to the boats, and another three were in a poor state.

But it was a fun day, enjoyed by all.