Yesterday on a very humid summer’s day nine of us, eight players and an umpire, gathered around a large table in West Auckland to play a War of Spanish Succession wargame. For my sins the umpire made me Marlborough and commander of the Allied army. After lecturing my subordinates how they must refer to me as “Your Grace” I set up my plan.

The table was bisected by a shallow stream that ran east-west. A large wood lay on the southern end of the field and a village on northern end. Believing that there was an opportunity to control the north end  of the field with artillery, supported by a portion of the main army and the reserve, I decided to  strike south of the stream with the bulk of the army. The  deployment was as below. 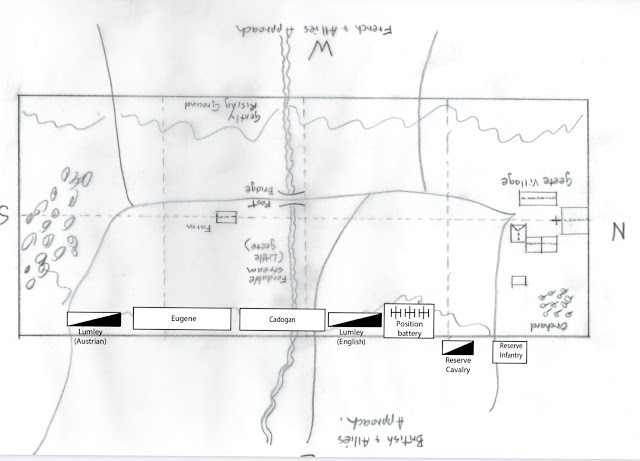 Sadly the enemy was not as obliging at I thought they might be and they held the bulk of their force North of the stream, holding only a brigade of Bavarians and most of their cavalry to the south.

And so the game began. 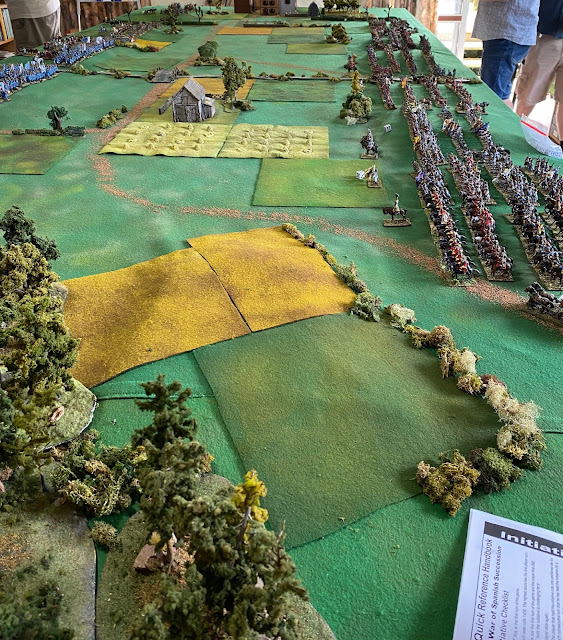 The view up the table from the south with our glorious forces on the right. 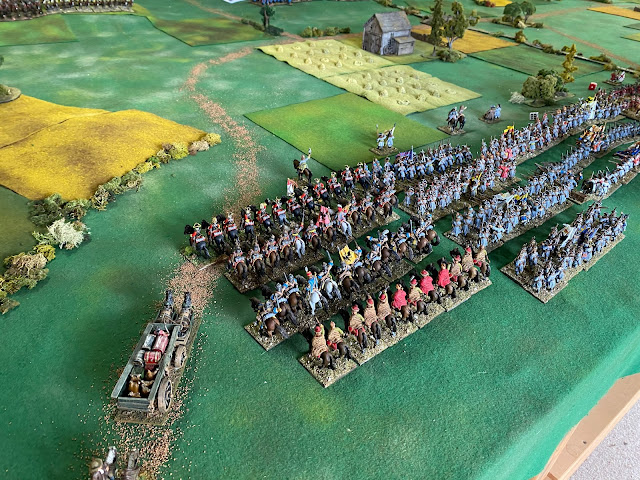 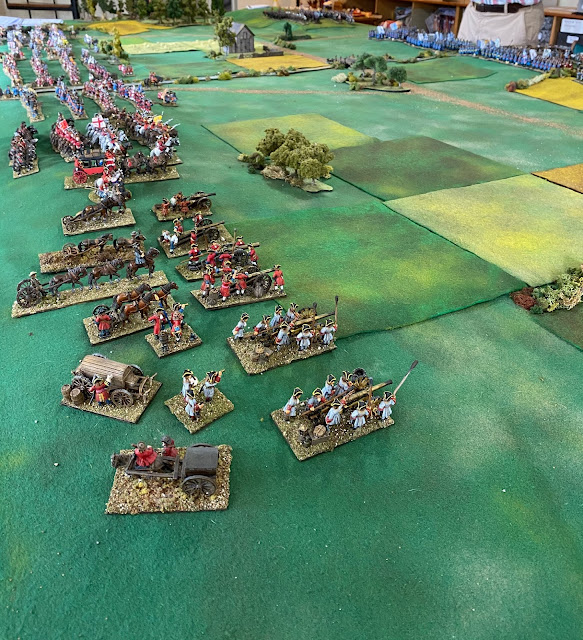 Looking south along the Allied line.

The action started on out left as the Austrian infantry moved forward keeping a solid front against the Franco-Bavarian cavalry. The cavalry tried to smash through the Austrians, but only succeeded in pushing back a battalion of infantry for a heavy loss. 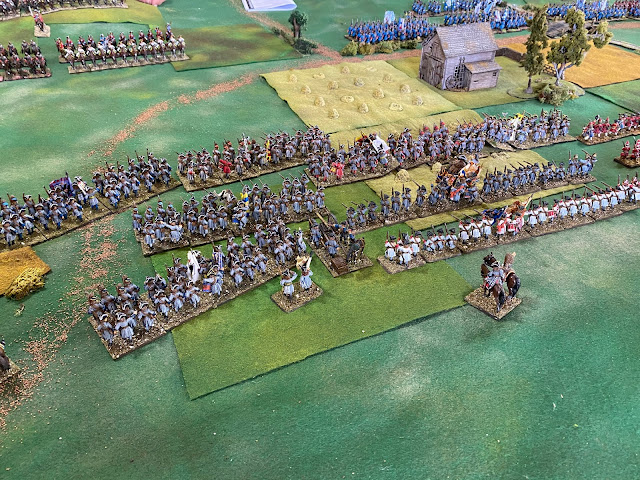 At the same time the Anglo-Dutch moved forward against the Bavarians. 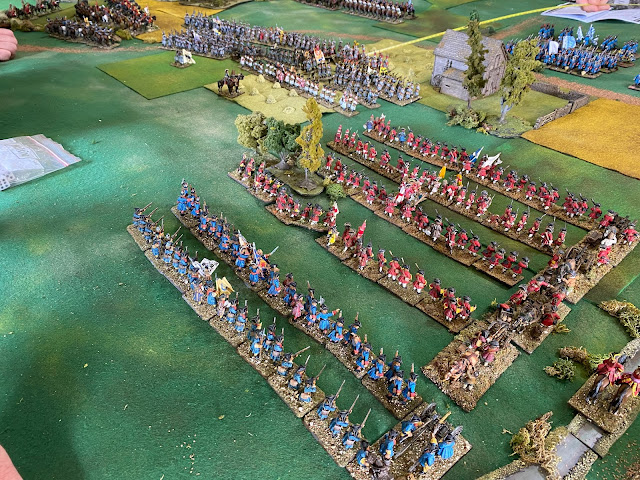 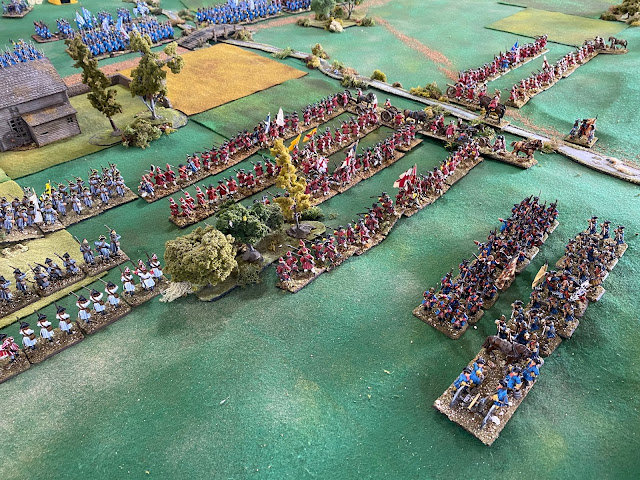 But as the British advanced north of the stream the French infantry moved to the attack. Although raked by the Anglo-Dutch artillery, the French got the jump of the Foot Guards and stopped them dead, but were not driven and the French attack stalled. 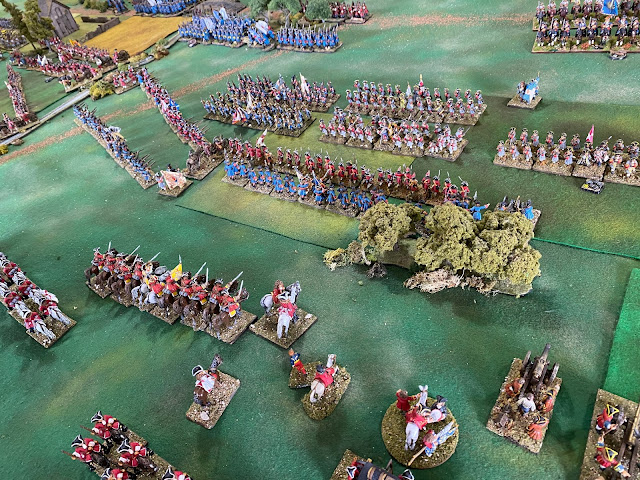 The French then found themselves trapped in a vortex of musketry and artillery fire and collapsed.

Finally the Anglo-dutch reserve force arrived, exactly the same time that the French reserve arrived, and almost exactly opposite each other. 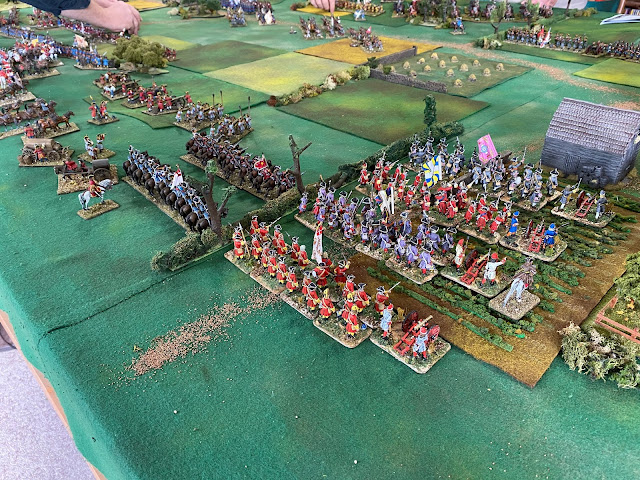 The two reserve cavalry forces shaped up against each other and my Dutch troopers got the jump of the French and charged one regiment in the flank. Despite having all the advantages in my favour the dice Gods were not kind to Anglo-Dutch arms and the French didn’t break -  instead they turned to face in the second round of the fight and drove my boys off, taking with them another regiment of cavalry and a couple of guns. Thankfully the Swiss infantry, in Austrian service, held their own and repelled the cavalry.

Lumley’s horse then entered the fray and was perfectly poised to sweep the field...but its first attempt was an abysmal failure thanks to rolling a “1”.  A second attempt was more successful and the French cavalry were driven off, although Lumley’s force was largely destroyed in the process. 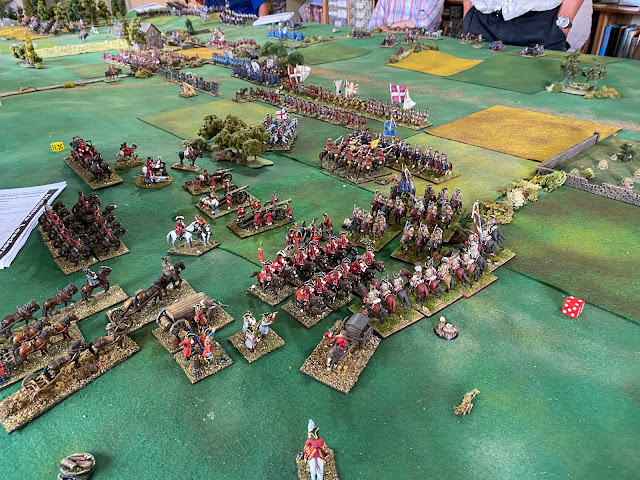 In the centre the Austrians and British infantry slowly pummeled the Bavarians and after an extended fight the Bavarians decided they had had enough and quit field. On the far left the French cavalry continued to try to smash through the Austrian infantry, but despite some minor success could not drive the infantry off.

By now both sides were fought out and an end was called. The Allied forces had an edge, but not a decisive one. Both sides claimed victory.

For another view of the same action, see Keith’s (Eugene’s) report here with a lot more pictures than Ibtook.
Posted by Mark Strachan at 22:14