The American Civil War strategic game I described a couple of posts ago (link)  has commenced.

Instead of four players per side we had three so one player was seconded to play the dual role of CinC and a field commander. The role of CinC will change at the end of each Winter turn.

The CS CinC had complete discretion with his thirteen brigades. He chose to four brigades in Richmond, two in Nashville, two in Memphis and five in Northeastern Arkansas. 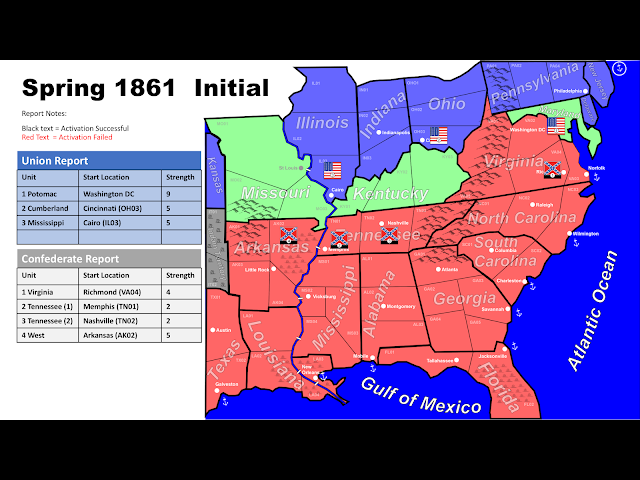 The US intended to fortify Cincinnati with two brigades and, unwilling to break Kentuckian neutrality, shift three brigades to Cairo, while five brigades from Cairo were to move across the Mississippi to St Louis. In the East the Army of the Potomac was to fortify Washington with three brigades and attack Norfolk with six.

The CS intended to fortify Richmond, defend Tennessee by fortifying Memphis, while the Army of the West would take St Louis.

So what happened. I rolled successful activations for all but the Army of the Potomac. In Virginia, the Confederates fortified Richmond while in Tennessee they abandoned Nashville and fortified Memphis. The Army of the Cumberland fortified Cincinnati and reinforced Cairo, while the US Army of the Mississippi crossed into Missouri where they met the CS Army the West at St Louis. Since both armies entered Missouri, the local militia was raised and the US and CS gained two brigades each.

In the Battle of St Louis the Confederates were defeated and suffered a loss of one brigade . The US force suffered no loss. 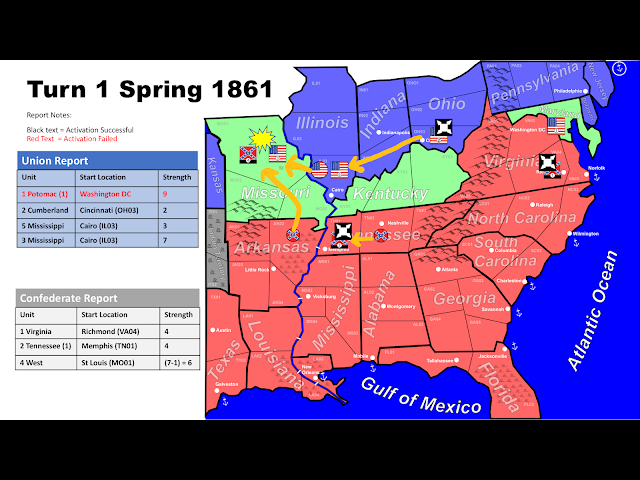 In the next move, Summer 1861, both sides are reinforced, Kentucky remains neutral, movement restrictions are removed and the US gets a navy.
Posted by Mark Strachan at 01:57