Attentive readers may remember that just six weeks ago I agonized over whether to collect a Danish or Bavarian Napoleonic force. The decision of course was Bavarian and the first figures arrived three weeks ago.

My intention was to build a force from 1813, organized from the order of battle for the Battle of Hanau, the 3rd Division to be precise. I chose that division because with six line, two militia battalions and two batteries it makes quite a nice little force to work as an ally. Those six line battalions come from five different regiments, so there is a nice mix of facing colours. But when the order arrived I realised I had ordered light infantry command instead of line.

This forced a rethink. The only light infantry at Hanau were in the 2nd Division. Yes I can make it work: there are four line, two light, four militia battalions and two batteries. The only disappointing thing is that the line battalions are from just two regiments, reducing the variety of facing colours.

The 1st was painted with the contrast colours and I don’t like the result. I struggled to get definition on the crossbelts and the whole effect is grubby.

The 5th and 6th combined battalion  I have done using my more traditional method and I am much happier with them. This battalion has two command stands so that if I want to break the single battalion into smaller units I can. 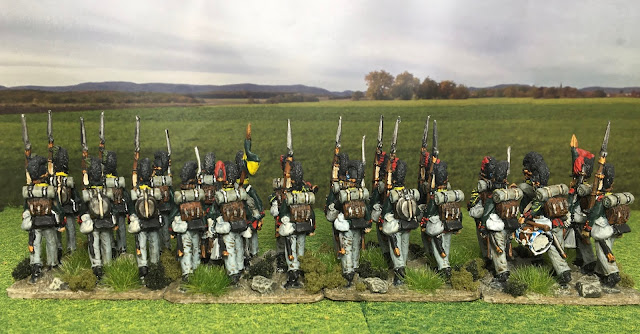 This experience of working the Contrast Paints has settled my view on how I should use them and that is as support for my normal style. I think the white provides an excellent finish over a base white and I like the way the red can be used to either provide a dull brick red or be built up to a very intense bright red. The browns provide some excellent horse tones and the yellow gives as an excellent single coat colour over a white or light bone base coat.
Posted by Mark Strachan at 16:56