Sunday’s regular scheduled game was a Peninsular War battle set in 1807 in which my Spanish had their first outing.

The game was set up with my Spanish in a central position covering the road to Madrid. Their objective was to hold the British until a large French force could arrive.

I had ten battalions in two brigades, a brigade of two regiments of dragoons and four guns.

I did not have exact knowledge of where or when the French would arrive, but I had in my deployment zone a wonderful broad ridge that I chose to hold my entire force behind, with just the artillery on the crest. 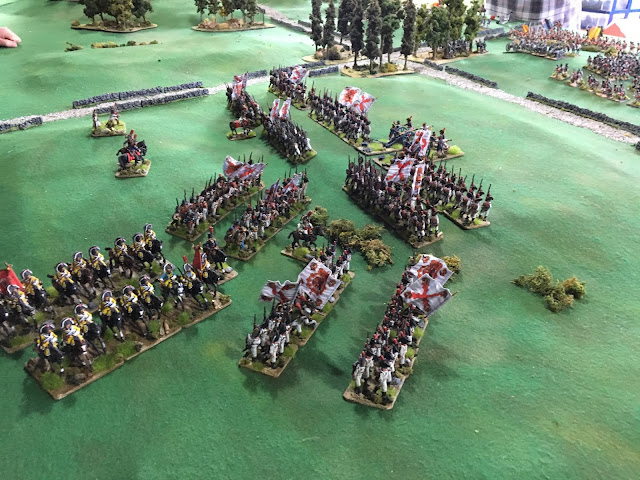 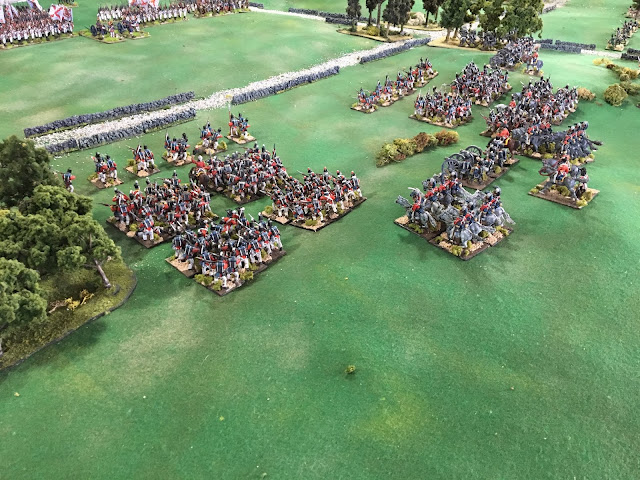 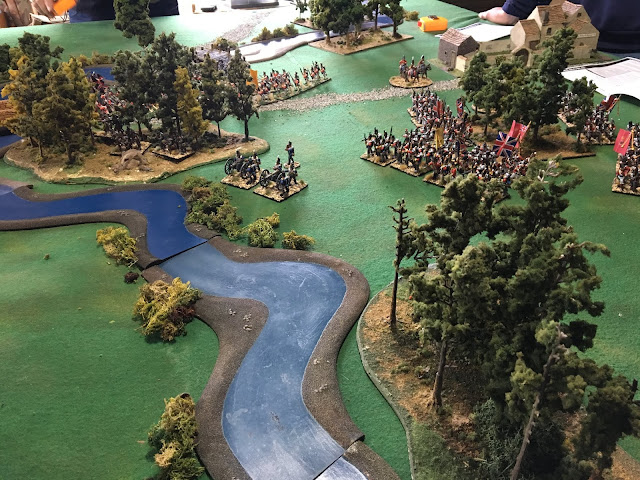 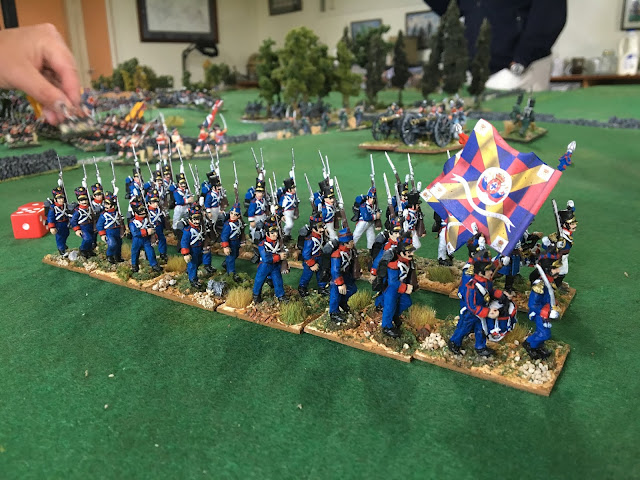 The action started in the centre when the massed British artillery blasted my guns, causing significant damage in the first salvo, but my main force remained protected from their fire by the ridge. When the British on my right moved to extend along the river, clearly intent on gaining my right rear, I shuffled the cavalry in that direction in the hope that I might be able to catch them in some disarray when they crossed the river. 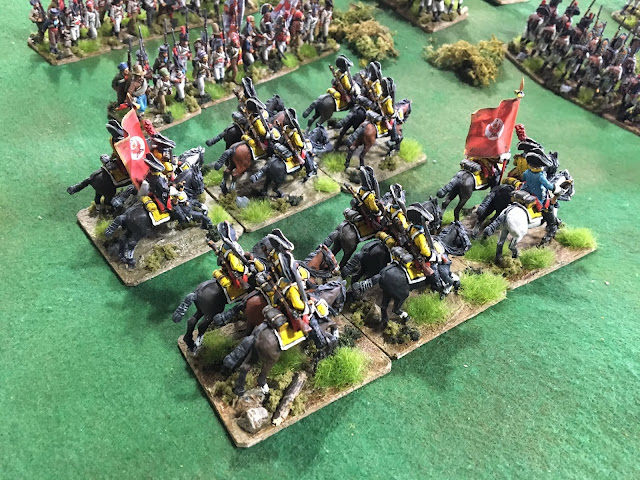 Meanwhile in the centre the British infantry moved forward boldly despite taking some fire from my guns on the ridge.

On my left the third British force was thankfully more concerned with the possible arrival of the French from that direction that with developing an attack against me.

As the threat against my right developed it was suddenly removed when a French infantry division, supported by a small cavalry brigade and some guns arrived behind the British, compelling that force to turn at least one brigade back to face the threat. On the opposite flank the threat of another French arrival held the British there from moving against my left.

In the centre things began to heat up. Two battalions of light infantry began to advance up the ridge and the rifles slipped through to the woods the left. Seeing the opportunity to disrupt the British advance I pushed forward two battalions of Spanish infantry against one of the light battalions and opened fire. To my surprise the fire, supplement by some canister from one of the batteries, was effective the British were disrupted. When we took the initiative in the next turn I charged forward and routed the disrupted unit. It routed through another unit immediately behind, shaking that unit,  and I broke though onto it. That unit too broke and ran to the rear. 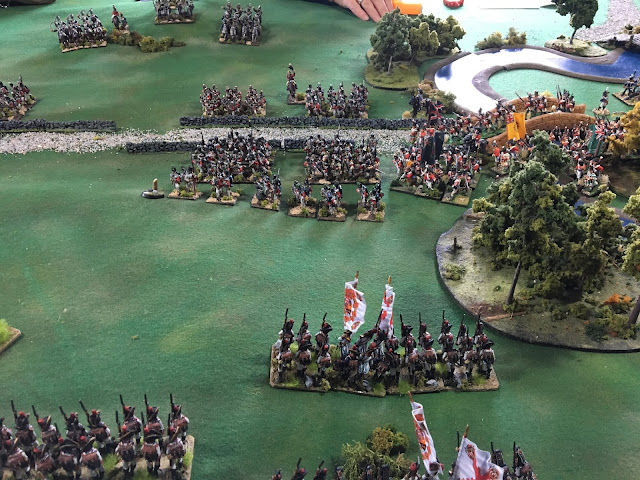 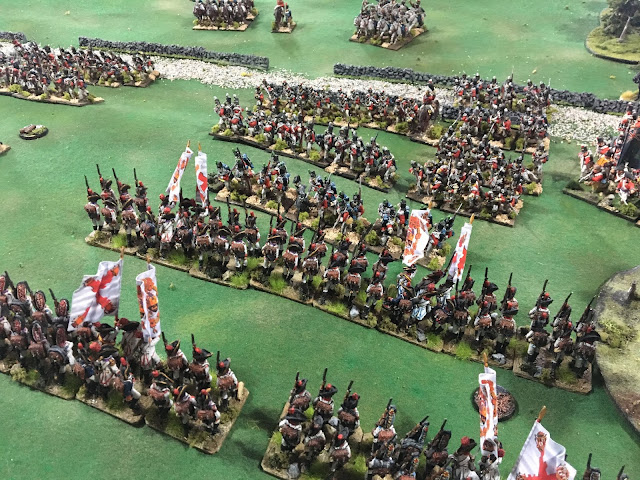 In the next turn a British battalion from across the river attempted to drive off the right hand unit of my advanced battalions, but it had been unable to form into line and could not bring its full force to bear. What should have been an easy victory for the British developed into an extended tussle that resulted in the British being pushed back. At the same time another British battalion, that has been passed through by the other two routing units, turned tail and ran. 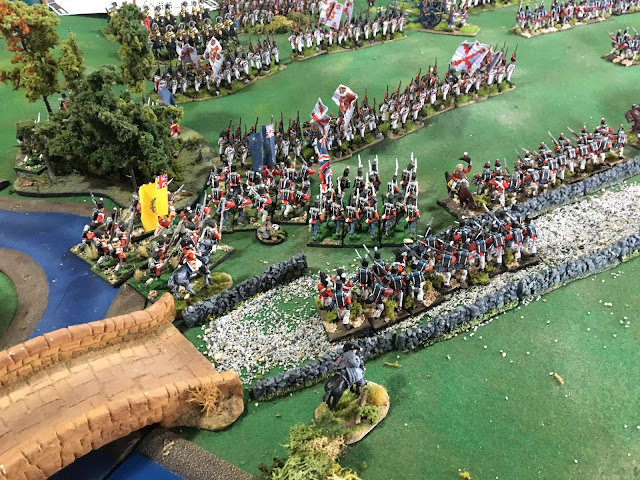 To my right, across the river, the French were struggling against the British, despite some initial success the held them in check, until superior numbers came in to play. One British brigade eventually collapsed, while the other managed to get itself tangled up in the difficult terrain around one of the bridges before clearing out my two advanced battalions. 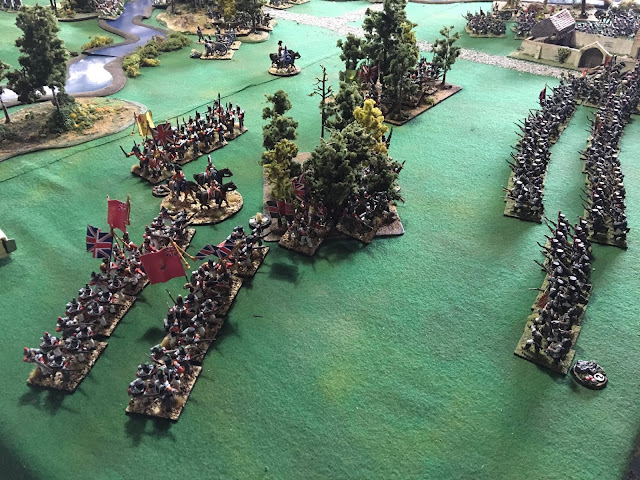 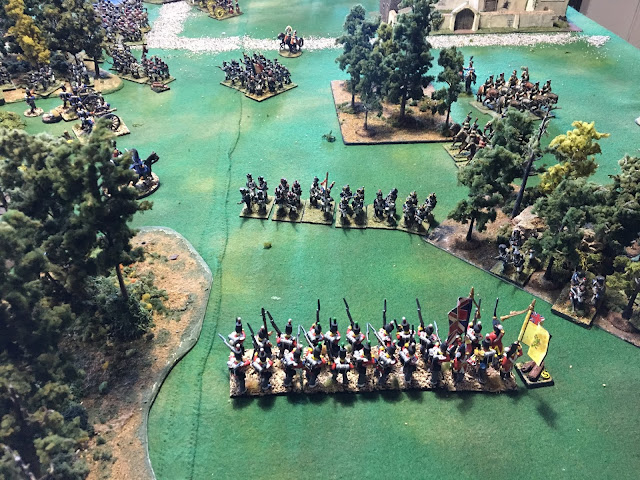 On my left things began to look more threatening for me. While I managed to roughly handle the rifles, supported by two other battalions they made a determined advance. The British left hand battalion was cut to pieces by canister and musketry and was easily repulsed. The next British battalion should have had an easy fight, but I rolled well and the enemy did not and this attack too was repulsed. The rifles, that were in poor shap and should have been easily defeated, drove off the Spanish in front of them and then swung onto the flank of the next Spanish battalion in line. However, despite having all the factors in their favour, the luck of the rifles ran out and the best they could do was score a draw, that meant that next turn the Spanish could turn to face and fight them on slightly better than equal terms. What had looked to me like an impending disaster had been suddenly turned around. A determined push from my battalions drove off the British. 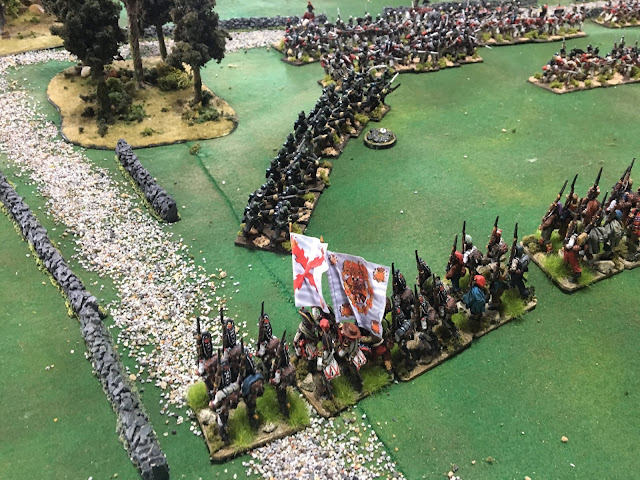 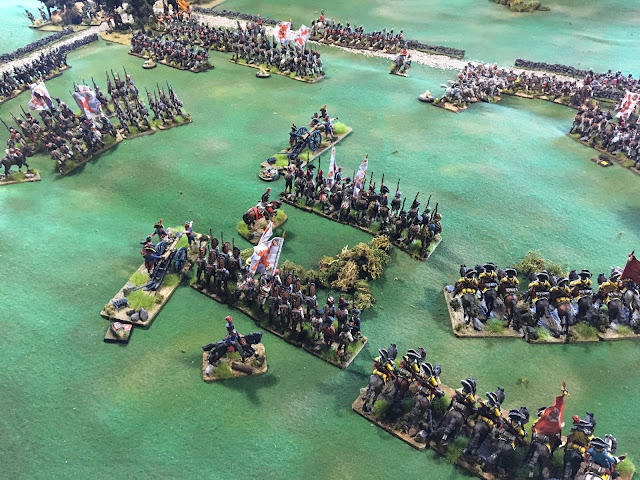 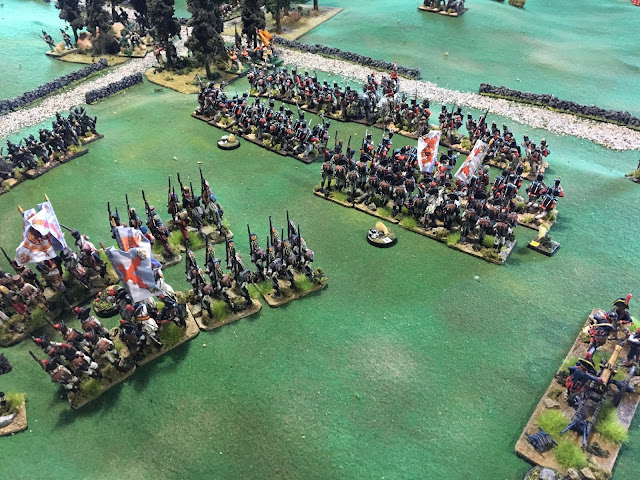 On my right two of my remaining battalions became engaged in an inconclusive fight with some the British that had advanced across the bridge from the right. 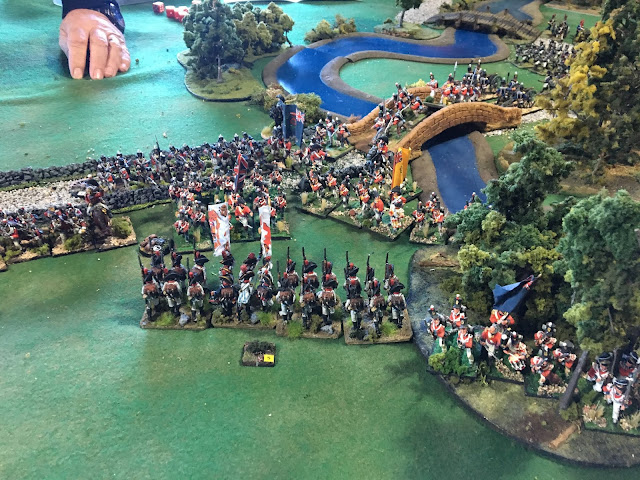 On the extreme let the French second division had arrived and opened fire on the British right, but before they could advance from their elevated position the game was called as a British defeat. 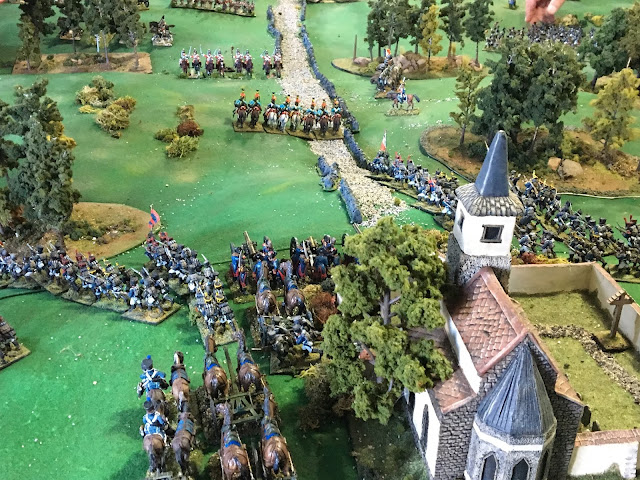 The Spanish had had an auspicious start to their gaming career. I had given them some tactical disadvantages – made the clumsy in their manoeuvring and placed some disadvantage on their musketry, but perhaps allowed them to be more effective than they should have on close combat. But then again I did hold an excellent position that I was able to exploit to my best advantage.
Posted by Mark Strachan at 09:33

Email ThisBlogThis!Share to TwitterShare to FacebookShare to Pinterest
Labels: Wargames